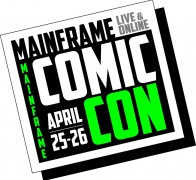 — Mainframe Comic Con is coming to a computer screen near you. The fully online con will broadcast live from Chicago Comics on April 25 and 26 and will feature virtual appearances by guests like Agents of S.H.I.E.L.D.‘s Clark Gregg, Tim Seeley, Kevin Smith, Bosslogic, J.M. DeMatteis, Joe Hill, Ron Marz, and more. BOOM! Studios and AHOY Comics have also signed on to participate, with AHOY “sending” Tom Peyer, Stuart Moore, Mark Russell, Richard Pace, and Mariah McCourt. Mainframe will also supposedly include all the usual activities you expect from a con, including interviews, a virtual artist’s alley, cosplay contests, and live comic book auctions. The full schedule of events has not been released yet.

— First Second announced Comics Relief: A First Second Festival, a virtual festival that will take place April 18 from 11am to 5pm ET. It promises to give fans “an in-depth look at the key moments in comic creation,” and will feature creators such as Lisa Brown, Lucy Knisley, Kat Leyh, Ngozi Ukazu, Lily Williams, Karen Schneeman, and Gene Luen Yang. Pre-registration is available on First Second’s website.

— Rebellion announced a revised publishing schedule due to restrictions in place, because of COVID-19. Printing of both 2000 AD and Judge Dredd Megazine will continue as scheduled. However, many of their upcoming graphic novels will either be delayed or published digitally first. For a complete list, click here.

— Weekly Shonen Jump has delayed its upcoming issue #21 after discovering a member of the editorial staff contracted COVID-19. Instead, issues #21 and #22 will be combined into a single release available April 27. Issue #20 will still be released on April 13 as planned.

— Francesco Francavilla posted a free four-page comic on Twitter, titled “Invasion!” The new content was welcomed by fans, who are spending another New Comic Book Day with nary a release in sight.

— Marvel is planning to release “Marvel Love and War by Jack Kirby Omnibus,” a 592-page hardcover collection of Jack Kirby’s war and romance comics. It will include work from “Battleground,” “Battle,” “Yellow Claw,” “Sgt. Fury,” and more. According to the Amazon listing, it is set to release December 22, 2020.

— Kevin Conroy, a.k.a. the voice of Batman, is reading “Batman: The Adventures Continue” live on DC’s Instagram account today at 10am Pacific Time. You can download a digital copy of the first chapter of the comic written by Alan Burnett and Paul Dini from DC if you want to read along with Conroy (or perhaps read at your own pace).

— The Kubert School is waiving its application fee for the upcoming 2020-2021 school year, according to a press release issued by the school. Students looking to apply throughout the month of April can enter the code Fall2020 in the payment receipt number section. Founded by Joe Kubert, The Kubert School offers students education in cartooning and graphic arts.

— Finally, Erik Valdez has signed on to play Kyle Cushing, the husband of Lana Lang, on The CW’s Superman & Lois. According to Deadline, “Cushing is Smallville’s fire chief and local hero who’s seen his fair share of tragedy. Small town raised with small town beliefs, Kyle doesn’t care much for the big city and often butts heads with people that come from it.”