In case you missed these stories: Marvel’s Invisible Woman is getting her first solo series, First Second Books announced a new line focused on history, Dark Horse Comics has a new manga-inspired book in “No One Left,” BOOM! announced a new “Angel” series, and AfterShock announced “Knights Temporal,” a new book from Cullen Bunn and Fran Galan. 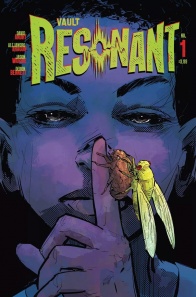 – At The Beat, Vault Comics announced “Resonant,” a new sci-fi thriller written by David Andry with art by Alejandro Aragon (“Death Orb”). Described as The Odyssey meets “Y: The Last Man,” the comic follows a father trying to get back to his children a decade after the world was plunged into chaos by the “Waves,” which causes people to act on dangerous impulses. The first issue comes out this July.

– DC Comics is releasing their entire digital catalogue of Golden Silver and Bronze Age comics onto the DC Universe Service this week. They are referring to this release of nearly 3000 books (spanning the 1930s to the 1970s) as a stress test in preparation for opening the full library.

– Newsarama has a first look at Sean Murphy’s upcoming sequel to last year’s “Batman: White Knight.” It was announced “Batman: Curse of the White Knight” will take us deeper into this alternate universe from DC Black Label for eight issues, and that it will start on July 24th.

– Cullen Bunn is returning to Marvel and Venom for an ‘Absolute Carnage’ tie-in story about Mania, the character he created with Declan Shalvey. “Web Of Venom: Funeral Pyre” will tell the tale of Carnage’s hunt for Andi Benton, the woman who used to be Mania. Bunn will be joined by artists Alberto Albuquerque and Josh Cassares for this story.

– Comics creators Josh Neufeld and Dean Haspiel have started a new podcast called Scene by Scene, which is dedicated to the film version of Harvey Pekar’s “American Splendor.” Both artists worked with Harvey Pekar on various projects and pooled their experiences and knowledge of his work in their inaugural episode of the podcast, which you can listen to here.

– Kyle Higgins, Alec Siegel and Rod Reis’s 2016 comic “Hadrian’s Wall,” is being adapted into a movie by Higgins himself, who is attached to write and direct. The interstellar noir story, published by Image, told the story of a detective investigating the murder of his ex-wife’s husband on a distant survey ship.

– The first teaser trailer for the upcoming animated Addams Family film was released, giving us our first taste of Oscar Isaac and Charlize Theron as Gomez and Morticia. The Addams Family will be released in theaters on October 11, 2019.

Welcome back to The Rundown, our daily breakdown on comic news stories we missed from the previous day. Have a link to share? Email our team at rundown@multiversitycomics.com.In case you missed it, we covered:– Marvel’s reveal that the New Fantastic Four will return in “Fantastic Four” #22, one of many new “Empyre” tie-ins announced yesterday.– […]