In case you missed it, Legendary Comics announced “Godzilla vs. Kong” prequels, and we had our second conversation with Curt Pires. 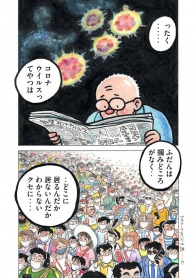 — Kodansha Ltd. announced the creation of a massive manga project chronicling life in the era of COVID-19. “Manga Day to Day” will feature over 50 artists who will produce one comic strip a day, available to read for free at Kondansha’s Comic Days website and on Twitter starting on June 15 (all in Japanese). The first strip is drawn by Tetsuya Chiba of “Ashita no Joe.” Kodansha plans to eventually release the manga strips as a book in 2021.

— The Children’s Tumor Foundation (CTF) and Bottled Lighting have released a special 8-page digital comic to commemorate NF2 Awareness Day, which was May 22. “Understanding NF2,” written by Vanessa Shealy Younger (Director of Communications for CTF) and illustrated by Kevin Colden (“Fishtown,” “The Crow: Death and Rebirth”), tells the true story of Billy Nguyen, who was diagnosed with neurofibromatosis type 2 at age 6. Billy is now a fourth-year medical student at UCLA, and was involved in the creation of the comic.

— Second Sight Publishing is opening submissions for sci-fi (under their Stellar Comics imprint), horror (under Second Sight Presents) and superhero (under Secondverse) books. They are asking for completed stories, but are also looking to grow a shared continuity universe. For more information on what and where to pitch, check out the full details on Bleeding Cool.

— DC is launching a new solicitations catalog as a result of the “multi-distributor model” they adopted due to COVID-19. DC Connect is a digital-only catalog that features information for comic books, original graphic novels, collected editions, and collectibles, though DC teased that it could include more in the future like interviews, behind-the-scenes content, and preview pages. The first catalog is available to view and download now.

— Adult Swim announced that it’s reviving Tuca and Bertie after Netflix shocked fans by canceling the popular animated series after its first season. It will air 10 episodes in 2021 with an option for additional seasons.

— R. Crumb’s “A Short History of America” comic strip, which first appeared in 1979, is undergoing its latest transformation as a feature in country/rock group Lukas Nelson & Promise of the Real’s music video for their song “Civilized Hell.” The art, as well as the song, chronicles the urban transformation and decay of the American countryside.

— The Science Fiction and Fantasy Writers of America (SFWA) will now allow graphic novelists and comic writers to join. This comes after 95% of current members voted yes to approve the decision. Applicants must work primarily in science fiction and fantasy, though comic writers of “horror and related genres” are open to apply as well. SFWA was founded in 1965 by author Damon Knight as a way to promote, advance, and support science fiction writing in America. The organization expanded to include the fantasy genre in 1991.

— Finally, CBS announced the nominees for the 47th Daytime Emmy Awards, which air on Friday, June 26. Nominees include Batman: Hush, DC Showcase: Death, The Rocketeer, DuckTales, Big Hero 6, She-Ra and the Princesses of Power, Reign of the Supermen, and a whole lot more. CBS leads the pack with 57 total nominations, followed by Amazon Prime with 55. View the full list at theemmys.tv.