In case you missed it, we interviewed Adam Wallenta about his book “Punk Taco.” 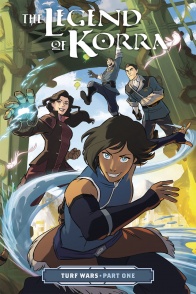 – Following the success of their first livestreamed reading of the first chapters of “The Legend of Korra: Turf Wars Part One,” Dark Horse has announced that they will be doing a second reading from the book tomorrow. Janet Varney (Korra) and Seychelle Gabrielle (Asami) will be returning for the reading, and will be joined by David Faustino, P.J. Byrne, and Mindy Sterling, the voices of Mako, Bolin, and Lin Beifong respectively. The reading will pick up where the last reading left off, covering the next several chapters of the graphic novel. After the reading, you can stick around for a live Q&A with the cast. The reading will be held at 2 p.m. PST on Wednesday, May 27 at Dark Horse’s Twitch channel. If you missed the first livestream, you can catch up with it here ahead of Wednesday’s show.

– Legendary artist Bill Sienkiewicz has confirmed on Twitter that he provided illustrations for the credits sequence in the upcoming film New Mutants. The much-delayed X-Men adaptation was set to premiere on April 3, before being pushed due to the coronavirus pandemic to its new release date this fall. Sienkiewicz was the artist for the “New Mutants” storyline ‘The Demon Bear Saga,’ which was noted as an inspiration for the film by director Josh Boone way back in 2017. New Mutants is (currently) scheduled for release on August 28, 2020.

– Publishers Weekly catalogued a number of notable graphic novel sales this month. First, Imprint purchased the rights to the graphic history “Side Quest: A Visual History of Role Playing Games” from writer Samuel Sattin and artist Christina “Steenz” Stewart. The book will trace the origins of role playing games from ancient China and India, to Europe and the modern versions played today. “Side Quest” will reach shelves in spring 2023. Next, Simon and Schuster picked up the rights to “Lumberjackula” a middle-grade graphic novel from writer Mat Heagerty and illustrator Sam Owen that follows a half-vampire, half-lumberjack who struggles to choose between vampire or lumberjack prep school, when all he really wants is to dance. “Lumberjackula” is due for publication in summer 2022.

– Continuing with graphic novel sales, Levine Querido purchased the rights to “Brooms” from Jasmine Walls and Eisner-nominee Teo Duvall. The YA graphic novel, due out in fall 2022, follows six BIPOC witches in an alternate 1930s Mississippi, who team up to compete in illegal broom races. Little, Brown also bought “Mismatched,” a YA graphic novel from writer Anne Camlin and illustrator Isadora Zeferino. The queer modern-day retelling of Jane Austen’s “Emma” will hit shelves in 2023.

– Finally, two more YA graphic novel sales: HarperAlley picked up the world rights to the debut work from author-illustrator Cait May and author Trevor Bream, “Another Kind,” as well as a second currently untitled work; and illustrator Valeria Wicker has signed on to illustrate the YA graphic novel “Eleanor Rigby” from writer James Patterson. “Another Kind” will follow six cryptid children who are searching for a new place to call home, while “Eleanor Rigby” will follow a teen girl who runs away to Seattle in search of her missing sister and must tell stories on the street to survive. Both books are due out in fall 2021.

– The TV adaptation of the Japanese manga series Midnight Diner will see new seasons come to US Netflix starting June 1. The adaptation of Joji Matsuoka’s manga of the same name first premiered on Japanese TV in 2009, with Netflix Japan picking up streaming and production rights from the original Japanese producer for seasons 4 and 5, which premiered in 2017 and 2019 respectively under the name Midnight Diner: Tokyo Stories. The new content coming to Netflix in June is likely the first 3 seasons of the show, which had to this point not been made available in the US. Netflix had not previously announced the release of those prior seasons, instead quietly slipping the news into the full list of June additions to the service.

– In honor of the release of their new Image Comics graphic novel “Bog Bodies,” creators Declan Shalvey, Gavin Fullerton, and Clayton Cowles will join editor Heather Antos for Bog Fest, a three-hour livestream on YouTube. Shalvey will host the event, talking with his co-creators on the book as well as some unannounced special guests. The stream will be held tomorrow, May 27, from 12 pm to 3 pm EST on Shalvey’s YouTube channel. “Bog Bodies” is also due to hit shelves and digital platforms on Wednesday.