In case you missed it, we interviewed Chip Mosher about the Kickstarter campaign for his graphic novel, “Blacking Out,” and Scott Snyder about life after “Death Metal,” and what is expected from the series, which takes off on June 16th. 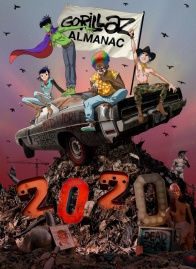 – Popular band, Gorillaz is getting a new comic book titled the “Gorillaz Almanac,” published by Z2 Comics, that celebrates their 20+ year history. The comic will feature 120+ full-color pages that feature Jamie Hewlett’s artwork for the band, along with exclusive new artwork, and the first comic strip to ever star the group. The “Gorillaz Almanac” is available to pre-order now and hits shelves on October 16, 2020.

– Four original drawings by Albert Uderzo, the co-creator of “Asterix the Gaul,” have been sold for around €400,000 to benefit Paris hospitals. Uderzo passed away this March at the age of 92, from heart failure unrelated to the coronavirus. His widow, Ada Uderzo, stated that the charity auction was a way of thanking the heroes on the frontline, fighting the virus on a daily basis. The sold drawings, which included images from “Asterix and the Secret Weapon” and “Asterix and Obelix All at Sea,” were donated to the Paris hospitals as a way to pay tribute to the staff.

– The Comic Book Legal Defense Fund is leading a coalition protesting the removal of a satirical cartoon of Donald Trump by Pulitzer Prize-winning cartoonist Nick Anderson from Redbubble. The online marketplace removed products that featured Anderson’s cartoon, “The Trump Cult,” on allegations of trademark infringement. The Comic Book Legal Defense Fund have issued a letter asking for Redbubble to reinstate Anderson’s product listings to affirm its commitment to First Amendment rights.

– Vault Comics have announced that they are offering return-to-market support for retailers as a part of their Vault Bound initiative. The initiative extends returnability across all of their comics shipping in June and July, and also reduces the price per copy that retailers pay for collected editions and #1s. The initiative aims to reduce retailer risk as much as possible.

– The Kubert School held their annual scholarship awards event earlier this month through a ceremony on Google Meet due to the ongoing pandemic. The Inkwell Awards’ 11th Dave Simons Inkwell Memorial Scholarship Award of $1,000 was awarded to Ryusei Sawada, a second-year student and aspiring artist from Tokyo, whose ultimate goal is to work for Marvel, DC, and Image as an inker and artist. The school director, Carol Thomas, has stated that remote learning will remain in place for the rest of the year.

– Finally, FX has confirmed that the Y: The Last Man television series is still on the lineup, and has also got a new title. Previously referred to as Y, the series will now share the source material’s title, Y: The Last Man. Fans saw the previous title as being too vague and as an unnecessary change from the comic title. The show is an adaptation of the 60-issue comic series by Brian K. Vaughan and Pia Guerra, published by DC Comics imprint Vertigo. Eliza Clark will act as series showrunner, with Nina Jacobson, Brad Simpson, and Vaughan producing. The series stars Ben Schnetzer, Imogen Poots, Diane Lane, Lashana Lynch, Marin Ireland, Amber Tamblyn, and Timothy Hutton.

Evan is a writer, photographer, and filmmaker based in Northern New Jersey. He aspires to write for film/TV and to create his own comic book series. When he's not working on his craft, he can be found reading, watching movies or binging shows, playing PS4, or drinking coffee. He can be found on Twitter @evtylerjohnson.