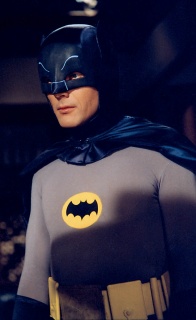 – Kicking off tonight, we learned of the passing of TV legend and the first actor to play Batman on the big screen, Adam West, after his brief battle with leukemia. In memory of his death Los Angeles Mayor Eric Garcetti will light the Bat-signal over the city tonight following a special ceremony beginning at 7:30 PST attended by special guests and LAPD Chief Charlie Beck. The signal will remain lit for a period, so for any readers in the area please attend and take pictures and post them in the comment section so that we as a Multiversity community may continue to mourn and celebrate our hero.

– Also with the passing of Adam West this weekend, many were left to wonder about the announced Batman vs. Two-Face animated movie that was a sequel to last Fall’s Return of the Caped Crusaders which was set in the world of West’s Batman ’66 television show. Word is thought that West completed voice work on the film before passing, and we will probably hear more news around SDCC. Batman vs. Two-Face features voice work from West and William Shatner as the titular villain.

– In Justice League news, the great Danny Elfman has come on to finish scoring the rest of the movie, finishing the work of Junkie XL who scored Batman v. Superman: Dawn of Justice and is reported to be moving onto the Tomb Raider reboot. Elfman is a DC movie veteran having scored Tom Burton’s Batman and Batman Returns. He has also worked well with Joss Whedon who has been brought on to help with post-production following Zach Snyder stepping away due to family tragedy. Perhaps the rebirth of the DCEU is not far off…

– As if Avengers: Infinity War was not already stuffed, actress Danai Gurira will reprise her Black Panther role as Okoye, leader of the elite bodyguards the Dora Milaj. This follows the reveal that Chadwick Boseman, Winston Duke and Letitia Wright will all also appear in the film and suggests that perhaps a chunk of Infinity War will take place in Wakanda. Black Panther‘s first trailer dropped last week and you can check it out here. Black Panther is in theaters February 16, 2018 with Infinity War following on May 4, 2018.

– In more MCU news, Kevin Feige has put a pin again in the idea that the Fantastic Four could appear in the MCU in a similar way that Spider-Man will in the upcoming Spider-Man: Homecoming due to Sony and Marvel Studios deal. Feige stated, “”[We have] no plans with the Fantastic Four right now. No discussions about it.” The sequel to the 2015 reboot of the First Family was originally scheduled for last weekend, June 9th. Will the team ever get the respect they deserve on the big screen? And for that matter, where are they in the comics?

– The circus has arrived folks! Billy Zane has been cast as P.T. Barnum, founder of Barnum & Bailey Circus, in an episode of the third season of Legends of Tomorrow. This casting reunites Zane and series regular Victor Garber (Martin Stein) in their first appearance together since Titanic. Executive Producer Phil Klemperer described Zane’s Barnum as “A guy who made things ‘go viral’ before that was a thing.” Season three premiers October 10, 2017.

– Valiant announced today a #0 issue of “Ninjak” for September being written by previous “Ninjak” writer Matt Kindt with art in his sections by Francis Portela, as well as by the November launching “Ninja-K” team of Christos Gage and Tomas Giorello. This 40-page issue will tie up loose ends from Kindt’s long run on the character and build bridges to Gage and Giorello’s new run, making it the perfect jumping on point for the character.

– Image revealed a new series by Si Spurrier and Caspar Wijngaard called “Angelic” about a future where genetically modified animals have inherited a post-apocalyptic world. Image described the series as “WALL-E by way of Watership Down,” and will follow a flying monkey Qora who wishes to see the world. The series launches in September and you can check out preview pages here.

– Two big Rebirth mysteries are set to finally begin to be answered in September in both “Action Comics” and “Detective Comics.” In advanced solicits for DC’s September books it was revealed that Tim Drake will return in a new storyline titled “A Lonely Place Of Living” in #965 from James Tynion IV and artist Eddy Barrows, while “Action Comics” #987 kicks off “The Oz Effect” from Dan Jurgens and Victor Bogdanovic that will finally reveal the identity of Mr. Oz and feature lenticular covers.

– Canadian actor Jay Baruchel has been named Chief Creative Officer of Canadian publisher Chapterhouse Comics (lot of alliteration there ay?) This announcement comes on the heels of Baruchel co-writing the Free Comic Book Day one-shot “Captain Canuck: Year One.” Baruchel stated, “What started with a conversation about bringing Captain Canuck to the big screen very quickly evolved into my asking Fadi if I could invest in Chapterhouse.” The actor is most well-known for his roles in films like How To Train Your Dragon and This Is The End.

– IDW Chief Creative Officer tweeted a picture of a lunch announcing that former Vertigo editor Joe Hughes has joined the company as an editor. Hughes comes to IDW from serving as an assistant editor on DC’s Vertigo imprint from 2009-2012, as well as serving as Editor-In-Chief of the recently defunct ComicsAlliance website. Hughes will report to IDW’s newly promoted EIC David Hedgecock. Congratulations!

– Finally, with all the nuttiness that was “Dark Days: The Forge” #1, the first of two prequel issues to DC’s summer event “Dark Nights: Metal,” CBR has compiled the first of two lengthy annotations of the issue. The prequel had at least three universal twists dating back to decades of DCU continuity and definitely deserves the deep scrutiny. If you have not read “The Forge” and don’t wish to be spoiled avoid the article! The next of the prequels, “Dark Days: The Casting” #1 arrives July 12 with “Metal” #1 coming August 16.