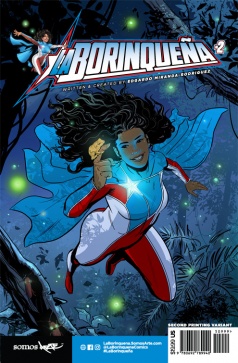 – Puerto Rican superhero La Borinqueña will return in a second graphic novel. The character was created by writer Edgardo Miranda-Rodriguez in response to the humanitarian crisis affecting the Puerto Rican people, and debuted in January of last year in a self-published graphic novel. She later appeared in the DC anthology “RICANstruction,” which benefited rebuilding efforts in the U.S. territory after Hurricane Maria. Miranda-Rodriguez is joined by artists Will Rosado and Manuel Preitano in this second entry in the series, and it will debut on June 10.

– GameStop may be entering the direct market soon. The company is going to start carrying comics in 40 of its GameStop and ThinkGeek locations as a trial run starting this month. When asked about the initiative, GameStop buyer James Parker said, “The comics are mostly from Marvel and DC with a focus on key series and titles. This is just a small launch to bring comics to some of our collectibles stores as they fit with the current trend of Collectibles that are performing in the market.”

– The 2018 Bob Clampett Humanitarian Award has been given to Seattle-based non-profit organization Comics4Kids, and Frederick Joseph. Joseph created a GoFundMe campaign to raise money for black children in Harlem to go see Black Panther. GoFundMe later reported that around 100 additional campaigns inspired by Joseph’s raised over $900,000 to send 70,000 kids to see the film. The Award, given out by the San Diego Comic-Con, honors “people in comics and the popular arts who have worked to help others.”

– Marvel has teamed with ESPN for a series of short comics about the stars and storylines going into this summer’s World Cup. The 13 Webtoon-style chapters were written by Fabian Nicieza, with “illustrations by Marvel.” (Which turns out to be penciler Diego Bernard, inker J.P. Mayer, colorist Andrew Crossley, and letterer Joe Sabino.)

– “The Walking Dead” is getting a 15th anniversary box set this October. The giant collection will feature the three compendiums with new cover art, and an expanded edition of the “Here’s Negan” trade paperback with previously uncollected origins for Michonne, Tyrese, the Governor, and Morgan. All the content brings the total page count of the set to over 3,300. It will be Released on The Walking Dead Day, October 13.

– Telltale Games and Skybound Entertainment announced that episode one of The Walking Dead: The Final Season will debut on August 14. The title will be available on PC, PlayStation 4, and Xbox One, with a release for the Nintendo Switch “later this year.”

– Keiynan Lonsdale has elaborated on earlier reports that his character Wally West would not be a series regular in Legends of Tomorrow‘s fourth season, saying that “my heart told me it was the right time to continue my journey on an unknown path.” He also confirmed that the character may still make appearances in the CW DC universe in the future.

– Supergirl‘s Melissa Benoist is making her Broadway debut tonight as Carole King in Beautiful: The Carole King Musical. Benoist is doing a limited engagement in the show through August 4.