In case you missed it, J.J Abrams and his son Henry are writing a “Spider-Man” miniseries, and “Nimona” creator Noelle Stevenson is releasing a new memoir. We also have an exclusive preview of next week’s “Spider-Man Annual,” starring Spider-Ham, as well as the one-shot “Spider-Man: Reptilian Rage.” 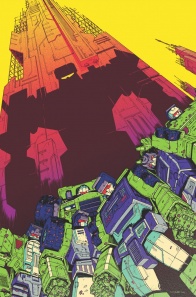 – IDW’s “new era of Transformers comic books” is getting its first spin-off series with “Transformers: Galaxies.” According to Newsarama, the new anthology series will kick off with a story starring the Constructicons, written by Vox Media co-founder Tyler Bleszinski and illustrated by Livio Ramondelli.

– The Beat shared a look at “Chastity,” a new series returning Chaos! Comics’s “iconic bad girl slayer” to the printed page (just in time for her 25th anniversary). The book will be published by Dynamite Entertainment, written by Leah Williams (“War of the Realms: Giant Man”), and illustrated by Daniel Maine (“Robyn Hood”).

– This year’s Etna Comics Festival (which took place in Sicily) included a new awards ceremony: the Coco Awards. Launched in memory of Sicilian cartoonist and illustrator Giuseppe Coco, this year’s ceremony included wins for artist Sara Pichelli (“Spider-Men”) and writer Lorenzo Calza (“She”), among others. You can read a full list of this year’s winners over at Down The Tubes.

– Newsarama shared an advance look at some intriguing Image Comics September solicitations, including a new series of OGNs from Elsa Charretier and Matt Fraction, the return of Kelly Sue DeConnick and Emma Rios’s “Pretty Deadly,” and news that Tina Horn and Michael Dowling’s “SFSX (Safe Sex)” has jumped to Image from Vertigo.

– Newsarama also reported that “Shuri” writer Dr. Nnedi Okorafor clarified that that book was not cancelled, but likely is not continuing. “I gave Marvel notice months ago that I couldn’t continue,” said Dr. Okorafor, “because I’m writing the pilots for the Amazon TV series Wild Seed and another TV series I can’t announce and a novel, etc.”

– Journal Pioneer cartoonist Wayne Wright is leaving the Summerside, P.E.I. newspaper after a 40 year run of producing daily cartoons. Wright said he was let go as a “cost cutting measure,” according to Yahoo! News.

– The Black Widow movie added Ray Winstone (The Departed) to its cast, says Variety. No word yet on who Winstone (or anyone outside of star Scarlett Johansson) will be playing; the film is currently in production in London.