In case you missed it, we have exclusive previews of tomorrow’s “Justice League Dark” #12, and Dark Horse’s “Fight Club 3” #6. 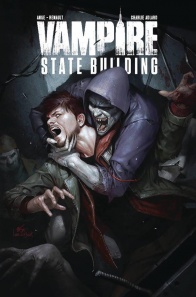 — There’s a new independent comics publisher in town: Ablaze, cofounded by comics industry veteran Rich Young, will debut its first title this September with the English language debut of “Vampire State Building,” a four-issue horror series drawn by Charlie Adlard and written by Ange and Patrick Renault. Ablaze plans to release 10 titles in 2019 and as many as 50 in 2020.

— Archie Andrews is getting the royal treatment in issue #302 of Archie Jumbo Comics Digest. “Name Fame” is a five-page story that details what happens when Archie learns about the birth of Archie Harrison Mountbatten-Windsor, the real-life British prince and son of the Duke and Duchess of Sussex (perhaps better known as Harry and Meghan), who shares both his first name and hair color. Deadline has an exclusive first look at the cover by artist Jeff Shultz and colorist Rosario “Tito” Peña.

— Deadline reports that filmmaker Taika Waititi (Thor: Ragnarok) has signed on to “crack” how to reboot Flash Gordon: he is rumored to be writing and directing the project as an animated feature film, though Fox/Disney has yet to confirm any concrete details about his involvement. Kingsman‘s Matthew Vaughn and Overlord director Julius Avery were previously set to reboot the property as a new live-action film.

— First Second revealed on its Twitter account the cover for “Cottons: The White Carrot” by Jim Pascoe and Heidi Arnhold. The second volume of the fantasy graphic novel series is out February 18, 2020.

— Marvel Entertainment is partnering with the Samuel French theatrical company on a series of one-act plays, dubbed the Marvel Spotlight Plays, featuring characters like Squirrel Girl, Thor and Loki, and Ms. Marvel. These plays are being developed to be licensed for performance schools and community theaters.

— Watari Kubota will draw a manga adaptation of Weathering With You, an anime film from Makoto Shinkai set to open in Japan on July 19. The manga will publish starting with the July 25 issue of Kodansha’s Afternoon magazine, with no word on an English translation yet. GKIDS has licensed the film in North America and plans to release it to a wide audience in early 2020.

— Finally, “Yu-Gi-Oh” creator Kazuki Takahashi will have four pieces of artwork displayed at Gallery 1988 in Los Angeles, part of the gallery’s “Yu-Gi-Oh” Tribute Art Show opening July 5. The show will also include works by artists such as Allison Bamcat, Tom Whalen, Dan Mumford, Anthony Petrie, Matthew Skiff, Dave Perillo, and Steve Dressler, and an interactive exhibit from Pretty in Plastic.