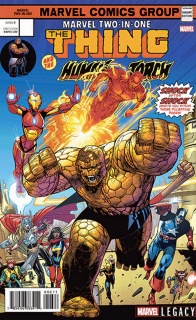 – Kicking off, the legacy of the Marvel Legacy announcements deepens as Marvel has scheduled a conference call with the members of the ComicsPro retailer advocacy group about the less than enthusiastic response to Friday’s “industry changing” Legacy teaser. Marvel revealed their ‘new 52″ line-up of series mostly resembling the comics they’re already publishing. You can check out our full coverage of the announcements here, and our response article here expressing similar concerns.

– Everyone needs some more Commander Will Riker in their lives and that’s just what we’re getting. Riker actor, and Star Trek: The Next Generation star Jonathan Frakes, has been announced to be directing multiple episodes of the upcoming Star Trek: Discovery set to air on CBS’ All Access App. Frakes previously directed episodes of TNG, as well as episodes of Deep Space Nine and Voyager (objectively the best of all the Star Trek shows, fight me in the comments I’m ready). Frakes also helmed The Next Generation films First Contact and Insurrection. Star Trek: Discovery premieres September 25 on CBS proper before transitioning to the app.

– Just when you thought DC’s live-action universe couldn’t get any darker, is it possible that they’re entertaining the idea of a Superman: Red Son movie? Rumors suggest that Warner Bros. has met with directors about the possibility of bringing the Mark Millar penned Elseworlds tale, in which baby Kal-El crashes in the Soviet Union rather than Smallville, to the big screen. Perhaps Putin is pulling the strings behind Warner Bros. as well?

– In more DCEU news, we now know for sure that Ben Affleck will don the cape and cowl again in Matt Reeves’ upcoming Batman solo movie. Affleck was originally set to direct the film originally desired for a 2018 release-date. Affleck stepped aside in January and it was heavily rumored the actor was trying to not return to the franchise following November’s Justice League. Reeves stated definitively though that Ben Affleck will be Batman which puts to bed those rumors, but still has us questioning what the future of the DCEU will look like.

– Would you like to see Blade in the MCU? Marvel Studios President Kevin Feige has teased that the vampire hunter could come to the MCU “Someday.” The film rights to Blade reverted back to Marvel Studios 6 years following New Line Cinema’s trilogy starring Wesley Snipes as the titular character. The first movie, Blade premiered in 1998 to critical acclaim, especially for being an R-rated superhero film. Blade also had a one-season series that aired on Spike TV in 2006, with the pilot written ironically by David S. Goyer of the Nolanverse and Man of Stell who also wrote all three films, and DC President and Chief Creative Officer Geoff Johns.

– The plot thickens as the confusion behind Sony and Marvel Studios’ Spider-Man sharing deal increases with a rumor that The Scorpion, played in the upcoming MCU Spider-Man: Homecoming by Michael Mando, will appear in Sony’s Silver Sable and Black Cat movie Silver and Black as a henchman of Mendel Stromm the Robot Master. It is unknown at this point if Mando will reprise his role in the Sony-verse. This follows a few weeks of confusion of the status of Tom Hardy’s Venom movie and whether or not Spider-Man will appear in it. Silver and Black is set for an October 2018 release with Gina Prince-Bythewood, who directed the pilot of Cloak and Dagger, helming the film.

– It has been confirmed that Molly Ringwald will reprise her role as Mary Andrews on the second season of Riverdale. Ringwald appeared in three episodes of the show’s freshman season, and with the reveals and crazy twists of the season finale, her presence may be needed more than ever. The reveal took place through Archie Comics official Twitter account featuring a photo of her along with Cole Sprouse’s Jughead and KJ Apa’s Archie. The CW show officially began filming last week and is set to premiere on Wednesday, October 11.

– New “Iron Maiden” comics will be heading to July’s issue of Heavy Metal Magazine. Based on the mobile game, Iron Maiden: Legacy of the Beast, the comic will center around the real life British heavy metal band’s mascot Eddie as he battles through the world of their albums. The comic is written by Llexi Leon and Ian Edginton with art from Kevin J. West. You can check out some preview pages here.

– In more Russia news, the superhero film Guardians about former Soviet superheroes recalled from a self-imposed exile to fight a mutant machine hybrid trying to achieve world domination, now has a US home release date. The film debuted in Russia with a small box-office haul and not great reviews, but will be distributed by Shout Factory in America September 5th. This is the beginning of the Russian imperial takeover folks.

– Finally, if you’re going to SDCC and are willing to shell out just $500 more dollars, you could reserve your ticket to have dinner with legendary “Thor” artist Walter Simonson. IDW is hosting the event for up to 25 people, so reserve your ticket here!