In case you missed it, Matt Groening’s new publication company was announced, with “Disenchantment: Untold Tales” as a launch title. We also have an exclusive preview of this month’s “Firefly” #8. 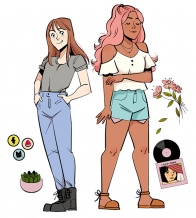 – Houghton Mifflin Harcourt acquired a middle grade graphic novel series, “Oh My Gods,” in a two-book deal. The series will be written by Stephanie Cook and Insha Fitzpatrick, with Juliana Moon providing the artwork. “Oh My Gods” will see Karen, an average girl join Mt. Olympus Junior High, only to discover that mythological beasts exist and everyone else in her class are gods and goddesses, leaving her to question who she is. The graphic novel and its sequel are set for release in the Fall of 2020 and 2021.

– “In,” the debut graphic novel by New Yorker cartoonist, Will McPhail, will be published by Spectre, after they won a three-publisher auction. “In” tells the story of an isolated illustrator, Nick, as he learns to interact with people, rather than just observe. Emma Herdman, the editorial director of Spectre, described the book as “a smart commentary on modern life and a joyful celebration of being human.” McPhail’s work at The New Yorker has seen him awarded with the Reuben Award’s Cartoonist of the Year award for the past two years running. The graphic novel is currently scheduled for release in the Spring of 2021. You can read the full synopsis for “In” here.

– Dark Horse announced Wendy and Richard Pini’s “ElfQuest” will return with a spin-off, titled “ElfQuest: Stargazer’s Quest,” which focuses on the new adventures of the character Skywise. This will be the first “ElfQuest” comic since the original series concluded last year, following a 40-year run at various companies including Dark horse. Artist and “ElfQuest” veteran Sonny Strait will return for the new comic, which Wendy Pini will script and draw layouts for. “ElfQuest: Stargazer’s Hunt” #1 goes on sale November 13, 2019.

– A teaser for a new project from the “Akira” creator, Katsuhiro Otomo, was released. The teaser, which shows a space suit-wearing character with a skateboard, was released as a banner outside of the Los Angeles Convention Center ahead of Anime Expo 2019. Otomo will be a Guest of Honor at the Anime Expo, with details on this new project likely to be revealed then. Anime Expo starts today and runs until July 7. In the meantime, you can check out the teaser here.

– In an interview with Middle East Eye, Syrian comic creator Hamid Sulaiman (“Freedom Hospital”) detailed his two current projects: one is about the Hama Massacre in 1982, and the other is about tattoos. For those who are unaware, the Hama Massacre saw an uprising against then-Syrian President Hafez al-Assad being brutually suppressed, with thousands killed. In the interview, Sulaiman describes how his work on “Freedom Hospital” led him to researching the modern history of Syria, with the Massacre being of particular interest to him, because of his personal connections to it.

He is currently in the process of researching the topic further by interviewing historians and academics, with the resulting artwork currently pencilled in for a show marking the 40th anniversary of the massacre at the Musee National de la Resistance in Luxembourg in February 2022. The second project is rooted in the tattoo community that Sulaiman has become a part of in Berlin, with his aim for the project being to chronicle his journey into the world of tattoos and their history and meanings. There is no release schedule for the tattoo project at this time.

– DC Comics announced plans for a pop-up exhibit at San Diego Comic Con called The Batman Experience Powered by AT&T. The exhibit will feature props from the various Batman TV shows and films, such as Michael Keaton’s Batman costume, rare original comic book artwork, a gaming lounge with multiple Batman video and arcade games, and a chance to fight some of the Batman’s most famous foes in an “interactive punching bag experience.” Finally, there will be a VR experience in the pop-up, called Dark Knight Dive, which will be coupled with a skydive booth, enabling guests to fly over Gotham City in pursuit of Scarecrow. The pop-up will be found off-site at the Comic-Con Museum in Balboa Park. There will be a preview night on Wednesday 17 July before it is made open to the public (even those without SDCC badges) the next day. The pop-up will last for the duration of SDCC, which starts on July 18 and ends July 21.

– Plans for a new film adaptation of the Italian comic, “Diabolik” by Angela and Luciana Guissani were unveiled. Rai Cinema will be producing the film, with Miriam Leoone and Valerio Mastandrea co-starring as as Eva Kant and Inspector Ginko, respectively, with Serena Rossi in a yet-to-be announced role. Antonio and Marco Manetti will both be producing the film and are aiming for the cast to be “100% Italian.” For those who are unfamiliar with the comic book series, it told the story of master thief, Diabolik, and his partner, Eva Kant as they try to evade the police, led by Inspector Ginko. This film will not be the first adaptation of the series, with Danger: Diabolik having been released in 1968. The new adaptation, Diabolik, will be released in 2020, although plans for a subtitled/dubbed version of the film have not been announced at this time.

Welcome back to The Rundown, our daily breakdown on comic news stories we missed from the previous day. Have a link to share? Email our team at rundown@multiversitycomics.com.— Mainframe Comic Con is coming to a computer screen near you. The fully online con will broadcast live from Chicago Comics on April 25 and 26 and […]