We also ran previews for two of next week’s Marvel Comics, the next “Secret Warps” annual, and the final issue of “Deadpool” for the time being. 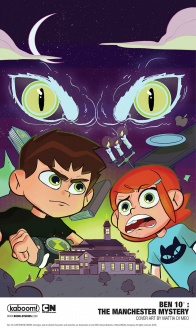 – Kicking off, BOOM! Studios announced yesterday a new Ben 10 middle grade graphic novel from writer CB Lee and artist Francesca Perrone. The new graphic novel, “Ben 10: The Manchester Mystery,” will follow Ben as he “attempts to solve the mystery of a famous haunted house,” and win a spot on his favorite supernatural television show. The book will hit shelves in March 2020.

– Announced earlier this year, the David Bowie graphic novel “Bowie: Stardust, Rayguns, & Moonage Daydreams” from Insight Editions now has some beautiful preview pages. The book heralds from artists Mike Allred, Laura Allred, and writer Steve Horton, and will trace Bowie’s career when it releases in January 2020. You can find some lettered and fully colored pages here.

– In television news, Amazon Studios has landed the rights to Brian K. Vaughn and Cliff Chiang’s Image Comics series “Paper Girls.” The show hails from production companies Legendary Television (Legendary Entertainment’s television division, who Vaughn has a multi-year deal with) and Plan (12 Years a Slave). Stephany Folsom (Toy Story 4) is set to pen the adaptation and executive produce alongside Vaughn. No release date has been announced.

– In more television news, Warner Brothers Animation and Elizabeth Banks’s Brownstone Productions are teaming for a new Flinstones animated series. The Flinstones originally ran six seasons from 1960-66 on ABC, and have had numerous attempts at reviving the show, the last in 2011. Most recently in 2016, Mark Russell and Steve Pugh collaborated on an acclaimed comic series starring the family that ran for 12 issues at DC. No network is currently attached to the show.

– The DC/Wonder Comics title “Naomi,” written by Brian Michael Bendis and David Walker with art by Jamal Campbell, wrapped its first six-issue “season” on Wednesday. In that issue, main character Naomi’s full name was given finally as “Naomi McDuffie.” On Twitter both Walker and Bendis revealed the last name was meant to honor late creator Dwayne McDuffie, with Walker saying it was a way to honor his mentor and friend, and that he reached out to McDuffie’s widow, Charlotte Fullerton for her blessing. McDuffie was one of the founders of Milestone Media in the 1990s, and writer of books like “Justice League of America” and “Fantastic Four.” He died suddenly in 2011 at the age of 49.

– The first trailer for the 3D animated “Lupin III” film was released yesterday. The film is the first 3D adaptation of the anime/manga. The original volume from creator Monkey Punch ran 14 volumes in the late 1960s, and has spawned numerous anime series, animated and live-action films, and video games. The movie will hit theaters in Japan on December 6, 2019.

– Finally, the winners of the World Illustration Awards 2019 were announced yesteday, with artist Anna Mill being the overall winner in the Books category for her graphic novel “Square Eyes” which “envisages a near future city in augmented reality.” Congratulations to all the winners!

Welcome back to The Rundown, our daily breakdown on comic news stories we missed from the previous day. Have a link to share? Email our team at rundown@multiversitycomics.com.In case you missed it, DC announced the “Catwoman 80th Anniversary 100-Page Super Spectacular,” Marvel announced a couple new “Empyre” tie-ins, and Dark Horse revealed three new titles, […]

Welcome back to The Rundown, our daily breakdown on comic news stories we missed from the previous day. Have a link to share? Email our team at rundown@multiversitycomics.com.– Marvel has revealed that the X-Men will tie into the Avengers and Fantastic Four-focused crossover event ‘Empyre.’ “X-Men” #10, written by Jonathan Hickman with art by Leinil […]

Welcome back to The Rundown, our daily breakdown on comic news stories we missed from the previous day. Have a link to share? Email our team at rundown@multiversitycomics.com.In case you missed it, AfterShock Comics announced “Dead Day,” Scholastic Graphix announced a comic book adaptation of Animorphs, Marvel announced a slew of new books including “Black […]