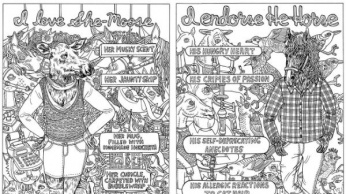 Art by Lisa Hanawalt
– Independent publisher Drawn & Quarterly announced a collection of Lisa Hanawalt’s early work to be released in the Fall of 2020. “I Want You” will collect Hanawalt’s mini-comics from the early 2000s, many of which served as the inspiration for the popular animated shows BoJack Horseman and Tuca and Bertie. Drawn & Quarterly also announced much more, including a new graphic novel from Adrian Tomine called “The Loneliness of the Long-Distance Cartoonist.”

– MidBoss has partnered with IDW publishing to announce a comic book series focused on expanding the universe of the video game 2064: Read Only Memories. The series will be written by Sina Grace (“Iceman”) and illustrated by Stefano Simeone (“Wyrd”), and is set to begin December 2019.

– IDW Publishing celebrated their 20th anniversary at San Diego Comic-Con with a panel chock full of announcements and new releases, including:

– Pure Imagination Studios have teamed with POW! Entertainment for an animated project about the late Stan Lee. The Amazing Stan re-envisions the comic-creator as a modern-day young person and examines how the world would look through his eyes.

– Dark Horse Comics announced a new one-shot comic for “The Umbrella Academy,” as well as some new merchandise. The comic, called “Hazel and Cha Cha Save Christmas: Tales from the Umbrella Academy,” follows the two assassins as they track down a rogue time agent, and cross paths with a plot to discredit Christmas. The 32-page one-shot is set for release on November 20, 2019. The merchandise announced includes new pint glasses, mugs, and clothing.

– At the 20th anniversary panel for Batman Beyond, the show’s creators and stars gathered to reminisce about the show and announced a new, fully-remastered Blu-ray box set of the series. The box set will include all of the original 52 episodes, the Return of the Joker animated film, and plenty of bonus features. The collection will be available for purchase digitally on October 15th and on Blu-Ray October 29th.

– Finally, unfortunately, production has been shut down on the set of DC Universe’s Titans after a crew member was killed accidentally at a special effects facility. Warren Appleby, the show’s special effects coordinator, was killed “after an accident which occurred at a special effects facility during the preparation and testing for an upcoming shoot,” according to the show’s executive producers. Appleby had worked in the industry since the mid-1990s on projects including The Shape of Water, Crash, and Transporter: The Series.