In case you missed it, we have an exclusive preview of tomorrow’s “Deathstroke” #46, and have new interviews with “Triage” creator Phillip Sevy and “Doctor Mirage” writer Magdalene Visaggio. 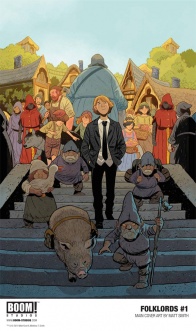 – BOOM! Studios announced “Folklords,” a new five-issue mini from writer Matt Kindt and artist Matt Smith. The fantasy series revolves around Ansel, a boy haunted by visions of a world with suits and modern technology. Despite it being forbidden and punishable by death, he decides to embark on a quest to find the Folklords, who are the only ones who can solve this mystery. “What will Ansel risk to find out about the world he has never truly belonged in?” You can find out when the series begins in November.

– Sterling Publishing unveiled “Song of the Court,” an all-ages graphic novel from cartoonist and animator Katy Farina (She-Ra and the Princesses of Power) due out April 21, 2020. The book tells the story of Arietta, a cat planning to sell her family’s treasured violin, when Princess Cassia (a rabbit) asks her to play the violin at her upcoming birthday party – an invitation Arietta accepts, despite never having learned to play it. Farina describes the book as one for young readers struggling with anxiety and imposter syndrome. You can see more artwork at The Hollywood Reporter‘s announcement.

– At DC, Justice League titles editor Marie Javins has been promoted to Executive Editor of New Publishing Initiatives, a new division at the publisher that is described as “a big deal to Warner Bros. and AT&T,” with a renewed focus on international publishing. Jamie S. Rich, who edits the Batman titles, will succeed Javins on overseeing the Justice League comics.

– The Hollywood Reporter confirmed actor and director Andy Serkis (Breathe, Mowgli) has signed on to helm the sequel to last year’s Venom. He succeeds Ruben Fleischer, who directed Tom Hardy’s first outing as Eddie Brock and his symbiote alter-ego. It is unknown when the sequel will be released.

– The Reporter also broke the news that Gemma Chan is in talks to join Marvel Studios’ Eternals. (Chan previously portrayed Minn-Erva in this year’s Captain Marvel.) Collider also claims Barry Keoghan (Chernobyl, FX’s Y) is in talks to join the movie, which is due out November 6, 2020.

– Deadline reports actor Nico Tortorella (Younger) has been cast in a leading role in the forthcoming, still untitled Walking Dead spin-off. The series, the third from AMC based on Robert Kirkman and Charlie Adlard’s comic, will premiere early next year and follow the first generation coming of age after the apocalypse. Tortorella will reportedly play Felix, an honorable man of his word who’s willing to fight for others’ safety and acceptance.

– And finally, editorial cartoon site The Nib will resume operations on August 12, having spent this week readjusting after First Look Media stopped funding them at the end of July. You can support the newly independent Nib by subscribing here.