In case you missed it, we interviewed cartoonist and sculptor Shing Yin Khor about their graphic novel “The American Dream?: A Journey on Route 66 Discovering Dinosaur Statues, Muffler Men, and the Perfect Breakfast Burrito,” which is out this week from Zest Books. 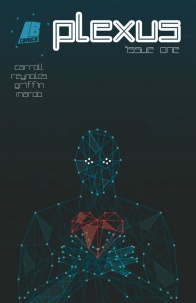 – Kicking off, Limit Break Comics is set to launch the first issue of the ongoing sci-fi anthology book “Plexus” this weekend at Dublin Comic Con. The first issue is set to feature three stories written by Paul Carroll and featuring art from Rebecca Reynolds, Colm Griffin and Steve Mardo. The ongoing mission of “Plexus” is to tell “human interest stories within the context of different science fiction universes, addressing themes of anxiety, family and grief.”

– In more anthology news, some of the team behind the Eisner-nominated anthology “Puerto Rico Strong” are reteaming for another book from their newly founded label King Skull Comics called “Strange Encounters.” The team of Marco Lopez, Derek Ruiz, and Neil Schwartz’s new book supernatural infused anthology features original stories and novel and novella adaptations from “some of the most talented female authors in the supernatural prose genre today.” The project is live now on Kickstarter.

– The Iron Circus Comics anthology “You Died: An Anthology Afterlife,” announced at the beginning of this year, will feature a story from writer/artist Raina Telgemeier (“Guts,” “Smile”). The 240-page anthology project is also live on Kickstarter and features a wide berth of other creators, which you can find here. The project is scheduled for release September 2020.

– “Unstoppable Wasp” recently concluded its second volume run in July over at Marvel, but is set to live on in a new young adult novel from Marvel Press next year. Sam Maggs (“Marvel Action: Captain Marvel”) will be telling more stories of Nadia and the scientists at G.I.R.L. in this new tale, in which Nadia is “gifted a virtual assistant, powered by the most cutting-edge technology the world has to offer, that allows her the opportunity to ‘do less, experience more.'” Nadia was created by Mark Waid and Alan Davis, and Jeremey Whitley wrote both volumes of “Unstoppable Wasp” with artists Elsa Charretier and Gurihiru.

– The first trailer for DC and Warner Bros. Animation’s next film Wonder Woman: Bloodlines was released yesterday. The movie will see Wonder Woman take on a plethora of her enemies including Silver Swan, Giganta, Cheetah, Veronica Cale, and more as they seek to invade Themyscira. The film sees Rosario Dawson returning to voice Diana, and includes Jeffrey Donovan, Marie Avgeropoulos, Constance Zimmer, and more. No release date has yet been announced.

– The September issue of Akita Shoten’s “Monthly Shōnen Champion” magazine will launch a remake of Osamu Tezuka’s “Rainbow Parakeet” manga from artist Chika Nakatani. The series will be titled “Gekidan Nijū-Mensō VS Nanairo Inko (The Troupe of Twenty Faces vs. Rainbow Parakeet),” and launch on September 6th. “Rainbow Parakeet” ran in the magazine from 1981-1983.

– The UK Center for Clinical and Translational Science (CCTS) has launched its first ever Science Communication Challenge, which invites any “UK student, trainee, or faculty member with a publication in the last three years in any clinical or translational field” to make a pitch that explains their research in comic book form. The winner of the award will work with an artist to bring their concept to life.

– Finally, the comic “Non Sequitur” is slowly returning to newspapers across the country after a February comic depicted a a vulgar note to Donald Trump. Miller has continued to issue apologies after the event, which saw many newspapers across America drop the comic and forced Miller and his wife to move across the country after a loss of income. You can find more of an interview with Miller here from a recent event in Spokane, Washington.

Welcome back to The Rundown, our daily breakdown on comic news stories we missed from the previous day. Have a link to share? Email our team at rundown@multiversitycomics.com.In case you missed it, we had the sad news that Nicola “Nick” Cuti, the co-creator of E-Man, died at age 75. We also had an exclusive preview […]