In case you missed it, Donny Cates and Geoff Shaw are relaunching “Guardians of the Galaxy” in January; classic comic strip “Alley Oop” has gone on hiatus; and we have an exclusive preview of tomorrow’s “Ghostbusters: Crossing Over” #6. 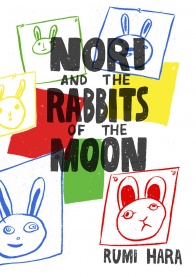 – Drawn & Quarterly have acquired publication rights to illustrator Rumi Hara’s “Nori” minicomics. “Nori is the nickname for Noriko, a three-year-old girl who lives with her parents and grandmother in the suburbs of Osaka during the 1980s. While both parents work full-time, her grandmother is Nori’s caregiver and friend, exploring the fantastical nature of the world around them.” The second part of the planned six-part series, “Nori and the Rabbits of the Moon,” earned Hari a nomination at this year’s Ignatz Awards for Best Series, and for Promising New Talent. D+Q will publish the whole “Nori” series as a graphic novel in Spring 2020.

– Marvel shared advanced press copies of this week’s “Asgardians of the Galaxy” #1, which revealed a fan favorite version of Loki is making their return to the Marvel Universe. Head on over to Newsarama to find out which one.

– Marvel also revealed Nick Bradshaw will illustrate the Apocalypse back-up in October’s “X-Men Black: Mojo,” and presumably the other installments of the story running in the other “X-Men Black” one-shots that month.

– In his newsletter (via Newsarama) “Daredevil” writer Charles Soule has teased “a big announcement [that] should hit soon” for the title. This comes in the wake of Marvel’s November solicits, which promised the oversized “Daredevil” #612 will “have you talking for months!!”

– Forbes have interviewed Sarah Steenland, aka the Cruising Cartoonist. They spoke about how she went from an unhappy interior designer, to a top artist for brands like T Mobile and Johnson & Johnson, and how that enables her to support a family of four traveling around the world just from cartooning.

– At the Crunchyroll Expo, the website revealed they had acquired the rights to three Square Enix manga launching this month: “Talentless Nana,” “One Room of Happiness,” and “YanOta: The Delinquent and the Otaku.” They also announced they will stream JoJo’s Bizarre Adventure: Golden Wind and the second season of Black Clover this Fall.

– Finally, The New York Review of Books have a retrospective on mangaka Tadao Tsuge’s work from the late ’60s and ’70s, which often depicted the grim reality of life in post-war Japan.