In case you missed it, DC will begin to draw ‘Year of the Villain’ to a close with “Year of the Villain: Hell Arisen.” We also interviewed the creators of “Death Trap,” Matt Miner and Christopher Peterson, and “Gotham City Monsters” creators Steve Orlando and Amancay Nahuelpan. 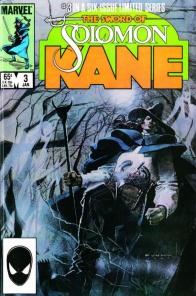 — Marvel announced that more characters from Conan creator Robert E. Howard will be making their way back to the comics publisher. In a press release, Marvel teased that fans can keep an eye out for Dark Agnes, Solomon Kane, and a few more characters in future books. Full details will be revealed at a later date.

— Peter David and Greg Land will release the next installment in the ‘Alien Costume Saga’ titled “Symbiote Spider-Man: Alien Reality” #1 this December. The oversized, 40-page issue finds Peter Parker in a battle against the Hobgoblin, where the supervillain has acquired himself some new powers.

— In today’s weird, sort of dark news, a “Tintin” comic strip that “features drops of creator Herge’s blood on it” will be up for sale at a Paris auction on September 18, 2019. It’s expected to sell for around £350,000, though a previous original Tintin drawing sold for £1.3m in 2016. However, that still doesn’t answer the question: why are there drops of blood on this strip? Were they intended? Are they prominent? Is it weird to highlight blood as a “feature” in an auction when the creator himself died of a rare blood cancer? So many questions.

— The Alberta government released two graphic novels focused on suicide prevention for Indigenous and Métis youth. The first is “Tomorrow’s Hope” and the second is “Strength of the Sash,” and the hope is that they will encourage honest conversations about suicide and mental health. According to Global News, Alberta has one of the highest rates of provincial suicide rates in Canada, with the rate of Indigenous youth being five to six times higher than the general population.

— The “Dragon Ball” franchise is releasing its latest installment in the saga next year with the video game Dragon Ball Z: Kakarot. It was revealed on Twitter that the game will release on January 16, 2020 for PlayStation 4 and Xbox One, with pre-orders beginning today, September 12. It’s priced at 7600 yen plus tax, or about $70.

— Build-A-Bear Workshop has added a new Wolverine-themed bear to its lineup. The bear is an online exclusive, retailing at $35. He’s pretty cute, despite his attempt at a scowl. But, as Newsarama points, out, how can you argue with a kid’s stuffed animal with six knives on his hands?

— Finally, the movie adaptation of Valiant’s superhero comic “Harbinger” is now being produced by Paramount after originally landing with Sony. Also making the move to Paramount will be filmmaker Justin Tipping, producer Neal Moritz, and the script written by Tipping and Joshua Beirne-Golden from Eric Heisserer’s draft. According to The Hollywood Reporter, Harbinger will undergo a short development process before moving forward with the creative team.