In case you missed it, Valiant announced “The Visitor” by Paul Levitz and M.J. Kim, and we interviewed Alex Segura and Monica Gallagher about their noir superhero series “Black Ghost.” 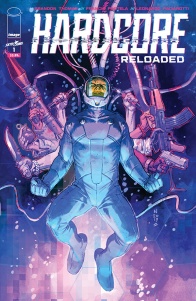 – Image Comics announced the return of Robert Kirkman and Marc Silvestri’s “Hardcore,” called “Hardcore Reloaded.” The sequel series will be written by Brandon Thomas, with artwork by Francis Portela, colors by Leonardo Paciarotti, and letters by Thomas Mauer. Nic Klein will provide the cover artwork. “Hardcore Reloaded” will follow on from the events of the previous chapter, with the Hardcore technology now widely available and Agent Drake tasked with containing it. “Hardcore Reloaded” #1 is scheduled for release on December 18.

– An original graphic novel by actor Aaron Douglas (Battlestar Galactica) was announced alongside the notice that he will be making an appearance at Baltimore Comic Con. This original graphic novel will be published by AfterShock Comics, who have previously published his short stories as part of their “Shock” anthologies. Details about the graphic novel were left to a minimum, with only a 2020 release date being confirmed. Baltimore Comic Con will take place on October 18-20.

– Dark Horse Comics revealed “Crone” #2 by writer Dennis Culver and artist Justin Greenwood will feature a back-up story called ‘Romero Muerte’ by Culver, artist Ramon Villalobos and letterer Christy Sawyer. The back-up story will feature a lone figure who avenges the victims of all who celebrate “Hell and devastation” along the former U.S/Mexico border. This back-up story will only be included in the print edition of the issue, which is scheduled for release in December. In the meantime, you can check out the cover for “Crone” #2, as well as preview pages from ‘Romero Muerte,’ here.

– The first full poster for Birds of Prey was released with the tagline “Mind over Mayhem.” The poster features Margot Robbie’s Harley Quinn, Mary Elizabeth Winstead’s Huntress, Jurnee Smollett-Bell’s Black Canary and Ewan McGregor’s Black Mask amongst others. Birds of Prey will see Harley unite with Black Canary, Huntress and Renee Montoya to save a young girl from a crime lord. Birds of Prey and the Fantabulous Emancipation of One Harley Quinn will be released in cinemas on February 7. You can check out the poster for yourself here.

– Kevin Feige, producer and President of Marvel Studios, joined the USC School of Cinematic Arts (SCA) Board of Councilors. The announcement was made by Elizabeth M. Daley, the Dean of the School, who described Feige as “leader and unparalleled creative force in film and television.” As a member of the Board of Councilors, Feige will aid with the planning, development and fundraising efforts for the School. Some of the notable icons who are already on the Board are Kathleen Kennedy, George Lucas and Steven Spielberg.

– NBCUniversal announced that the drama series, Brave New World, which Grant Morrison (“The Green Lantern”) has been serving as an executive producer of, will be premiering on their streaming service, Peacock, next year. The TV series is a live-action adaptation of Aldous Huxley’s novel of the same name, which is set in a dystopian future where individuals are genetically bred and pharmaceutically anesthetized in order to be ruled by those at the top of society. It will star Alden Ehrenreich (Solo: A Star Wars Story) and Demi Moore (G.I. Jane). Peacock will begin rolling out in April 2020.