In case you missed it, Carlos Ezquerra, the Spanish comics artist who co-created Judge Dredd, has passed away at the age of 70; The Legend of Korra is set to continue with another trilogy of graphic novels entitled “Ruins of the Empire,” launching in May of next year; and BOOM! Studios unveiled R.L. Stine’s “Just Beyond.” We also spoke with Kyle Starks about his upcoming run on Dynamite’s “Mars Attacks.” 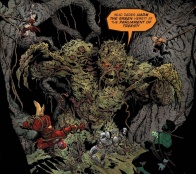 – Greg Capullo (“Batman”) has tweeted a confirmation that he and writer Brian Azzarello (“Batman: Damned,” “Dark Knight III: The Master Race”) will be collaborating on an original Halloween themed Swamp Thing story for DC’s Walmart exclusive “Swamp Thing Halloween Horror Special.” Capullo’s tweet (reported via Newsarama) also features part of the cover art and reveals that Batman, The Reaper, Aquaman, Zatanna, Blue Devil and the Scarecrow will also be featured in the 100-page special.

– According to Deadline.com, Netflix has secured international rights to the upcoming Warner Bros. studio live-action drama series Titans. In the United States, the show will launch on DC Universe (Warner Bros’ newly minted streaming platform) on October 12th, making it the platform’s first original series. Titans is the second DC themed series from Warner Bros. to secure a co-licensing agreement with Netflix (with Black Lightning being the first).

– According to The Hollywood Reporter, PBS Kids will be creating a new show entitled Xavier Riddle and the Secret Museum based on the Ordinary People Change the World book series by Brad Meltzer (“Identity Crisis,” “Justice League of America”) and illustrator Chris Eliopoulos (“Franklin Richards: Son of a Genius”). The series will be produced by the Brown Bag Films animation studio, and will make a Fall 2019 debut on PBS stations, the PBS Kids channel and related PBS Kids digital platforms.

– According to Gary Whitta’s Twitter feed, Image Comics’ “OLIVER” now has a final logo and an official release date of January 23. The steampunk reinterpretation of Charles Dickens’s Oliver Twist will be written by Gary Whitta with illustrations by Darick Robertson.

– Koyama Press (via comicsreporter.com) has announced their official Spring 2019 line up. Included in the line-up is Emily Carroll’s gothic themed “When I Arrived at the Castle,” Chris Kuzma’s “Lunch Quest,” Aaron Leighton’s “A Children’s Book of Demons,” and Ben Sears’s “House of the Black Spot.”

– According to The Beat, Greg Rucka (“52,” “Wonder Woman”) and Michael Lark (“Captain America,” “Gotham Central”) are selling “Lazarus” t-shirts (featuring the series’ protagonist Forever Carlyle) to raise funding for RAINN, an organization devoted to fighting sexual violence. The shirts feature Lark’s artwork and will be available for order through Bonfire.

– Academy Award-nominated actress Ann-Margret (Bye Bye Birdie) will be joining the cast of Syfy’s Happy! series. Deadline.com reports that she will portray “Bebe Debarge, a former siren of stage and screen.” Happy! (which was recently renewed for a second season) is based on Grant Morrison and Darick Robertson’s acclaimed Image Comics series of the same name.

– And following up on the success of Happy!, Universal Cable Productions will reportedly tackle another image Comics property – “Ice Cream Man.” UCP is currently adapting “Ice Cream Man” (created by writer W. Maxwell Prince and artist Martin Morazzo) as a live-action television anthology. Deadline.com describes the forthcoming series as a pastiche of classic television suspense dramas like The Twilight Zone, The Night Gallery and Tales From the Crypt.