In case you missed them over the weekend, you can read our special New York Comic Con editions of The Rundown from Saturday and Sunday here and here. Highlights from the weekend include this year’s Harvey Award winners; Jamie McKelvie’s new project “The Killing Horizon“; and relaunches galore at Marvel, from Don Cates taking over “Thor” from Jason Aaron, to Benjamin Percy, Adam Kubert and Viktor Bogdanovic relaunching “Wolverine,” and new “Star Wars” ongoings. 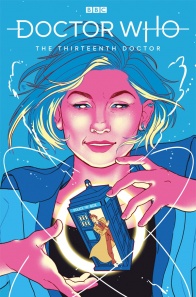 – Titan Comics announced “Doctor Who: The Thirteenth Doctor” will kick off “Season Two” with the character teaming up with her Tenth counterpart — and Dr. Martha Jones — against the Weeping Angels and the Autons in 1960s London. “Season Two,” written by Jody Houser with art by Roberta Ingranata and colorist Enrica Angiolini, will begin in January 2020, shortly before Jodie Whittaker’s second series is set to start. In the meantime, check out the covers for the issue here.

– TNT released an animated promotional video for Snowpiercer, narrated by lead actor Daveed Diggs. The video explains how the post-apocalyptic world of the series came to be. Snowpiercer premieres on TNT next year, and will be released on Netflix in the rest of the world.

– Netflix released the trailer for She-Ra and the Princesses of Power season 4, all 13 episodes of which will be released on November 5. You can also get a closer look at Catra and Glimmer’s redesigned appearances in two new posters here.

– Lucasfilm teased ‘Project Luminous,’ a 2020 publishing initiative at Del Rey, Marvel and IDW that Cavan Scott and Charles Soule will be participating in. It’s unknown what the project will be about, beyond a tagline that reads, “The Force is what gives a Jedi his power. It’s an energy field created by all living things. Until…”

– AMC’s untitled third Walking Dead series will be released on Amazon Prime Video in Africa, the Asia-Pacific, Middle East, and Europe (except for Spain and Portugal, where it will air on AMC Networks International). The ten-part series begins releasing next year.

– Joker opened in North America with $93.5 million, the biggest opening weekend for a movie released in October to date, beating the record set by Venom — $80.2 million — last year. The movie, which cost $55–70 million to produce, is already a profitable hit for Warner Bros., having grossed $234 million worldwide. You can listen to our podcasters’ brief reaction to the film here.

– And finally, it was revealed at NYCC’s Women of Marvel panel that Javier Pina will illustrate Kelly Thompson’s upcoming “Captain Marvel” spin-off, “Star.”