In case you missed it yesterday, we ran two exclusive previews for comics out this week. The first, “Wonder Woman” #80 from DC Comics, and the second a preview of the graphic novel “The Twilight Man: Rod Serling and the Birth of Television” by Koren Shadmi.

You can also still find all our NYCC 2019 coverage from last week here. 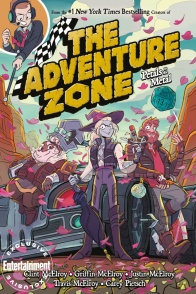 – Kicking off, Entertainment Weekly has the first preview of the third installment of “The Adventure Zone” graphic novel series, “The Adventure Zone: Petals to the Metal.” Written by the McElroys and illustrated by Cary Pietsch, the D&D podcast-turned-hilarious graphic novel hits shelves from First Second Books on July 14, 2020. You can find the pages here, and go to Newsarama for more details from their panel at NYCC.

– Speaking of previews, writer Tom Taylor teased on Twitter a new creator-owned project with artist Jon Sommariva for 2020. Taylor revealed a few panels from the unannounced book on his Twitter page over the weekend. No other details have yet to be announced.

– Marvel Entertainment Chief Creative Office Joe Quesada will soon have an exhibit running in New York City of his work from the Society of Illustrators. Running from October 15 to November 23, the exhibit, “Highlights from The Marvel Art of Joe Quesada: Selected by Joe Quesada,” will show off some of Quesada’s Marvel work from his almost three-decade career. The exhibit will be located at 128 East 63rd Street in New York City.

– Applications are now open for the 2020 Will Eisner Graphic Novel Grants for Libraries, which aims to initiate or provide support to libraries that would like to implement or expand their existing graphic novel services and programs. The grant is sponsored by the American Library Association (ALA) and the Will and Ann Eisner Family Foundation, and will take applications until February 9, 2020.

– In more library and comic’s news, The Rochester Institute of Technology is breaking ground on its new facility, the Joe Kubert Library of Comics & Popular Art. The building will celebrate the life of artist Joe Kubert and serve as a “world-class library, maker space, and exhibition space, with a foundational collection of Kubert’s art at its core,” and also as the centerpiece for RIT’s Comic Studies Initiative.

– James Wan and his production company Atomic Monster is working with Italian comics publisher Sergio Bonelli Editore to co-produce an English-language TV series based on cult horror comic “Dylan Dog.” The new 10-episode series is based on Tiziano Sclavi’s series, and will feature “the exploits of its titular British paranormal investigator, who with his sidekick Grouch, a Marx impersonator, takes on cases that usually involve monsters, ghosts, vampires, werewolves and zombies.”

– Joker has now earned the most money of any other film that has debuted in October, but it continues to spark controversy after controversy. It was reported that the film is now facing criticism for using convicted pedophile Gary Glitter’s 1972 hit “Rock and Roll Part 2” in a lengthy scene in the film. The artist, currently serving a 16-year sentence in prison, is expected to receive a large lump sum and royalties thanks to the inclusion of his work in the film.

– Finally, Nicaraguan political cartoonist Pedro X. Molina and his family has successfully found sanctuary in the United States after facing threat in their country of origin. Molina worked at Nicaraguan paper Confidencial, whose office were raided by police in December 2018. You can read more about their story here.