In case you missed it, we have an exclusive preview of next month’s “Buffy the Vampire Slayer” #9. 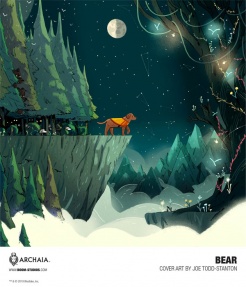 — BOOM! Studios, have announced their latest original graphic novel, “Bear” by Ben Queen and Joe Todd-Stanton. The book follows the titular guide dog, Bear, who goes on an adventure to find a forest spirit after he inexplicably loses his sight. Joe Todd-Stanton is known for his work as a children’s book illustrator, with a bibliography including A Mouse Called Julian and The Secret of Black Rock, while Ben Queen was the writer behind Cars 2 and Cars 3. “‘Bear’ is a wonder-filled adventure about the deep bond of friendship. Plus talking animals!” said Queen, “I guarantee you will not see the world the same way after you’ve seen it through the eyes of Bear.” The OGN goes on sale in August of 2020.

— Chris Butcher, founder of the Toronto Comics Art Festival and manager at The Beguiling, is receiving the insignia of Chevalier de l’Ordre des Arts et des Lettres for his contributions to the promotion of art and literature in France. The award for “significant contributions to the enrichment of French cultural heritage” will be presented by French Minister of Culture, Franck Riester. “I am thrilled to support the decoration of Mr. Christopher Butcher in l’Ordre des Arts et des Lettres,” Riester said, “This initiative is perfectly in line with the objective of the French Ministry of Culture to reward the talents who succeed in boosting an artistic sector by making it accessible to a wide audience. I am delighted to award him this high French distinction.” The award ceremony is scheduled for today.

— IDW Publishing had a massive NYCC slate last week, including the announcements of “Tiananmen 1989” and ”Bermuda.” However a few of their smaller titles are just starting to make their way into the news, such as Usagi Yojimbo’s return in “Usagi Yojimbo Color Classics” in January 2020, season 10 of the “My Little Pony” comic book, and David M. Booher and Drew Zucker’s return to “Canto” with the one-shot “Canto and the Clockwork Fairies,” followed by a five-issue miniseries next summer. In story news, IDW announced that the next three story arcs of “Transformers: Galaxies” will follow Cliffjumper, Arcee, and Ultra Magnus in that order. Finally, Ángel Hernández will be joining writers Kirsten Beyer and Mike Johnson as the artist on “Star Trek: Picard,” which will tie into the upcoming TV series.

— A new horror comics publisher called Machina Corpse announced their first comic, “First Offerings.” Co-founders Stephen Emond and Chandra Free will also be writing the publisher’s first release: each creator has a short story in the book, with Stephen Emond writing ‘1983,’ a prequel to an upcoming graphic novel that follows a family being stalked by a demon, while Free will tell the story of Seline, a vampire grappling with her home, her friends and her undead hunger in ‘Lonely, BK.’ “First Offerings” is set to release before the year’s end.

— Yahya Abdul-Mateen II has joined the main cast of Lana Wachowski’s Matrix 4 alongside returning stars Carrie Anne-Moss and Keanu Reeves. Abdul-Mateen II is best known for his role as Black Manta in Aquaman, but has been recently gaining acclaim for his roles in Us, Black Mirror, and the upcoming Watchmen TV series. His role remains unknown despite speculation that he may be playing a young Morpheus. The film is expected to begin production in early 2020 with a script by Aleksandar Hemon and David Mitchell.

— Sony Pictures are reportedly considering switching their live-action Masters of the Universe film from a theatrical release to a streaming debut. The film has been in various stages of production since 2007 and is currently scheduled for a March 2021 release, but studio chairman Tom Rothman is apparently considering selling the project to Netflix in exchange for a risk free payment, rather than taking their chances on a precarious release. With She-Ra and the Princesses of Power already making waves on Netflix and Kevin Smith’s He-Man series in the works, Masters of the Universe would likely fit right in.