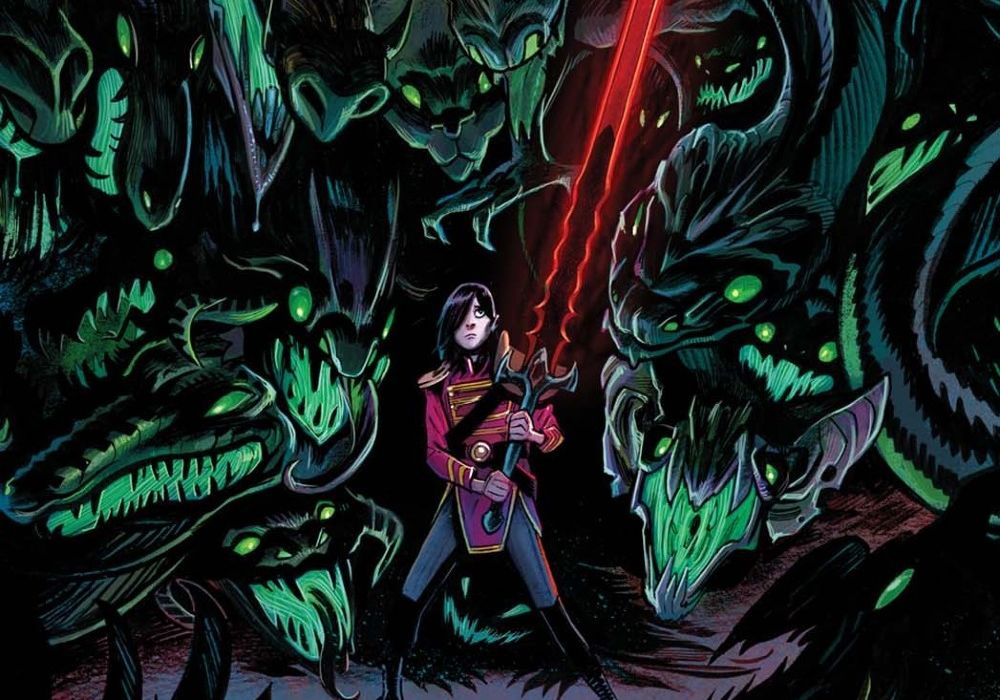 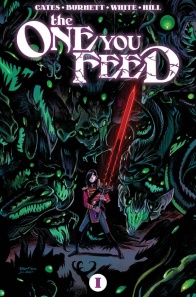 – Panel Syndicate has launched the five-issue series “The One You Feed,” a “fantasy terror tale” from the “Cosmic Ghost Rider” team of Donny Cates and Dylan Burnett. The writer and artist, respectively, are joined by colorist Dean White and letterer/designer John J. Hill for the tale of a young prince, armed with a mysterious sword named Attum. The Hollywood Reporter has more details on the story: in a future where the entire population is transformed into demons every night, the city of Helios lives beneath an artificial sun under the rule of Solomon. Prince Apollo, Solomon’s son, is sent out into the wilderness to prove himself worthy of the throne – but his quest might not be all that it appears to be. Cates teased this project back in April, sharing a piece of Burnett and White’s art on Twitter and later confirming the project shares a connection to his previous work “God Country.” “The One You Feed” #1 is available here.

– In a featured report from Business Insider, two black former editors at DC Comics detailed a history of career obstacles they faced at the company, both of whom felt they faced hindrances because of their race. Harvey Richards, a former associate editor who was let go in 2019, and Lateef Ade “L.A.” Williams, a former assistant editor who resigned in 1999, told of a lack of opportunities for advancement provided by the company, even as they excelled in their work. Both described confrontations with former publisher Paul Levitz, who told Richards he had “grammar problems,” and Williams that he would never be promoted while Levitz was publisher. Williams described conflict with then-executive-editor Mike Carlin (now a DC Entertainment creative director), who offered Williams the opportunity to take over a fired white associate editor’s workload without a promotion to associate editor. The full story is available at Business Insider.

– As the final issue of Book One was published yesterday, BOOM! Studios announced that “Wynd” will return for Book Two, titled ‘The Secret of the Wings,’ next spring. The YA fantasy series from James Tynion IV, Michael Dialynas, and Aditya Bidikar, was originally planned for release as a series of graphic novels, but switched to an ongoing series format to bring business back to local comic shops during the ongoing COVID-19 pandemic. “Wynd” #6 picks up with young Wynd and his friends on the run and far from home, facing a great, wide world full of vampires, faeries, conspiracies, and even greater dangers than those they left behind. “Wynd Book One: The Flight of the Prince” will be collected exclusively at comic shops in March 2021, and “Wynd” #6 is set for release in May 2021.

– io9 has a first look at Dark Horse’s new “Hellboy Universe Essentials,” a collection of trade paperbacks that will offer the must-read stories from Mike Mignola’s long-running series. Each book in the four-volume series will focus on a different subject within the world: Hellboy, the Bureau of Paranormal Research and Defense (BPRD), the vigilante Lobster Johnson, and Sir Edward Grey the Witchfinder. Each trade will feature new cover art drawn by Mignola, and colored by longtime Hellboy collaborator Dave Stewart. “Hellboy Universe Essentials: Hellboy” drops in July 2021.

– The FX on Hulu series adaptation of “Y: The Last Man” has entered into production – with two new cast members. Via Deadline, Ashley Romans and Olivia Thirlby have joined the cast, replacing the previously announced Lashana Lynch and Imogen Poots in their respective roles as Agent 355 and Hero Brown. They join Ben Schnetzer (who similarly replaced Barry Keoghan in the lead role of Yorick Brown), Diane Lane, Amber Tamblyn, Marin Ireland, Diana Bang, Elliot Fletcher, and Juliana Canfield in the adaptation of Brian K. Vaughan and Pia Guerra’s critically-acclaimed series. The story is set in a post-apocalyptic world where a cataclysmic event kills every mammal with a Y-chromosome, except for Yorick Brown, the titular “last man,” and his pet monkey. Eliza Clark is the showrunner for the series, which is scheduled to air sometime in 2021.

– Via Anime News Network, Netflix has announced a live-action film adaptation of Ching Nakamura’s “Gunjō.” The yuri drama manga follows a woman who asks another woman who is in love with her to kill her abusive husband, after which the two women go on the run. The adaptation will be retitled Kanojo (Her), and will star Kiko Mizuhara and Honami Satō. Ryūichi Hiroki will direct from a screenplay by Nami Sakkawa, with Haruomi Hosono performing the theme song. Kanojo is set to premiere on Netflix in spring 2021.

– As the U.S. election approaches, London-based publisher Erly Stage Studios is using comics to combat the spread of misinformation. Via Forbes, the small press is partnering with the U.S. government’s Cyber Infrastructure and Security Agency (CISA) to produce “Real Fake,” an online graphic novel that CISA hopes will highlight the threat posed by online disinformation. The book follows Rachel O’Sullivan, a “gamer, patriot and member of Symous – a group fighting disinformation and foreign interference in elections as polling day approaches.” You can check out the graphic novel here.

– Via Deadline, Chicken Soup for the Soul Entertainment has announced the new comic book-themed supernatural horror series Safehaven. Created by James Seale (30 Below), Safehaven follows Jenna Frost (Belle Shouse, Queen America) a high school comic book artist who must fight to uncover hidden truths after horrifying visions from her drawings come to life, threatening everyone around her. The cast also includes Stephen Moyer (True Blood, The Gifted) and Antonio Cipriano (Broadway’s Jagged Little Pill), with Emmy Award-winner Brad Turner (Homeland) on board to direct. Production on the show is set to begin in January 2021.

– Via Variety, Warner Bros. has greenlit a number of new animated series for both HBO Max and Cartoon Network. The series include the Tiny Toons Adventures reboot Tiny Toons Loonversity, a new project from Genndy Tartakovsky called Unicorn: Warriors Eternal, and Unlimited Squirrels! from author and illustrator Mo Willems. Tiny Toons Loonversity will feature characters from the original 1990-1992 series returning for a two-season order, with Steven Spielberg back to executive produce as well.

Tartakovsky’s Unicorn: Warriors Eternal is inspired by myths from across the world, following a team of ancient teen heroes as they work together to protect the world from an unforeseen omen. An adaptation of his popular book series, Unlimited Squirrels! is part of Mo Willems’s multi-year deal with HBO Max; as part of that deal, Warner Bros. has also greenlit the CGI animated rock special Naked Mole Rat Gets Dressed: The Rock Special”, and a pilot order for a live-action immersive series, Cat the Cat’s Show the Show Show with YOU the YOU!”. No release date for these series has been announced. 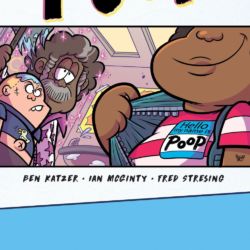 Welcome back to The Rundown, our daily breakdown on comic news stories we missed from the previous day. Have a link to share? Email our team at rundown@multiversitycomics.com.– Wonderbound is set to release a new book about the power of Poop. Via The Beat, the Vault Comics imprint has announced the middle-grade graphic novel “Hello, […] 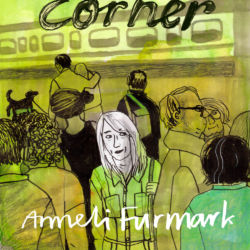 Welcome back to The Rundown, our daily breakdown on comic news stories we missed from the previous day. Have a link to share? Email our team at rundown@multiversitycomics.com.– Canadian publisher Drawn & Quarterly has revealed two new graphic novels from Anneli Furmark and Jessica Campbell releasing March and April 2022, respectively. “Walk Me To The […] 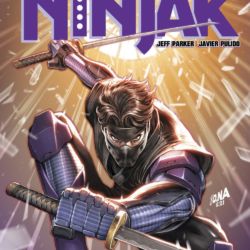 Welcome back to The Rundown, our daily breakdown on comic news stories we missed from the previous day. Have a link to share? Email our team at rundown@multiversitycomics.com.In case you missed it, we said goodbye to “Earth X” and “Static” artist John Paul Leon, who passed away on Sunday at the age of 49.– The […]