In case you missed it, we talked to artist Robert Wilson IV about his series, “Heartthrob,” in an interview from New York Comic Con. 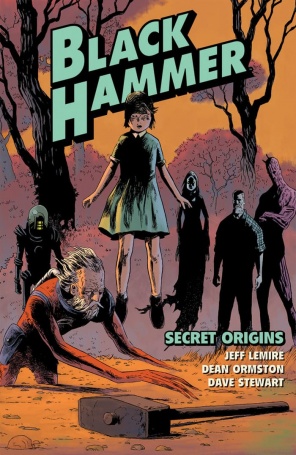 – Legendary Entertainment picked up the film and TV rights for Jeff Lemire and Dean Ormston’s “Black Hammer.” The New York Times reports that Legendary plans to spin the many “Black Hammer” titles off into a variety of projects, creating their own superhero universe. “The way [Lemire] mapped out the universe, and all the time periods, for me, it feels like something very special there,” said Legendary’s president, Nick Pepper. You’ll, of course, hear more about this project in Lemire County, if and as it develops.

– It was a busy day for Insomniac’s recent Spider-Man video game. First, Insomniac dropped the first look at the next Spider-Man DLC: Turf Wars. Then, Game Informer announced that Spider-Man’s nominated in seven 2018 Game Awards categories, including Game of the Year. You can vote for the game and other favorites from this year here, and the winners will be announced at the ceremony on December 7.

– Variety reports that Pedro Pascal (Game of Thrones) is expected to star in Disney+’s The Mandalorian. The series, which is set between Return of the Jedi and The Force Awakens, will follow the adventures of a lone Mandalorian gunfighter adventuring in the New Republic’s outer reaches.

– In more robot manga news, Anime News Network learned a new “Astro Boy” series, titled Go Astro Boy Go!, is set to premiere soon. The show is aimed at preschool children, and will consist of 52, 11-minute episodes. You can read the full report for the word on all the animated “Astro Boy” projects currently in development.

– Lastly, Anime News Network also reported that writer, essayist and critic Fred Patten has died aged 77. He wrote for numerous publications concentrating on fantasy and science-fiction, anime, manga, and the furry fandom, and was a founding member of the original Los Angeles-based Cartoon/Fantasy Organization (C/FO), one of the first American anime fan clubs. He also worked at the anime distributor Streamline Pictures, where among other things, he oversaw the 1992 English-language release of Hayao Miyazaki’s Lupin the Third: The Castle of Cagliostro.