In case you missed it, comics journalist Tom Spurgeon has died at the age of 51. We also interviewed Warwick Johnson-Caldwell on “Our Encounters with Evil,” and Stephen Byrne and Mark Russell on “Wonder Twins,” while DC announced the oversized “Flash” #750. 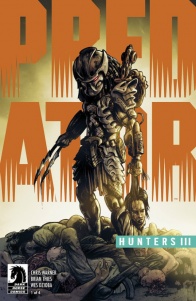 – Writer Chris Warner, artist Brian Thies, and colorist Wes Dzoiba are collaborating with Dark Horse Comics on “Predator Hunters III.” The four-part miniseries follows on from the previous “Predator Hunters” series, and tells the story of ex-drug runner Raphael Herrera, a member of the Predator Hunters team who has to confront his past traumas when he ventures into the jungles of central America, where cartel members are being slaughtered by the Predators. “Predator Hunters III” #1 hits shelves on February 5, 2020 with a variant cover by Andy Brase.

– Laurie Halse Anderson, the author of the graphic novel “Wonder Woman: Tempest Tossed,” spoke to Entertainment Weekly about her upcoming YA story this week. The story looks to offer a more grounded and topical origin story for Diana Prince as she encounters refugees, homelessness, child trafficking and the endemic problems behind it all. “To tell a story that’s fun but also reflects the reality of so many of our fellow Americans and to do it in a way that can hopefully cause readers to have some conversations about immigration to America, what America stands for, or at the very least reflect within themselves, that was very important to me,” said Anderson. The novel hits shelves on June 2nd 2020 with art by Leila del Duca.

– Vault Comics will be launching “Pulp and Paint,” a series of pulp novel-inspired variant covers by Tim Daniel and Nathan Gooden starting with “Vagrant Queen: A Planet Called Doom” in January 2020. “Once Adrian suggested ‘Pulp and Paint,’ I couldn’t resist the opportunity to get back to my roots,” said Gooden. “My love for Sci-Fi and Fantasy can be traced back to one moment: the time I held my first Frank Frazetta cover. Our Vault Vintage initiative started us down this road, but ‘Pulp and Paint’ gives me and Tim the chance to fully explore what inspired our careers in comics.” The series follows the trend set by the “Women In Front” cover series in 2018 and this year’s “Vault Vintage” initiative. Every first issue from the publisher next year will receive a special “Pulp and Paint” variant cover. The announcement also teased the as-of-yet unannounced comic “Finger Guns” #1 which releases in February 2020.

– Psychologist Dr. Tony Ortega and artist Alex Garcia have announced “The Accords.” The seven person super-team has members representing many facets of the LGBTQIA spectrum who will go up against a pervasive evil that’s straining the peace, unity and freedom of the United States of America. The debut issue features the team preventing the terrorist plot of the Morticana Order as they defend New York Comic Con. The comic by Phoenix Rising Creations launched this week on comiXology under their comiXology Submit program.

– Avengers: Endgame directors Joe and Anthony Russo are executive producing the documentary series SLUGFEST, based on the Reed Tucker novel Slugfest: Inside the Epic, 50-Year Battle Between Marvel and DC. The series, according to the press release, “chronicles the growth of a new American art form — Comic books — as it tracks the rise of two groundbreaking creative companies who went on to become the comics-publishing powerhouses, Marvel and DC.” The documentary will be directed by Don Argott and Sheena M. Joyce, and looks to chronicle the “remarkable behind-the-scenes endeavors and achievements that defined these industry titans: from the secret crossover inspired by the Halloween parades of small-town Rutland, Vermont, to the history behind the bone-crushing handshake between Superman and Spider-Man, in the first official crossover.” The series will debut on the upcoming streaming service Quibi when it launches on April 6, 2020 in the US.

– Director Spike Lee is directing an adaptation of Ron Wimberly’s “Prince of Cats.” The film puts an ’80s spin on the Romeo and Juliet character Tybalt Capulet, the titular Prince of Cats, as he views the classic romance of Romeo and Juliet from his rage-marred perspective and traverses Da People’s Republic of Brooklyn, the film’s modern Verona. Lee, Wimberly and writer Selwyn Seyfu Hinds will be collaborating on the film’s screenplay. The graphic novel was initially released under Vertigo before being reissued by Image Comics, and was praised for its organic intersection of Hip-Hop culture with Shakespearean theater, placing it in a similar vein to Baz Luhrmann’s Romeo + Juliet. The film will be distributed by Legendary Entertainment.

Welcome back to The Rundown, our daily breakdown on comic news stories we missed from the previous day. Have a link to share? Email our team at rundown@multiversitycomics.com.In case you missed it, we covered:– Marvel’s reveal that the New Fantastic Four will return in “Fantastic Four” #22, one of many new “Empyre” tie-ins announced yesterday.– […]

Welcome back to The Rundown, our daily breakdown on comic news stories we missed from the previous day. Have a link to share? Email our team at rundown@multiversitycomics.com.In case you missed it, legendary French cartoonist Claire Bretécher passed away aged 79, and Scott Snyder and Greg Capullo are plotting another blockbuster with “Dark Nights: Death […]