In case you missed it, DC announced “DCeased: Unkillables” and “The Green Lantern: Season Two;” Marvel announced a “Nebula” solo series; and Dark Horse announced “Hellboy and the B.P.R.D.: The Return of Effie Kolb.” We also have exclusive previews of next week’s “Archie: The Married Life 10th Anniversary” #4 and Marvel’s “Annihilation – Scourge Alpha” #1. 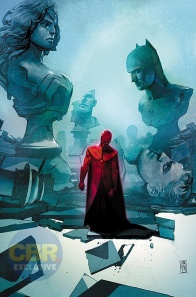 – CBR has an exclusive first look at the cover art and solicitation text for DC’s “Leviathan Dawn” #1, by writer Brian Michael Bendis and artist Alex Maleev. Spinning out of “Event Leviathan,” this one-shot will explore how the DC heroes cope with the aftermath. With the world’s intelligence agencies dismantled and the landscape changed, where does that leave them? The book hits shelves February 26, 2020.

– DC also announced “Superman: Villains,” a 48-page one-shot looking at how the villains of the DCU react to Superman revealing his secret identity to the world. The comic is written by Brian Michael Bendis, Greg Rucka, Matt Fraction and Jody Houser, with art by Bryan Hitch, Steve Lieber, Mike Perkins and Eduardo Pansica, and comes out February 12.

– THR reported that, after 50 years, the late “Corto Maltese” creator Hugo Pratt will have his early war comics republished under Rebellion’s Treasury of British Comics. They will be featured in “Battle Stations,” the first book in the ‘War Picture Library’ series, available in the US from February 18, 2020, and the UK two days later on February 20.

– According to an exclusive from Deadline, director Julie Anne Robinson (Weeds) has set up five projects, one of which is The Bunker at NBC. Based on the Oni Press comic by Joshua Hale Fialkov and Joe Infurnari, the show will revolve around five friends who discover a bunker filled with letters from their future selves.

– From Dwayne “The Rock” Johnson’s Instagram account, we got to see an official poster of the actor as Black Adam, created by Jim Lee (Co-Publisher and Chief Creative Officer of DC Comics) in collaboration with BossLogic. The poster also revealed the film is due out on December 22, 2021.

– Finally, Randall Munroe (creator of the “XKCD” comic) has a new recurring science feature in The New York Times. In the feature, called ‘Good Question,’ you get to read about science as well as enjoy some of the comedic artwork of Mr. Munroe. The first article is called “If I Touched the Moon, What Would It Feel Like?“

From Puerto Rico now in Brooklyn. I'm bilingual, a gamer, a redditor, and obviously, a comic book guy!