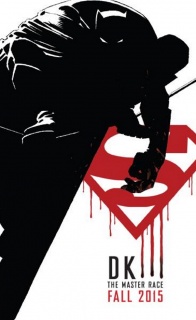 – As you’re planning your breaks from binge-watching of Jessica Jones (or The Man in the High Castle, In case you were looking into some counter-programming ideas), you might want to think of taking one around 10am PST/1 pm EST, as that’s when Frank Miller will be participating in a Twitter Q&A centered around “DKIII”, the latest in his “Dark Knight” series of comics. You can find the details at the link. Since this is DC-sponsored and facilitated, I wouldn’t expect any gotcha questions to get through or that Miller’s responses would be too unrehearsed. That said, I wasn’t expecting his Newsarama slip-up to get out either, so what do I know?

– Getting back to Jessica Jones, EP Melissa Rosenberg talked to Deadline about the new series, what the plans are for Season 2, and how the show would have been different if it had actually landed on ABC as originally planned. Warning: there are some level of spoilers included.

– io9, the sci-fi/comics/geek hub of the Gawker blog empire, is being downgraded from having its own site and will be folded into the Gizmodo hub in the near future. Bummer. The site’s content backlog should still be accessible through the new Gizmodo setup.

– Dear Zack Snyder & David Goyer: if Mark Millar is saying you went too over-the-top with violence in your story, then guess what? You probably went too far.

– When it comes to listening to directors talk about the movie they just finished making, you rarely hear them say things like, “I didn’t know what the hell I was doing.” Especially from a director like Peter Jackson on a logistically nightmarish project like The Hobbit trilogy. But apparently that was the case. I guess instead of looking at them as failures we should be astounded they actually made it all the way to the screen in the first place?