In case you missed it yesterday, Craig Thompson is creating his first serialized comic work in “Ginseng Roots,” which begins July 2019. We also have an exclusive preview of tomorrow’s “Batman: Kings of Fear” #4. 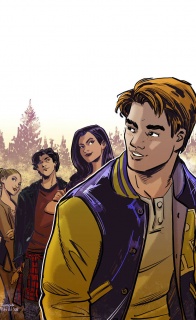 – Kicking off, Archie Comics announced a new tie-in comic to the current third season of Riverdale written by novelist Micol Ostow with art by both Thomas Pitilli and Joe Eisma. The series is set to tease out more of the “Gryphons & Gargoyles” plotline taking place currently in the show. Ostow, who also wrote the upcoming, Riverdale: The Day Before novel, will be working with the writing room of the third season of the show. “Riverdale Season 3” #1 hits shelves March 13, 2019.

– Avery Hill Publishing has announced its slate of four books for 2019. You can find more details here about all four of the announced titles which are: “Desolation Wilderness” by Claire Scully, “Sennen” by Shanti Rai, “Marble Cake” by Scott Jason Smith, and “Internet Crusader” by George Wylesol.

– Comic book writer Denny O’Neil is set to be honored for his “lifetime of achievements in pursuing causes of peace and justice” on December 7th and 8th at the Jimmy Carter Presidential Library in Atlanta, Georgia. O’Neil will be appearing with other creators like Christopher Priest at the “Comic Books and Social Justice” event in conjunction with the charity The Hero Initiative. You can read more about O’Neil, his work on “Batman,” and his time with Dorothy Day and The Catholic Worker movement, here.

– Yumi Tamura’s manga, “7SEEDS,” is set to to be adapted into an anime by Netflix. The news broke as part of “Monthly Flowers”‘ January 2019 cover debut, the same magazine the series ran in from 2001-2017. The series centered around the character Natsu, who, along with six other strangers, wake up stranded in the middle of the ocean, and end up a part of a government preservation experiment in a post-apocalyptic world. No further details or release dates have been announced.

– Scottish comic company BHP has signed a deal with California-based book distributor SCB, in order to get their books into the North American market. The company has also partnered with European digital platform Inzeo to get their books into other parts of the continent. The company has published books like the anthology “We Shall Fight Until We Win,” the book “Killtopia” and are set to publish two new books: “Dungeon Fun” by Colin Bell and Neil Solance, and “Rolled a One” by Chris Baldie.

– The owner of Arsenal Comics and Games in Newbury Park and Ventura, California, Timmy Heague, is trying to organize a small comic convention, with proceeds to go to some of his customers who have lost everything in the recent wildfires in the state. The con is set to take place in early January, and Heague is looking for Southern California-based creators or others looking to help.

– Finally, ahead of the release of Aquaman on December 21st, lead actor Jason Momoa is set to host Saturday Night Live on December 8th, with musical guest Mumford & Sons. It’s sure to be a…swimmingly good time. Get it?

Welcome back to The Rundown, our daily breakdown on comic news stories we missed from the previous day. Have a link to share? Email our team at rundown@multiversitycomics.com.In case you missed it, Titan Comics announced “Horizon Zero Dawn” will start in late July, and Roman Arambula, the artist on the “Mickey Mouse” comic strip, passed […]

Welcome back to The Rundown, our daily breakdown on comic news stories we missed from the previous day. Have a link to share? Email our team at rundown@multiversitycomics.com.— Oni Press announced that the next installment in its “A Quick and Easy Guide” series will be hitting shelves on October 28, 2020. “A Quick and Easy […]

Welcome back to The Rundown, our daily breakdown on comic news stories we missed from the previous day. Have a link to share? Email our team at rundown@multiversitycomics.com.In case you missed it, “Asterix” co-creator Albert Uderzo has passed away at 92 after a heart attack.– Rebellion Publishing has reassured readers that despite the coronavirus pandemic, […]