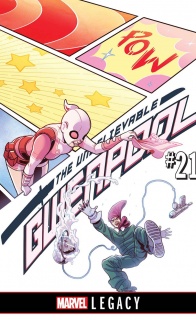 – Kicking off, Marvel’s Senior VP of Publishing/Executive Editor, Tom Brevoort, took to Twitter today to comment on the recent cancellations of many Marvel series, only three months into Legacy. Brevoort reminded fans even series like “X-Men” have been cancelled before, and that just because a title is cancelled doesn’t mean the story is over. Six titles (“Jean Grey,” “Unbelievable Gwenpool,” “Generation X,” “Hawkeye,” “Luke Cage,” and “Iceman”) are confirmed to be cancelled in January, February, and March, with the status of “America” and “Defenders” still unknown.

– In more Marvel Comic news, Pepe Larazz, one of the artists on the upcoming weekly “Avengers: No Surrender” series, shared his designs for the revamped Lethal Legion. The new Lethal Legion are among the villains for the 16-week crossover and will consist of existing villains Metal Master, Captain Glory, and the Blood Brothers as well as new villains Mentacle, Chall, and Ferene. Mark Waid, Al Ewing, and Jim Zub are co-writing the event with Larraz, Kim Jacinto, and Paco Medina alternating on art duty. “No Surrender” begins January 10th in “Avengers” #675.

– Gail Simone and Cat Staggs’s Image Comics series “Crosswinds” has been optioned to television through a new partnership with producer Vanessa Piazza and her company Piazza Entertainment with Entertainment One. Simone is writing the pilot and is also executive producing alongside Ari Lubet with Staggs serving as a consulting producer. Piazza is also in the process of developing a series based on the superhero anthology “Masked” of which writers like Simone, Paul Cornell, and Lilah Sturges have contributed.

– Ben Morse, Marvel Digital Media’s Editorial Director, announced yesterday he is leaving Marvel Entertainment to take a professorship position at the University of Nevada, Las Vegas. Morse has been at Marvel in various positions since 2007 and is leaving to become a Visiting Professor of New Media at UNLV. Branding Manager at Image Comics, David Brothers, also announced his resignation yesterday after being there since 2013.

– Arrow executive producer Marc Guggenheim stated in an interview that DC Comics is not allowing the Arrowverse to use certain characters. In an interview at ACE Comic Con, Guggenheim revealed that they can no longer use Deathstroke, after him playing a big role in the first two seasons and then having been brought back for a few episodes in Season 5 and 6. Guggenheim also stated that Warner Bros would not let him use the DC character The Question implying that they have live-action plans for that character as well.

– Continuing the will-he-won’t-he of Ben Affleck’s DCEU future as Batman, the actor revealed he would still very much like to direct a stand alone Batman movie. Affleck was originally planned to direct a Batman movie but stated, “never got a script that I was happy with, so they are starting over and writing another script.” Matt Reeves is currently signed on to direct the next Batman installment in the DCEU, with Affleck still unsure if he will return.

– More details on Teen Titans Go! to the Movies have been revealed following the film’s announcement back in September. A new synopsis for the film showcases the plot will revolve around the Teen Titans being jealous of all the other superheroes and teams getting movies, which leads them to set out for Hollywood to find a director to make their movie when shenanigans ensue. The film drops next year July 27, 2018.

– It appears that the new “Fourth World Omnibus” that collects the entirety of Jack Kirby’s Fourth World saga has a major printing error. One page has been reprinted twice, and the second instance replaces a page. Just in time for the holidays.