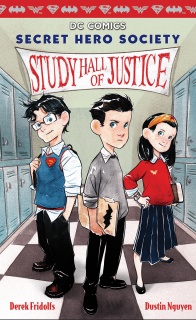 – Want more of “Li’l Gotham” in your life? Good news! Creators Dustin Nguyen and Derek Fridolfs are working on a new all-ages series with DC and Scholastic called “Secret Hero Society:Study Hall of Justice”! This new series of books follows a young Bruce Wayne, Clark Kent, and Diana Prince as they navigate a school with nefarious characters like the jock Bane and Hugo Strange who I assume is showing up as a creepy nurse. Check out all the details and an interview with the team at Comic Book Resources.

– Is the best Star Wars character ever going to appear in Rogue One? No, there’s no reason to believe that Lando will show up, but the folks over at ComicBookMovie think one of the more boring characters might pop up. For the sake of spoilers, we’re going to just leave the link there for anyone who wants to check out the inadvertent leak from Lego. Considering their tendency to spoil upcoming movie details with their own toy sets, there’s a good chacne this prediction is solid.

– Elizabeth Banks will show up as Rita Repulsa in the new Power Rangers movie, according to The Hollywood Reporter. They also approached Oscar Isaac about playing Ivan Ooze but the X-Men: Apocalypse star wanted to try something different.

– Remember when Archer stopped being a spy show for a season and followed as all of the ex-secret agents sold cocaine for a whole season in a Miami Vice homage? Well, Archer’s doing something similar ot that again, with everyone moving to LA to form a Magnum, P.I. style detective agency. Check out the details at Uproxx.

– Entertainment Tonight is reporting that the creators of The Force Awakens were thinking about putting Yoda into the movie, maybe for a dream sequence or something. They even got Frank Oz to show up and do some voicework!

– After the Titans pilot got rejected by TNT, TVLine is reporting that Warner Bros. executives are hopeful that the series will see the light of day some other way. Like, through a weird pseudo-anime adaptation or something.