In case you missed it, Russ Cochran passed away aged 82, and Lucasfilm announced Star Wars: The High Republic. 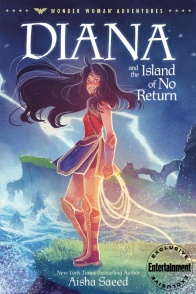 – We have a first look at Aisha Saeed’s Diana and the Island of No Return thanks to Entertainment Weekly. The DC prose novel is the first in the Wonder Woman Adventures series, a trilogy aimed at readers aged 8-12. Saeed is known for her novel Amal Unbound, and will be telling the story of Diana’s early adventure to gain independence on the island of Themyscira. The book releases May 26, and you can read the whole first chapter right now on EW.

– There’s been a major shake-up within the Walt Disney Company, with Bob Iger stepping down as CEO and Bob Chapek taking his place. Chapek was previously the Chairman of Disney Parks, Experiences and Products for 27 years, but will now fill the position Iger has held since 2005. Iger will continue as Executive Chairman, directing the company’s creative endeavors until the end of his contract on December 31, 2021. “With the successful launch of Disney’s direct-to-consumer businesses and the integration of Twenty-First Century Fox well underway, I believe this is the optimal time to transition to a new CEO,” said Iger. “I have the utmost confidence in Bob and look forward to working closely with him over the next 22 months as he assumes this new role and delves deeper into Disney’s multifaceted global businesses and operations, while I continue to focus on the Company’s creative endeavors.”

– Dark Horse Comics have announced a translation of Anders Skoglind’s The Troll Guide. Paul Fischer will be translating the comedic all-ages book to English for a July 2020 release date through Dark Horse Books. The guidebook gives aspiring adventurers all the information they would need to know to survive their interactions with trolls and the various creatures of the mountains. The book will be available in comic shops on July 22, 2020, and in bookstores on August 11, 2020.

– There will be a memorial service for Howard Cruse, the late LGBTQIA+ activist and cartoonist, in the New York LGBT Community Center on March 8. Cruse passed away on November 26 from lymphona at the age of 75. Cruse was a pioneer for LGBTQIA+ representation in comics as the creator of the anthology series “Gay Comix,” and as the writer of DC’s “Stuck Rubber Baby,” a story of sexual exploration during the Civil Rights Movement. His other famous works include “Barefootz” and “From Headrack to Claude.” The memorial service will be held from 6:00-8:30 pm ET on March 8.

– The Calgary Herald apologized on Twitter for its publication of a racist cartoon. The comic was a part of the strip “Close To Home” by John McPherson; it featured caricatures of The Lone Ranger and his partner Tonto in a bar, with Tonto pressing his ear to the bar and remarking, “Tonto can hear last call coming.” The derogatory depiction of the Native American character feeds into an ongoing controversy of indigenous stereotypes in media. The Herald has since apologized, stating that their cartoons are syndicated through a third party, and have since decided to no longer publish the cartoon.

– Manga publisher Tokyopop have announced a new imprint of romance comics called Love x Love. The imprint will include print manga, graphic novels and digital magazines all centered around standalone romance titles. The stories will be split into two age categories, shojo for teenage readers (13+), and josei for mature readers (18+), with titles representing a variety of genders and sexual orientations by Japanese, Chinese and Korean authors, among others. The magazine will debut on March 14 which is White Day in Japan, a romantic holiday where men repay the gifts that women gave them on Valentine’s Day. Although there’s been no creative teams announced as of yet, the magazine will include the stories “Scarlet Soul,” “Dekoboko Sugar Days,” “RePlay,” “Still Sick,” and “Breath of Flowers.” Subsequent issues will begin publishing in Fall of 2020.

– Warren Ellis and Paul Duffield’s webcomic “Freakangels” will be getting an anime adaptation thanks to Crunchyroll. Initial footage was revealed in a trailer for the new slate of Crunchyroll originals as one of eight new projects. The series’ synopsis reads, “After civilization comes to a sudden and crashing end, twelve 23-year-old psychics living in the rubble of London must check their wild impulses and discover their better angels in order to rebuild society.” There’s been no specified release date other than a vague window of 2020 for the series.

– With Birds of Prey (And the Fantabulous Emancipation of One Harley Quinn) continuing to underperform at the box office, it seems the film has undergone yet another name change in Japan. A new promo had the film roughly titled as Harley Quinn’s Great Awakening: Birds of Prey. This comes in the wake of the film being retitled in US theater listings as Harley Quinn: Birds of Prey in the hopes of raising ticket sales. The film opens in Japan on March 20.