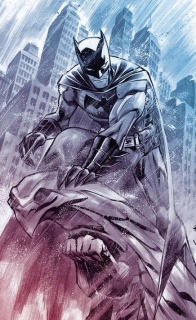 – We knew something was fishy when Fernando Blanco was handling the interior art for “Detective Comics” #41 and 42, and now we know why: Francis Manapul is leaving the title. Manapul, who was also co-writing the title with colorist Brian Buccellato, has been on the book since June 2014 in some capacity or another. He promises some announcements about new work soon, including something that will be solicited for October 2015, which means later this month. Manapul outlined through #44, and plotted through yesterday’s #42.

– In a move that should surprise absolutely no one, it appears that Guillermo del Toro has left Dark Universe, the “Justice League Dark”-ish movie. Del Toro, an incredibly talented directly, leaves a project roughly every 18 hours.

– Lucifer, which already has filmed a pilot, has replaced one of its key roles. “Dan,” an L.A.P.D. officer detective, was played in the pilot by Nicholas Gonzalez, but he has been replaced by Kevin Alejandro of True Blood and The Returned.

– The fourth Top Cow Talent Search is coming this September with some slightly different rules, as outlined by Comic Book Resources.

– Newsarama takes a look at the Disney purchase of Marvel and asks a simple question: was it worth the money? Even if that answer is somewhat up in the air right now (which, it really isn’t – it was super smart), long term, this has to be a huge win for Disney.

– Did Ron Perlman just confirm a third Hellboy movie? Probably not, but it is encouraging that there appears to be such interest in the property.

– The AV Club has an exclusive preview of “Godzilla in Hell” #1 by James Stokoe, and great googly moogly. Trust me, go take a look.

– And, finally, two of the good guys in all of comics, Jason Aaron and Jason Latour, will be donating all proceeds from their upcoming “Southern Bastards” #10 variant cover edition to the families of the Charleston shooting victims. The cover, which features the phrases “Death to the flag” and “Long live the South,” also features a dog destroying a Confederate Flag. Well played, Jasons.