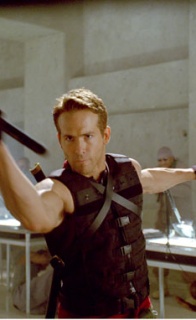 – Yes, that’s the image we’re using. The red band trailer for Deadpool hit the ‘Net last night and it was honestly pretty exciting. There was also a family friendly trailer but come on. The preview had a lot of footage from the leaked trailer shown at San Diego Comic-Con, with a few new bits (and a few naughty bits) thrown in. What’s interesting is just how Rated R the movie seems to be. I’m used to most superhero movies only being gratuitously violent or sexual if they’re an indie film or something but Deadpool seems set to alienate any parents whose kids want to see that Deadpool guy from the Ultimate Spider-Man cartoon. Speaking of, the use of “X Gonna Give It To Ya” makes me want to see DMX as Taskmaster. Make it happen, Fox. You’ve done worse.

– And by worse, we mean Fantastic Four. With the embargo on reviews for Fantastic Four lifted, word has been spreading about Fantastic Four. Particularly that it’s not too great. We’ll leave the finer points of that argument up to Alice’s review for Multiversity Comics, but feel free to check out this spoiler from Matthew Buck of Channel Awesome. It’s not a huge deal breaking spoiler, but enough to give you an idea of what the film’s like.

– Former The Walking Dead show runner Frank Darabont has updated his wrongful termination suit against AMC after the company reduced his profits from the show. Darabont’s also calling out the upcoming spinoff Fear The Walking Dead as derivative of his own work on the series. He also says the show isn’t nearly as good as the comic, and really should have introduced Tyreese way earlier.

– Heroic Hollywood claims that Kraven the Hunter will be the main villain in Marvel’s upcoming Spider-Man threeboot. This is why Sony shouldn’t have burned through Lizard, Electro, Rhino, and Harry Osborn. When you run out of villains, you have to establish your new Spider-Man with a thing for hunting people. At least it wasn’t the old guy with a bird fetish.

– So this is amazing. In preparation for their season finale on the El Rey Network Lucha Underground released a video that’s not even trying to pretend it ain’t the hallway fight from Daredevil. In case you don’t know, Lucha Underground is a pro wrestling show from Robert Rodriguez that is exactly what it sounds like. Everyone gathers into an Aztec Temple (actually a dirty Los Angeles warehouse) and fights for the glory of the seven Aztec tribes(?) That everyone includes a crazed mariachi player, a literal dragon, and a skeleton ninja who has been making sacrifices to his dark master by breaking people’s arms. It’s that same skeleton ninja who is coming after Vampiro, the guy in the video, so he can break his arm for ninja skeleton god. Vampiro, a color commentator named Ian Hodgkinson who is just trying his best to have fun, has responded by turning into the violent madman he was in the 90’s who once set a guy on fire in a graveyard. What we’re saying is, this si the best TV show you will watch tonight.

– Speaking of pro werstling Arrow star Stepehn Amell will definitely show up next week on Monday Night Raw to confront Stardust. Stardust, AKA Cody Rhodes, is the son of the recently deceased American Dream Dusty Rhodes who went crazy living in his family’s shadow. So, he became an inter dimensional alien who talks exactly like Frank Gorshin. He also might believe that the show Arrow is 100% non-fiction, and called out Amell when he was in the audience of a show a few weeks back. Now, Amell is probably going to show up as Arrow at the upcoming Summerslam event to actually face off against Stardust. I will be there live and I will lose my mind if he pulls out the boxing glove arrow as his finishing move.