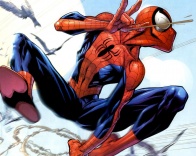 – So, a lot has been made of Marvel’s new Spider-Man movie and the fact that Peter Parker actor Tom Holland is so young. Well, director Jon Watts spoke to Empire about the film, confirming that Parker will be 15 in the film. It looks like Marvel are doubling down with the whole high school thing even more, foregoing the idea of Dawson’s Casting and just having actual children star as superheroes now.

– From Variety comes the news that Victoria Alonso has been made Executive Vice President of Physical Production at Marvel Studios. This is neat as she’s one of the few women to ever hold the position at any film studio and it’ll be interesting to see how she continues to develop visual effects at Marvel.

– Proving that there’s simply no justice in the world: Ant-Man has made more money that Captain America: The First Avenger and it hasn’t even opened in China yet.

– In an interview with Canoe (which is mostly about the god awful Doritos/Superbowl marketing gimmick), Zack Snyder mentioned that he considers Batman V. Superman to be Man Of Steel 2 “in a way.” What does this mean for our chances of seeing a Batman-less Superman movie any time soon? I don’t know, but it seems like that George Miller rumour is even less likely now.

– “Snowpiercer 3” is a comic that’s happening, apparently. Y’know, because that makes sense? Hopefully this yields another Electric Boogaloo-level of bad sequel joke like the Ice Breaker.

– John Landis is apparently convinced that Disney will finally be releasing the theatrical cuts of the Original Star Wars Trilogy on bluray, confirming that everyone but Disney realises it’s just losing them money not to.

– Finally, check out this sweet infographic about the visual evolution of The Joker over the years. What? It’s a slow news day, there’s nothing else I could do about it.

Welcome back to The Rundown, our daily breakdown on comic news stories we missed from the previous day. Have a link to share? Email our team at rundown@multiversitycomics.com.— Mainframe Comic Con is coming to a computer screen near you. The fully online con will broadcast live from Chicago Comics on April 25 and 26 and […]