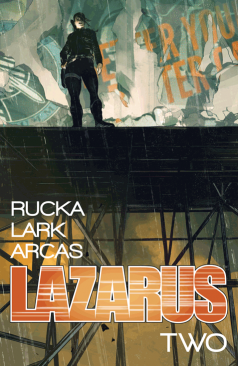 – This is the best news: Greg Rucka and Michael Lark’s “Lazarus” will become a TV show. Legendary TV and producer Matt Tolmach acquired the rights after a “competitive bidding war”, and Rucka and Lark will be executive producing alongside Tolmach with Rucka writing the pilot. While I don’t think every comic should be a TV show or movie, I think “Lazarus” should be one and it will be an awesome one at that, especially with Rucka scripting the pilot. Long story short, I’m all about this. Congrats to Rucka and Lark on the great news. It’s well deserved.

– Joseph Gilgun has been cast as Cassidy in “Preacher”, making two parts of the triumvirate complete after Ruth Negga was cast last week as Tulip. All we have now is Jesse Custer to complete it, but we’re off to a good start. I don’t have a ton of experience with Gilgun, but I have seen “Lockout”, and while that movie was pretty damn stupid, Gilgun was straight nasty in it. That’s a good characteristic for the Irish vampire he’s set to play. Looking forward to it.

– Al Ewing and Alan Davis are pairing for “Captain Britain and the Mighty Defenders”, yet another “Secret Wars” tie-in series that…okay, these things are getting ridiculous. SO MANY TIE-INS. UNCLE, MARVEL. UNCLE.

– Hawkeye is getting an action figure and, most importantly, Lucky – aka Pizza Dog – will be an accessory.

– This Time piece looks at the Batgirl cover controversy and has a pretty fair and balanced perspective, although it sort of accomplishes that by sitting on the fence. Granted, I’m a fencer sitter on that subject and many others as well, so I have a hard time blaming the writer.

– Marvel’s putting together a month of New York City themed covers. They looooove theme months these days, don’t they?

– Leave it to Bleeding Cool to really open up the #ComicGate.