Omnibus Press, the music-related book publisher, has announced the release of “Tales of the Smiths: A Graphic Biography,” which will retell the youth of Johnny Marr, Morrissey, Andy Rourke, and Mike Joyce as they progressed toward their formation of one of the most influential alternative rock bands of all time. 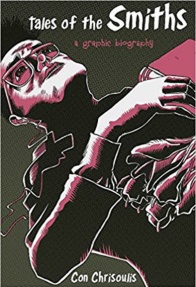 This 464-page Smiths comic comes from Con Chrisoulis, the Greek Australian artist and writer known for his socially and politically critical graphic novels. Chrisoulis is no stranger to music-based projects, being the creator of “Rebel Rebel,” the online graphic biography of David Bowie, in addition to being – appropriately – a singer-songwriter of post-punk concept albums.

“Tales of the Smiths” originally began as an online comic strip in 2012, running until 2014, detailing the unknown aspects of the Smiths’ teenage years and the musical influences that led to their development, such as New York Dolls, Nico, Sex Pistols, and Patti Smith. The stories from Chrisoulis’ two-year long online comic will now be compiled as a complete collection.

Simon Wolstencroft, the man who was almost the drummer for the Smiths, and a long-time associate of the band, will write the introduction for the book, which is now available for pre-order and set to hit shelves in the UK on March 22.

Jonathan is a professional editor by day and writes fiction, comics news, and music. He spend a disproportionate amount of time rock climbing and is partial to slice-of-life and non-superpowered comics.