Humanoids have announced “The Twilight Man,” a graphic biography of The Twilight Zone creator Rod Serling written and illustrated by Koren Shadmi (“Rise of The Dungeon Master: Gary Gygax and The Creation of D&D”). Due out in October, the novel will explore Serling’s early life and career, battling against censorship in radio and television until he hit upon writing science fiction to explore themes he wanted like war and racism. Here’s the synopsis: 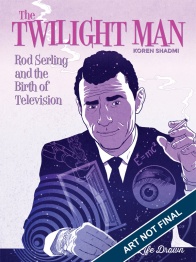 We recognize him as our sharply dressed, cigarette-smoking tour guide of The Twilight Zone, but the entertainment business once regarded him as the “Angry Young Man” of Television. Before he became the revered master of science fiction, Rod Serling was a just a writer who had to fight to make his voice heard. He vehemently challenged the networks and viewership alike to expand their minds and standards—rejecting notions of censorship, racism and war. But it wasn’t until he began to write about real-world enemies in the guise of aliens and monsters that people lent their ears. In doing so, he pushed the television industry to the edge of glory, and himself to the edge of sanity. Rod operated in a dimension beyond that of contemporary society, making him both a revolutionary and an outsider.

The book has already received advance praise from Joe Dante, one of the directors of Twilight Zone: The Movie. He said, “Having experienced The Twilight Zone and Playhouse 90 first hand, I fancied myself as pretty clued in to the Rod Serling legacy, but I admit I learned a lot from Koren Shadmi’s unexpectedly poignant and cleverly observed graphic novel treatment of Serling’s life and career. It’s a unique take on the lasting work of a complicated man who found his greatest success when coding the messages of his socially conscious narratives into “a wondrous land whose boundaries are that of imagination.”