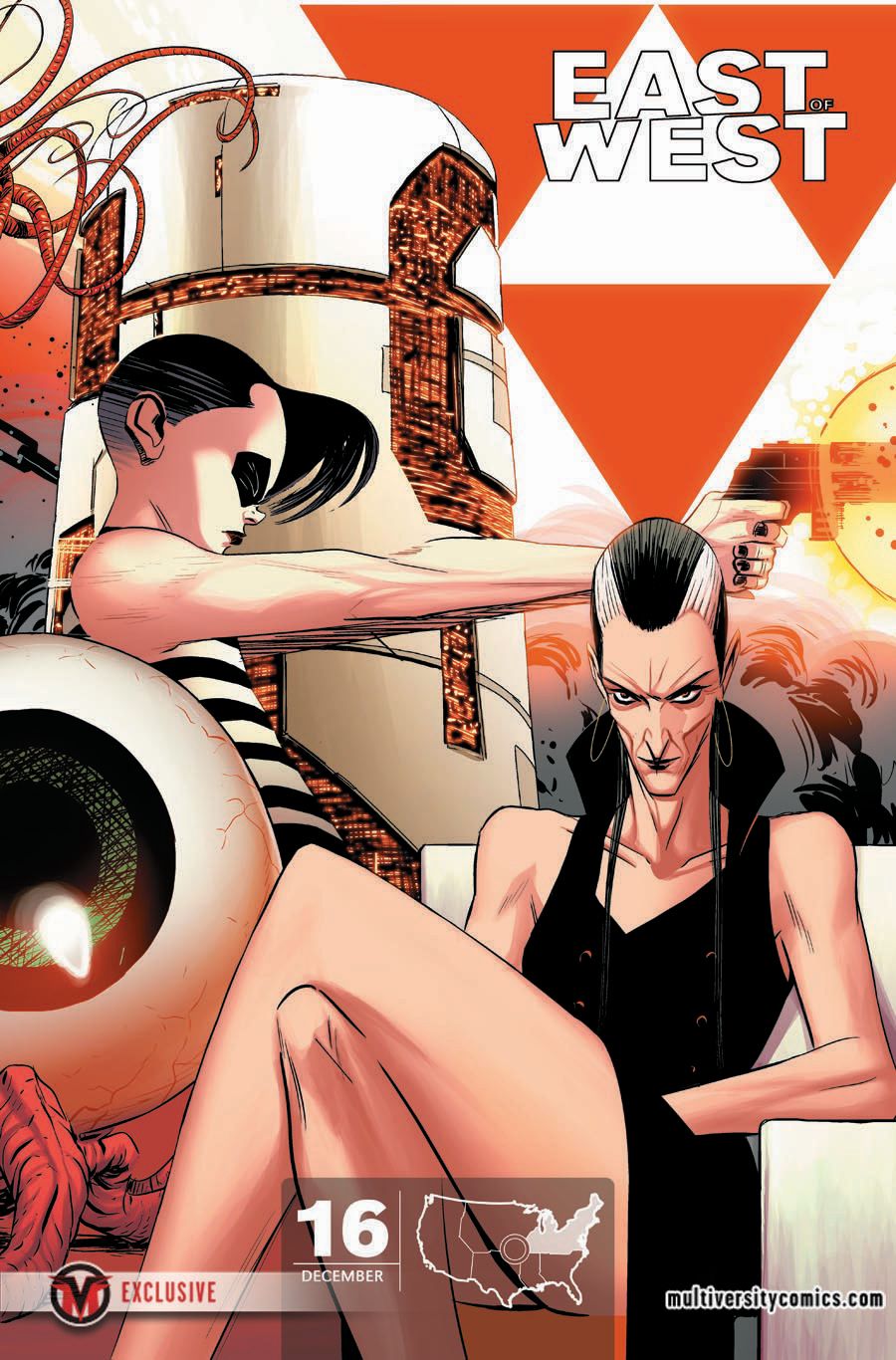 We here at Multiversity Comics are more than a little bit enamored with “East of West.” That’s why we’re happy and excited to bring you the latest in Image Comics’ day-long launching of the special interlocking covers for “East of West” issue #16 from Jonathan Hickman, Nick Dragotta, colorist Frank Martin, and letterer Rus Wooton. These covers are set to kick off year two for the book on December 31st, with each cover taking you to a different part of this world and showing off a different set of characters, from de facto heroes to apparent villains. In this world, though, there aren’t really heroes or villains. There are just survivors.

Multiversity Comics has been given the cover featuring The Union, the district of The Seven Nations that the sinister Antonia LeVay presides over. LeVay and her intimidating lackey Doma Lux are prominently featured on the cover. A little spoiler-free primer on The Union: The citizens are a horribly oppressed demographic, basically living in a complete and total police-state while LeVay stands at the podium periodically and waxes rhapsodic about how everything they do is going towards what is best for the people that live there. LeVay is also the prime instigator of the war of the Seven Nations that has recently begun in the pages of “East of West.” Sounds like a great place to live, doesn’t it?

To see the rest of the interlocking covers, click on the links below, and make sure to head to CBR in one hour to see the last remaining cover be revealed.

– The PRA
– Texas
– The Endless Nation
– The Confederacy
– The Kingdom

For the full press release from Image Comics, please see below.

Image Comics is pleased to announce that we are offering an exclusive set of covers celebrating the return of EAST OF WEST in December. Artist and co-creator Nick Dragotta and colorist Frank Martin Jr. have created a stunning seven-cover montage featuring nearly every series character featured to date.

“We are extremely excited with how East of West: Year Two is shaping up,” said co-creator and writer Jonathan Hickman. “Sometime when Nick and I were talking about where the story was going and all the unbelievable stuff we have planned, Nick latched onto the idea of doing a big piece that kind of reflected on what we’d already done and tease some of the things coming up. And, good lord, has he produced something jaw-dropping.”

Each cover represents one of the territories that make up the American Apocalypse and will be available on 12/31.