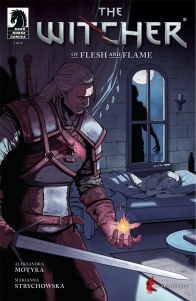 Polish video game publisher CD Projekt Red and Dark Horse Comics are teaming up yet again to bring you a new “Witcher” mini-series in December, “The Witcher: Of Flesh and Flame.” Comicbook.com have been given an exclusive first look at the first issue of the series, written by Alessandra Motyka (one of the writers of The Witcher 3: Wild Hunt), and illustrated by Marianna Strychowska (The Witcher Adult Coloring Book).

Dark Horse told Comicbook.com more about what to expect from the new mini-series: “Geralt is summoned by an old friend to help solve a mystery involving his daughter. Upon his arrival, Geralt is surprised by another friend from the past and he soon finds himself transported to regions beyond his original expectations.”

In addition to the new mini-series, Dark Horse have also announced “The Witcher: library Edition,” which will be available October 31, just in time for Halloween. The library edition will collect the previous Dark Horse “Witcher” series “House of Glass,” “Fox Children” and “Curse of Crows,” and the one-shot “Killing Monsters.” It will also have a sketchbook portion.

Based on the short stories and novels by Andrzej Sapkowski, The Witcher game franchise revolves around Geralt of Rivia, a mutated monster hunter, and his ward, Ciri. The third game, The Witcher 3: Wild Hunt, has been a massive hit with gaming fans worldwide, with overall sales at 33 million units. A Netflix series based on the books, starring Henry Cavill, is currently in the works.

“The Witcher: Of Flesh and Flame” #1 will hit stores December 19.