Eric Heisserer, the Oscar nominated screenwriter of Arrival, will be penning a four-issue mini series for Valiant titled, “Secret Weapons.” Heisserer will be joined by Valiant regulars Raul Allen and Patricia Martin on art. Valiant will continue it’s trend of providing more inclusive stories by having an African American female in the lead role. 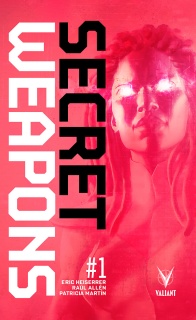 The series will center around Livewire, a character from the “Harbinger” series. Livewire is a “psiot,” Valiant’s name for the super powered beings in their universe, and can manipulate the electromagnetic field. The series will follow her as she discovers other psiots that her megalomaniacal tutor, Toyo Harada, has stowed away in an isolated facility for having less than desirable powers. According to Heisserer, the story is in part inspired by the Island of Misfit Toys in Rudolph the Red-Nosed Reindeer. Talking about conceptualizing the story, Heisserer said, “I started building this home for these wayward psiots that obviously didn’t make the cut. It seemed appropriate for where Valiant is right now.”

Heisserer came into the Valiant universe by being hired to write screenplays for the under development films based on the Bloodshot and Harbinger characters. He gravitated toward the Livewire character, “I started to have dreams about interesting scenes and interesting explorations of her powers long after my official writing steps were done on the script.”

Even though the story takes place in the main Valiant universe, Heisserer reassures readers that they won’t need to know all of Valiant’s recent history, “We’ll spoon-feed what you need.”

“Secret Weapons” will debut in June. Character designs and preview pages can be seen over at Vulture.