Today, Valiant Comics hosted their Valiant Summit 2016 from the UCB East Theater in New York City. It was here they announced their “Future of Valiant” lineup to take us all the way through 2016, including seven new titles (three ongoings, four mini-series). We’re going to go through each one of them and -since I’m kind of Multiversity’s Valiant guy- give my own thoughts on some very interesting looking books. 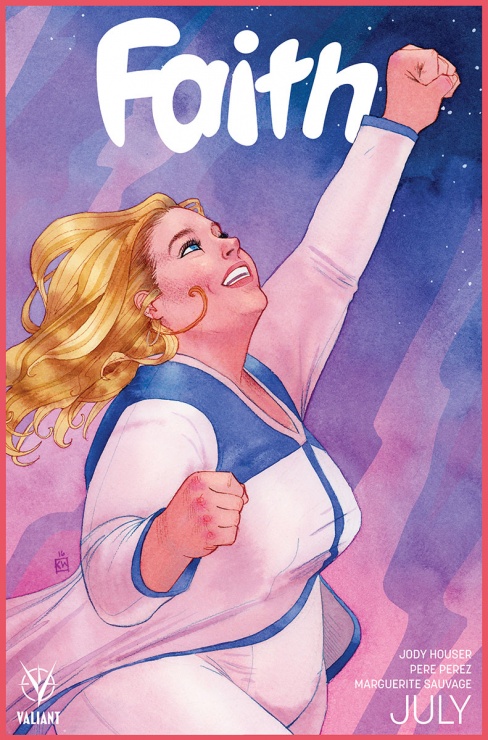 AN ALL-NEW ONGOING SERIES! The high-flying hero that captured the imagination of the world is back with a colossal new comics milestone!

In a city under siege by robots, aliens, monsters and even worse… celebrities, there is only one woman the people of Los Angeles can count on: the stratospheric superhero called Faith! Aspiring reporter by day and dedicated crime-fighter by night, Faith has tackled every obstacle in her path with confidence – like those crushing deadlines at work, the long-distance boyfriend half a world away, and the missing back issues that plague her comics collection! But, unbeknownst to her, Faith is about to collide with the one force she never saw coming: an up-and-coming super-villain bent on snuffing her out once and for all! But who is lurking behind the mask of her new foe…and could they just be the one person capable of rendering Faith powerless?

Jump on board now to find out why Valiant’s one-of-a-kind hero is inspiring a whole new generation! Be here as FAITH moves from her sold-out mini-series…and into the history-making debut of her first-ever ongoing series!

Thoughts: This is probably the one I have the least thoughts on. Not because it’s bad or because I won’t buy it, but because we knew this one was coming. The “Faith” mini-series was so huge and record breaking it was inevitable that it would be upgraded to an ongoing. Some will grumble that they should’ve just made this “Faith #5” but, frankly, I don’t care what those people think. The mini-series was great and the little tidbits Houser gave, including introducing Faith’s first supervillain, got me ready to go for this. 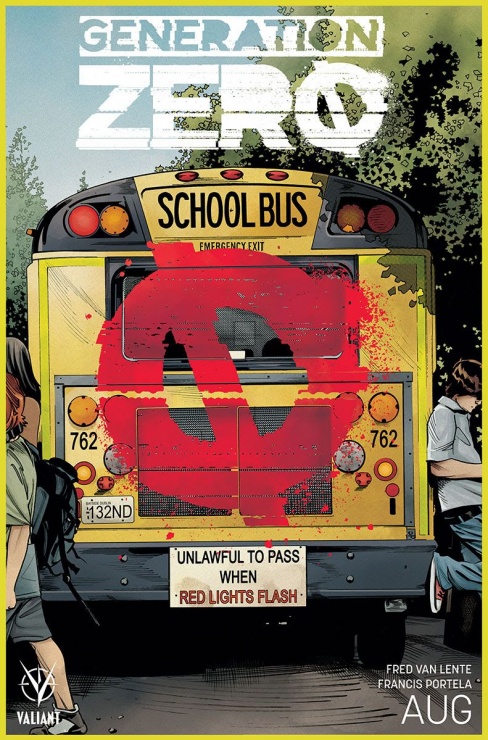 If you have a problem… If your parents won’t help… And if your cause is worthy… Log onto network #ZERO…because Generation Zero is listening.

Years ago, the children of the experimental strike team known as Generation Zero were taken from their families by Project Rising Spirit, a private weapons contractor, and raised to be psychic soldiers. After years of taking orders, they have fought for and won their freedom. Now, the world’s most wanted teenagers have pledged to protect each other tooth and claw, while using their extraordinary abilities to right wrongs for a generation without a future… To fight for kids, just like them.

One of those kids is Keisha Sherman, whose boyfriend just turned up dead after a suspicious car crash in Rook, Michigan – a newly booming tech town that sprang from rags to super-riches seemingly overnight. When Keisha makes a desperate plea into her webcam, the local high school suddenly finds itself with several unusual new students… But as word of Generation Zero’s presence spreads rapidly through the halls, this volatile band of teenage upstarts is about to discover that they’re far from the most extraordinary thing lurking behind Rook’s stainless-steel facade..

Thoughts: Okay, I’ll be totally honest with my bias here: The other six announcements could’ve been absolute crap and I wouldn’t have cared because this got announced. Generation Zero is one of my favorite things in the Valiant Universe and I had been so desperate to see these Murder Kids get an ongoing (as colleague Jessica Camacho could attest to my gasp when this was announced) and having it under the custodianship of the creators that did the excellent “Ivar, Timewalker” series. Wasn’t my first choice to helm this book, but I am so looking forward to it. 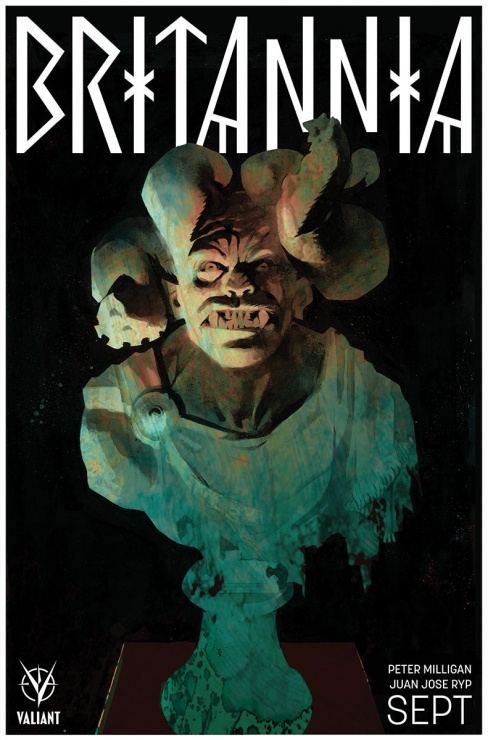 On the fringes of civilization, the world’s first detective is about to make an unholy discovery…

Ruled by the Fates. Manipulated by the Gods. Commanded by Caesar. In the year 65 A.D., one’s destiny was not his own. At the height of Nero’s reign, a veteran of Rome’s imperial war machine has been dispatched to the farthest reaches of the colonies to investigate unnatural happenings… In the remote outpost of Britannia, Antonius Axia – the First Detective – will become Rome’s only hope to reassert control over the empire’s most barbaric frontier…and keep the monsters that bridge the line between myth and mystery at bay…

Thoughts: This one is…intriguing. Listening to Chief Creative Officer Dinesh Shamdasani talk about this book -in that it’s about a centurion who learns the first basics of our modern day psychology- and how it will bend the barriers of tones that Valiant has gone for definitely has me interested in this book. I will admit: I have not been quite hot on Peter Milligan’s Valiant work. This is one that I’ll need to look at the first issue to get a feeling for. 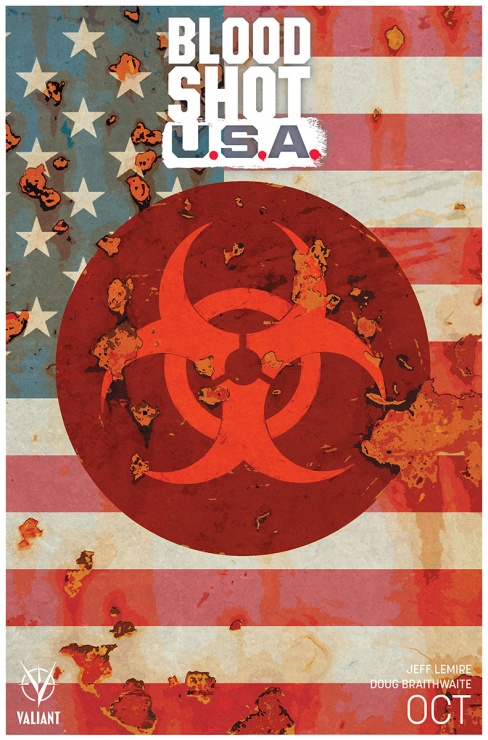 In Bloodshot we trust!

Project Rising Spirit – America’s greatest exporter of classified weapons technology – has achieved a breakthrough: a contagious, airborne nanite dispersion prototype that can turn the population of any city into an army of indestructible soldiers. A doomsday virus capable of destroying an enemy nation from the inside out. A machine-made pathogen that can completely rewrite human physiology…and hardcode every man, woman, and child with the same cutting-edge technology that created their greatest weapon: Bloodshot.

But now…Project Rising Spirit’s top-secret contagion has been released onto the streets of America’s greatest metropolis: New York City. As mayhem engulfs Manhattan, Bloodshot must lead the most dangerous invasion ever waged on American soil and keep a runaway pandemic from toppling armies and governments…and threatening to destroy humanity itself.

Thoughts: Lemire’s work on Bloodshot has kind of finally started getting me to like the character and this culmination of multiple years of work looks pretty badass. I mean, PRS infecting New York City with nanities in a vie for power just kinda shows they’re the Umbrella Corporation, but you have my attention and combined with Braithwaite on art, I’m curious. 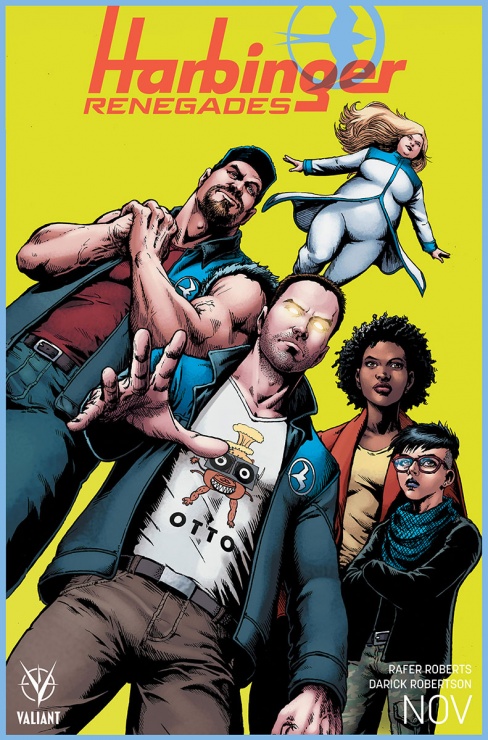 Anyone you know could become a psionically powered “harbinger” with the potential to reshape the course of human history. Your neighbor. Your boss. Your best friend. Your kids.

Six months ago, a secret team of renegade whistleblowers leaked the existence of these extraordinarily dangerous individuals to a stunned world. Today, all across the country, crude, DIY psiot activation attempts have left hundreds brain damaged…or worse. The emergence of a new psiot in a community often leads to riots and mass violence. Gun sales are through the roof.

America is terrified of what could happen next.

With this revolutionary upheaval now in motion, Kris Hathaway, John “Torque” Torkelson, Faith “Zephyr” Herbert, and Peter Stanchek are about to discover their calling. Together, the HARBINGER RENEGADES are moving from town to town, building their ranks, and subverting authority one mind at a time…and setting out to prove once and for all that behind their power, there has always been a purpose.

This November, the most fearless superteam in comics is going underground for AN ALL-NEW ONGOING SERIES from rising star Rafer Roberts (A&A: THE ADVENTURES OF ARCHER & ARMSTRONG) and superstar artist Darick Robertson (Happy!, The Boys)!

Thoughts: Seeing a new writer take up the pen after one so defined these characters is always awkward for me, but Roberts at the panel said a few things to give me confidence. 1. He confirmed that Kris Hathaway is indeed a queer woman and that her relationship with her girlfriend Tamara is going to be one of the more integral parts of the book. As a Bi dude and someone who’s criticized Valiant for a real lack in LGBQT department, this is nice. Want more though. 2. He described Peter Stanchek as “Jack Kirby’s Trainspotting” which… yes. and 3. He talked about a new villain, Mind, who is essentially “Dr. House if he could shoot lasers from his hands”. Can you criticize that last one? 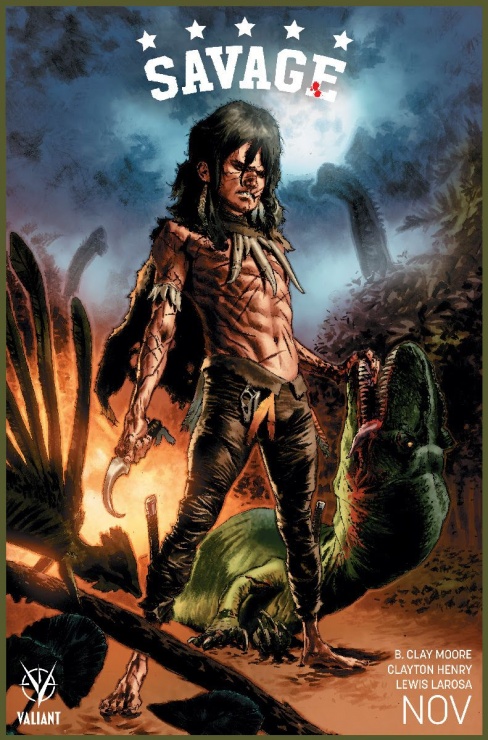 Fifteen years ago, the world’s most famous soccer star and his former supermodel wife – pregnant with their unborn child – disappeared without a trace. The world believes they are dead… But, in reality, their private jet crash-landed on a mysterious, unknown island ruled by by prehistoric creatures from another time…

This is the story of how they lost their humanity.

Thoughts: Kind of like “Britannia” this is intriguing. This is probably the one I’m least sold on out of all these. It could be an interesting look at the breakdown of human psychology, but I won’t lie, this could have some serious problematic connotations (even that name “Savage” has some really heavy baggage). This is a very very very hesitant “wait and see”. 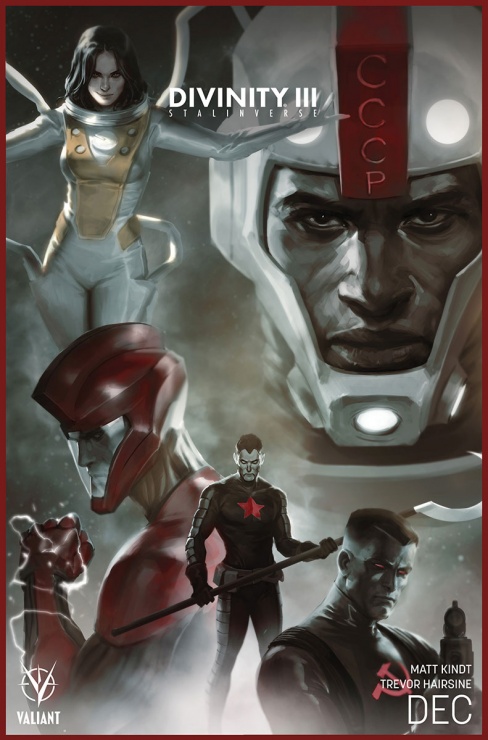 Earth has a new god. The world you know is gone. Welcome to the Stalinverse, comrade.

Thoughts: This is such a goofy idea. No, seriously, it is insane as hell. Definitely was the one that surprised the most people at the event (think most of us were expecting a Shadowman ongoing, more on that later), but one that looks so crazy it may be an insane amount of fun. Me and Jessica kept going on and on about “Soviet Shadowman”. “Divinity” was great, “Divinity II: Divine Harder” had a real strong opener, I’m willing to along with “Divinity III: This Time the Commies Mean Business”.

Final Thoughts: Perhaps the big one -and this is important- is that, while Valiant is taking strides in creating diversity in their world, I would however like to see more of it in the creative department. Now, I dig most of these creators, but I can’t deny that I would like to see other perspectives. And as I said before, no Shadowman book, despite the FCBD teaser.

A lack of a Josh Dysart book (yeah, I just railed about the lack of creative team diversity, but hey, Dysart’s my favorite writer at Valiant) was disappointing, although, Shamdasani did hint to me after the panel that: it’s no coincidence that the big guns like X-O and Harada were strangely absent from these announcements and that Dysart is working on something for Valaint after “Imperium” ends. That’s a tease for 2017.

I will also say -and Brian Salvatore brought this up- I really do wish they had some of the artists on the panel too. We had Kindt, Houser, Van Lente and Roberts on the panel, but I do wish we could hear from the artistic minds and this just continues to perpetuate that only writers are important. I’ll give them points for including artists names, unlike some places, Vulture.

There was something Shamdasani said at the panel that kept with me: “We tell stories about superheroes, not superhero stories”. And that is still very true: the closest thing to atypical superhero story here would probably be “Faith” and even that has some big differences. I do appreciate the mass amount of genre diversity that they continue to excel at. Even the ones I am more skeptical of I am at the very least interested in. More importantly, it got James Johnston (another Multiversity colleague that joined us and is graduating college tomorrow so congratulate him), a very casual Valiant reader, interested in the whole line up.

It looks like a kick-ass year and I’m looking forward to reading them.