Over at the The Hollywood Reporter, Valiant Comics has announced the “The Visitor,” a five-issue series written by former president of DC Comics Paul Levitz (“Legion of Super-Heroes”) and illustrated by Russ Manning Award-nominated artist M.J. Kim (“Faith: Dreamside”). Not to be confused with a 1995 Valiant character of the same name, the series will revolve around a new character created by Paul Levitz, “one with a deadly mission that could change the future — and destroy part of New York City in the process.” 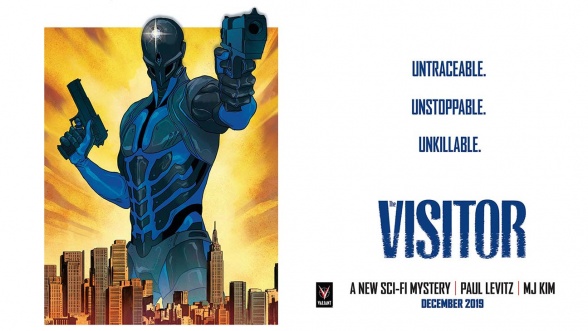 The series will unfold during UN Week, or the UN General Assembly, for those not native to New York City. According to Paul Levitz, who has lived in New York all his life, “In and of itself, it’s a very specific mystery story, hopefully with some emotional resonance for the characters as they’re going on, hopefully, some interesting setups as we explore New York,” he told THR.

Levitz further broke down the upcoming series, saying “’The Visitor’ isn’t tied to the Valiant Universe in any of the same ways that the original ‘Visitor’ series was. It does have a tie, that you really don’t need to know in order to enjoy the series. But there are some Easter eggs hidden in it. And ultimately the thing does connect back into the broader universe.”

“The Visitor” #1 will be released in December of this year. For the full interview announcing the series and early artwork, please visit The Hollywood Reporter. For more information on Paul Levitz, check out his website. For M.J. Kim, check out her website.

From Puerto Rico now in Brooklyn. I'm bilingual, a gamer, a redditor, and obviously, a comic book guy!