Today, Dynamite Entertainment announced a new ongoing “Vengeance of Vampirella” series from writer Tom Sniegoski. The series picks up where Sniegoski left off with the character back in 1996 after the finale of his “Vampirella: Death & Destruction” limited series. Joined by rising artist Michael Sta. Maria, “Vengeance of Vampirella” will release in October in perfect time for Halloween. 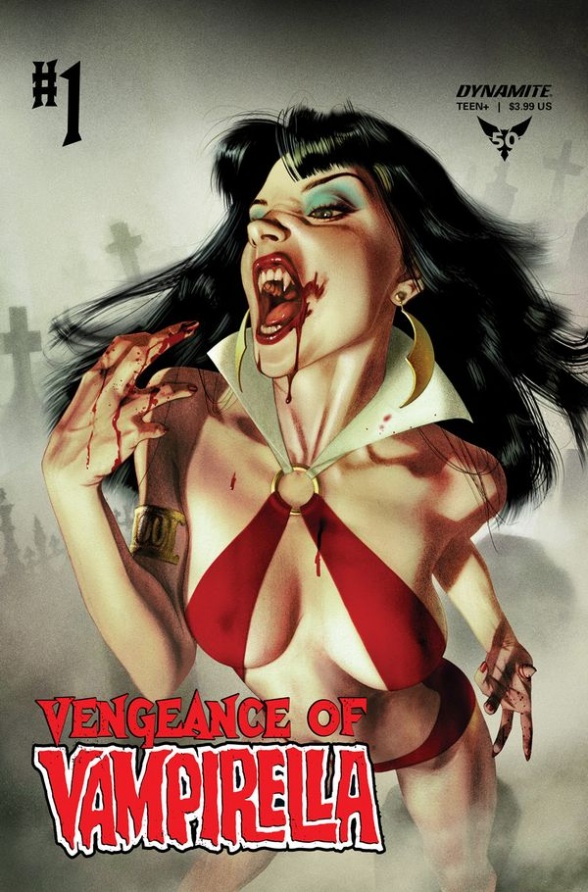 “If somebody had told me just a few years ago that I’d be able to come back to a character I have great affection for, and pick up with her exactly where I left off 25 years ago, I would’ve said that it would never happen,” said Sniegoski. “But here I am, smack dab in the horrific, apocalyptic world that I set up for Vampirella and never got to play in.”

Sniegoski’s tale will detail how Vampirella’s martyrdom has achieved a mythic status among those humans left in the ruins of a post-apocalyptic Earth as they attempt to resurrect their fallen hero.

With a new, Christopher Priest-written Vampirella ongoing debuting this week, Dynamite is offering fans, both old and new, interesting places to encounter the Daughter of Draukon.

Swooping in on bat wings in time for Halloween, this series is quite special. Prolific Vampirella writer Tom Sniegoski (Punisher, Angel) returns once more to the Daughter of Drakulon – and picks up exactly where he left off in 1996! Sniegoski is joined by hot new artist Michael Sta. Maria (Fathom, Jirni).

“If somebody had told me just a few years ago that I’d be able to come back to a character I have great affection for, and pick up with her exactly where I left off 25 years ago, I would’ve said that it would never happen,” said writer Tom Sniegoski. “But here I am, smack dab in the horrific, apocalyptic world that I set up for Vampirella and never got to play in. And I haven’t heard the word ‘NO’ yet, no matter how insane the idea. Just wait until you see Michael Sta. Maria’s art, peoples’ new favorite Vampirella artist is about to be unleashed! Can you tell I’m excited?”

The original Vengeance of Vampirella series made a huge splash in 1994 with a jaw-dropping wraparound cover by Joe Quesada and Jimmy Palmiotti, depicting Vampi bathing in blood represented by swaths of red foil. Vampirella lead the pack in the “bad girl” craze and consistently placed in Wizard Magazine’s coveted top 10 lists for characters and hot titles.

For two and a half years, Sniegoski wrote almost all original Vampirella stories across the flagship series, spinoffs and crossovers. His epic run concluded with the Death & Destruction limited series co-written by Christopher Golden and featuring a breakout performance by artist Amanda Conner. Vampi went through her own epic deconstructive storyline in the 90’s, similar to titans of the industry Superman, Batman and Spider-Man. Spoilers – she gets fatally impaled by Mistress Nyx’s trident at the end! Though Warren Ellis and Conner jumped in with the follow up Vampirella Lives series, there was an epic finality to Death & Destruction that closed out the Sniegoski era. Until now…

This October’s Vengeance of Vampirella picks up from that finale, but 25 years later. With Earth’s protector against the supernatural felled, humanity lives in ruins, subjugated by monstrosities ruled by Nyx and her Chaos Lords. Vampirella’s martyrdom has achieved mythic status among the bands of rebels on the outskirts of society. Everything takes a turn when some think they may be able to resurrect their savior. But she doesn’t come back all there at first… All readers will feel at home in this series – both longtime fans and newcomers who have recently joined with the massively successfuly flagship series by Christopher Priest.

To celebrate this special treat Dynamite has assembled their own Danse Macabre of beloved cover artists. Joshua Middleton (Aquaman, Martian Manhunter) leads the crew with his first ever cover for Dynamite! Perfectly complementing his gorgeous wraparound cover for Vampirella #1, Frank Cho (Harley Quinn, Red Sonja) contributes a cover incorporating his acclaimed ballpoint pen techniques and peerless cheesecake skills. Fellow superstars Ben Oliver (American Carnage) and Lucio Parrillo (Red Sonja Birth of the She-Devil) have painted covers as well. While Joanie Brosas, one of the most popular Vampirella cosplayers, steps in front of the camera for a cover.

Classic Vampi artist Buzz is also returning with a limited edition incentive cover, and shared this, “I’m as excited now as I was 25 years ago when my artwork helped relaunch Vampirella and forever attached me to this badass girl from Drakulon. It’s almost kismet that I’ve been invited to celebrate her 50th as I turn 50. We’re both back..with a VENGEANCE!”

“I’m very happy to be part of this book since I’m a huge fan of Vampirella!,” said artist Michael Sta. Maria. “My career truly started the day I met Stephen Segovia – who has drawn Vampirella as well. Today he is my mentor, a good friend and a constant inspiration. I hope fans love my Vampi!”

“I could not be happier for Tom to return to Vampirella after all these years. And Tom returns with “a vengeance!”. Seriously though, Tom continues to grow as a writer, and this series is just incredible as you’ll see to how much he adds to the Vampirella mythos!,” said Dynamite CEO and Publisher Nick Barrucci. “And wait until you see Michael Sta. Maria’s art – just beautiful!”

Vengeance of Vampirella #1 and the Vengeance of Vampirella (1994) #1 Replica Edition will be solicited in Diamond Comic Distributors’ August 2019 Previews catalog, the premier source of merchandise for the comic book specialty market, and slated for release in October 2019. Comic book fans are encouraged to preorder copies with their local comic book retailers. It will also be available for individual customer purchase through digital platforms courtesy of Comixology, Kindle, iBooks, Google Play, Dynamite Digital, ComicsPlus, and more!