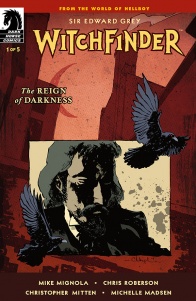 The five-issue miniseries will see Sir Edward Grey investigating the murders by Jack the Ripper. Grey believes that there is a supernatural force involved with the murders, which puts him at odds with the investigators of Scotland Yard, leading him to work alongside Sara Jewell, an American occult investigator – their partnership will be tested by the growing conspiracy that the truth is being covered up.

While it has been “long-established” that Grey was involved with the Ripper Killings in 1888, and that his role in the government ended shortly after, it is only with this series that the specifics of Grey’s involvement will be revealed. In an interview with The Hollywood Reporter, Roberson teased that the identity of the person “behind the Ripper murders in the world of Hellboy,” as well as “what happened that caused the royal Witchfinder to [have] a falling out with Queen Victoria,” would be revealed in the series. Mitten described how he is able to play around with the “the styles and the architecture, the mood of time and place” through the “Mignolaverse lens,” and promised that some of the “wonderful set pieces from Victorian London” will be revisited with some new ones being found too.

“Sir Edward Grey, Witchfinder: The Reign of Darkness” #1 is scheduled for release on November 27.