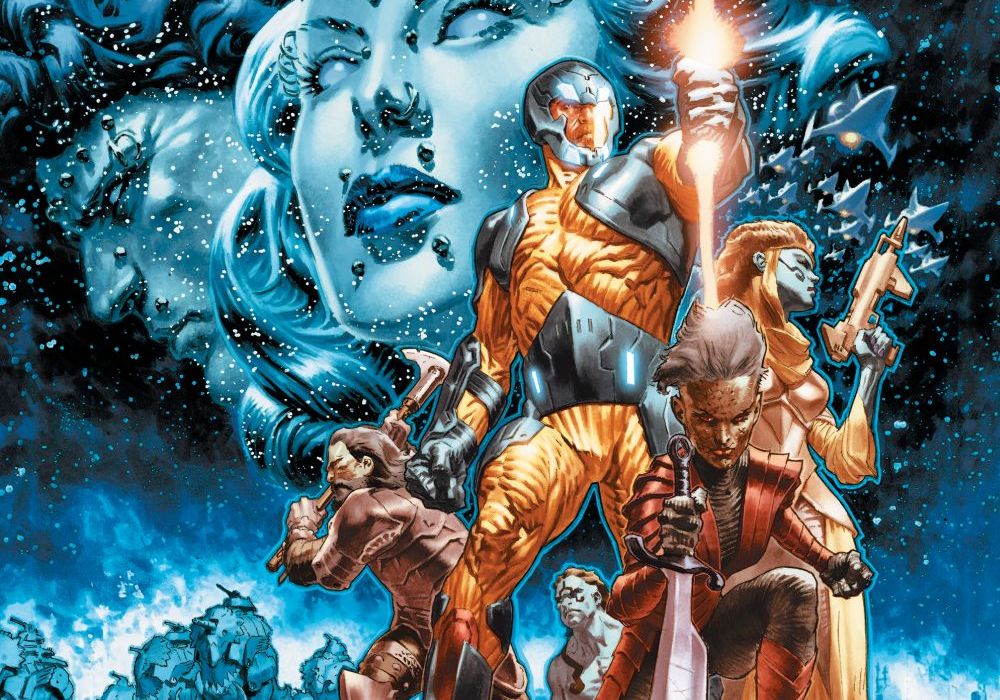 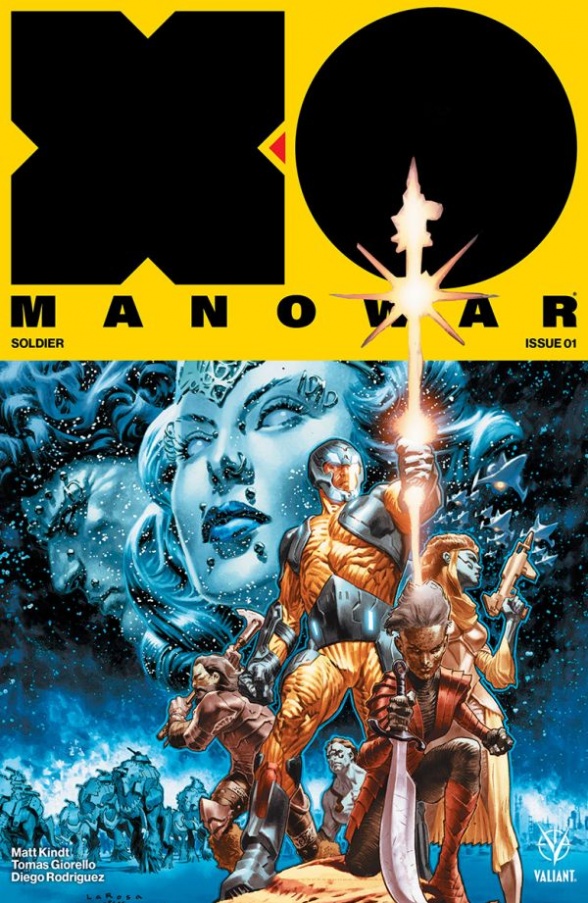 Earlier this year, “X-O Manowar” wrapped up with #50, ending Robert Venditti’s long run on the character. We knew that X-O wouldn’t be without a title for too long, and now we have the answer as to when he will return: March.

Matt Kindt, one of the few writers in comics who can slip back and forth between superheroes and more introspective, indie work with equal success, will be taking the reigns of the series, alongside a team of artists, all of whom will take one arc/issue before passing the baton to the next. The series will begin with a three-issue arc from Tomas Giorello, before Doug Braithwaite, Clayton Crain, and Mico Suayan all take three issue turns on the book, with a one-issue interlude by Ryan Bodenheim between Crain and Suayan.

Aside from Bodenheim, all of the artists have done work for Valiant in the recent past, and this looks a bit like the Valiant All-Star team stepping up to make the return of “X-O” feel significant.

Keep reading below for the full press release, as well as some preview pages from the first issue, and be on the lookout for an interview with Matt Kindt in the next few weeks, discussing “X-O Manowar” and more. 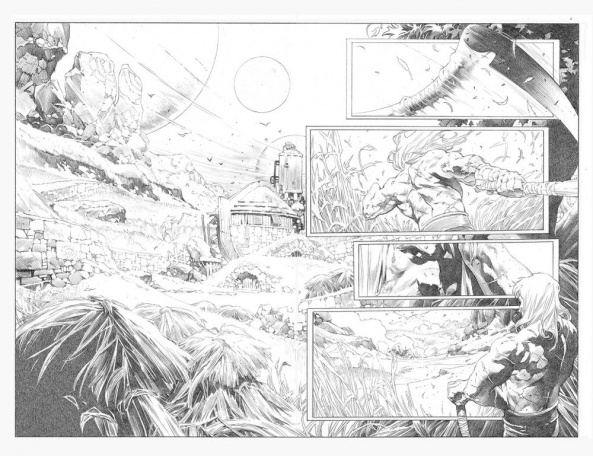 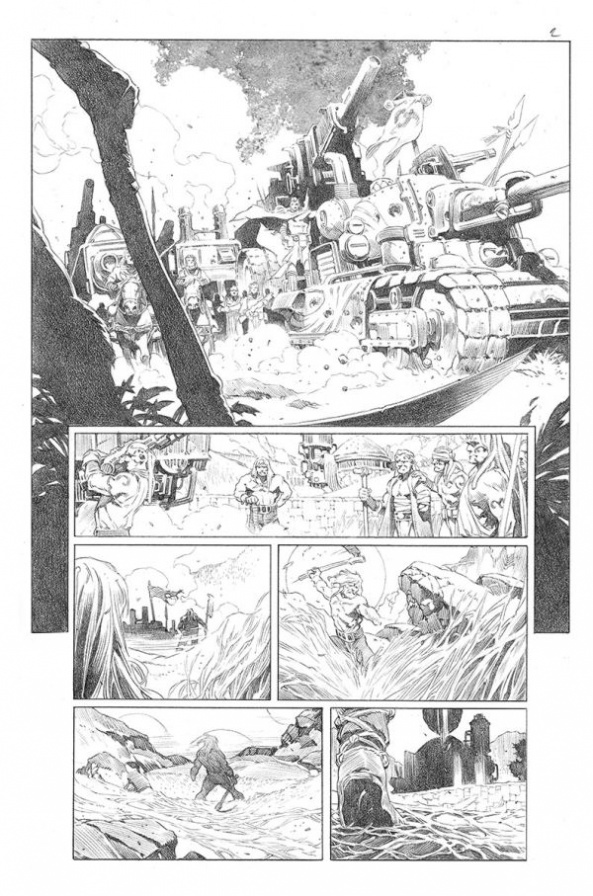 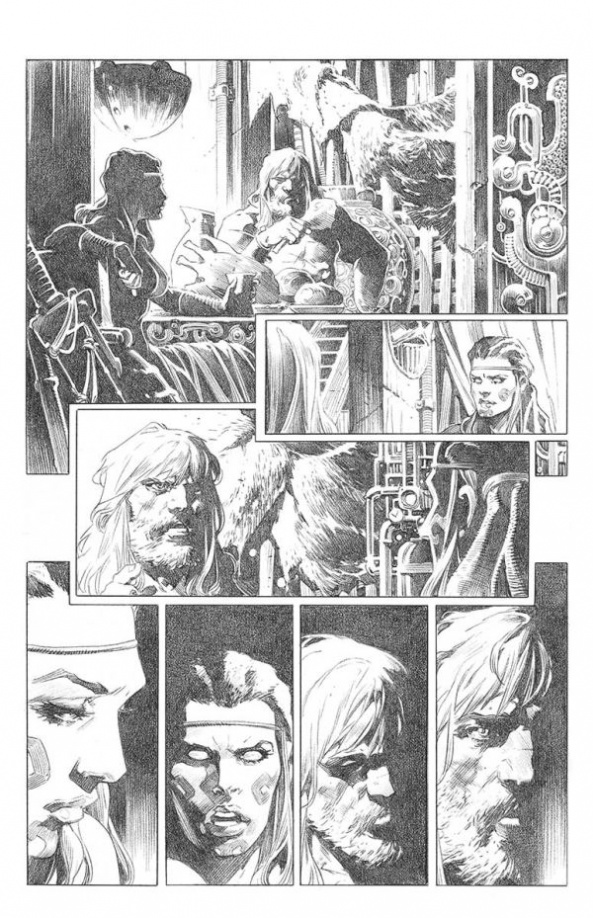 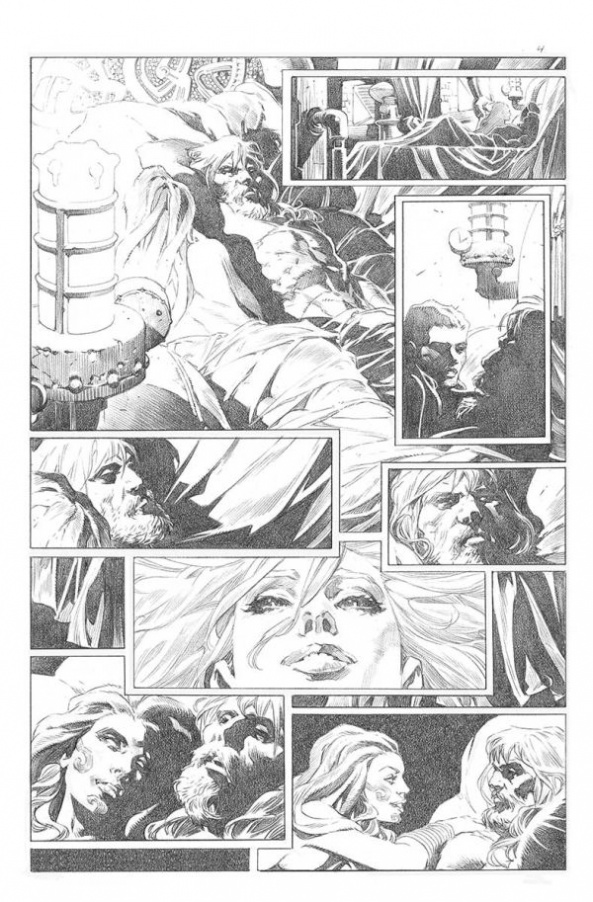 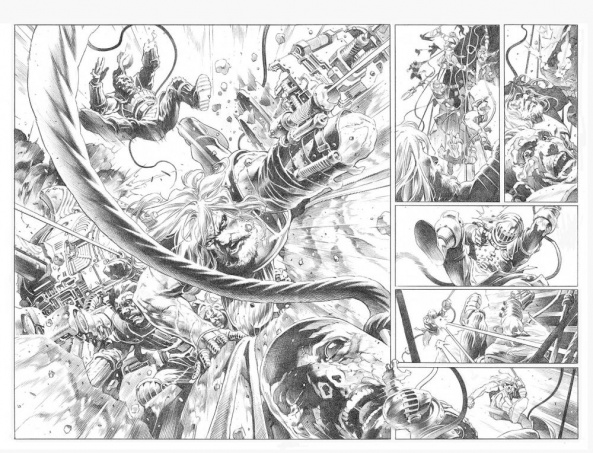 A stunning new beginning for Valiant’s most enduring icon starts here on March 22nd, 2017 with part one of “SOLDIER” – a punishing, three-issue introduction that will push Aric of Dacia beyond the farthest limits of our galaxy…and into the brutal opening salvo of the ultimate X-O Manowar tale ever told!

Born under the oppressive thumb of the Roman Empire, Aric of Dacia learned warfare at an early age. It was amid such violence that he was abducted by an alien race. Forced into slavery, he survived where others perished. His escape would come from bonding with a weapon of immeasurable power: the X-O Manowar armor. With it, he returned to Earth…only to find himself stranded in the modern day.

But that was a lifetime ago.

Now, far from home on a strange and primitive new world, Aric has begun a new life. Liberated from his past, he tends to his crops. Free from war. Free from violence. Free from the armor.

But the machinery of death marches his way once again. Conscripted into an alien army and thrown into an unforgiving conflict, the fury inside him finds voice as he is forced to embrace the armor once more. With it, he will decimate armies, topple empires and incite interplanetary warfare as he rises from SOLDIER to GENERAL to EMPEROR to VISIGOTH. They wanted a weapon. He will give them war!

“Matt Kindt is a genius-level creator and, with X-O MANOWAR, he’s tapping into the essential core of our most iconic character to deliver something more ambitious, more far-reaching, and more fantastic than anything Valiant has ever attempted before,” said Valiant Editor-in-Chief Warren Simons. “This year marks X-O Manowar’s 25th anniversary, but, instead of falling back into nostalgia, we’re taking Aric into uncharted territory – with five of comics’ greatest artistic talents at the helm, no less. This is a premier team that has some truly stunning turns in store – and, when X-O Manowar emerges on the other side, he will be looking at a very different and much larger Valiant Universe.”

In the wake of “SOLDIER”’s staggering assault in issues #1-3, X-O MANOWAR then continues in 2017 and beyond as a superstar cast of Valiant’s most acclaimed artistic talents chart Aric’s path from SOLDIER to GENERAL to EMPEROR to VISIGOTH for a vicious, year-long journey of bone and bloodshed born from the battlefields of a herculean alien empire:

“X-O MANOWAR #1 is not just the biggest book Valiant will be publishing in 2017; it might just be the biggest book we’ve ever published, period,” said Valiant CEO & Chief Creative Officer Dinesh Shamdasani. “With five sets of creators working concurrently across more than a year’s worth of the series, we’re building what will be the bedrock for Valiant’s next phase. But we’re not content to rest there. Over the coming weeks, we’ll be unveiling a simply massive slate of surprises that are going to add extra fuel to X-O MANOWAR’s fire in comics, video games, and even film. 2017 will be the year of X-O MANOWAR not just for Valiant, but for the entire comics industry.”

Since debuting in 1992, X-O Manowar has endured as one of the best-selling and most popular comic book creations of the past 25 years with almost 10 million comics sold and contributions from a seminal roster of creative luminaries including current Marvel Chief Creative Officer Joe Quesada (Amazing Spider-Man, Daredevil), former Marvel Editor-in-Chief Jim Shooter (Avengers), and comics legends Barry Windsor-Smith (Conan the Barbarian, Uncanny X-Men) and Bob Layton (Iron Man). After returning to the forefront of Valiant’s publishing line with a chart-topping, multiple sold-out series by New York Times best-selling writer Robert Venditti (Green Lantern, The Flash) and Eisner Award winner Cary Nord (Conan, Star Wars) in 2012, X-O Manowar anchored the resurgence of the Valiant Universe and went onto become one of the best-selling and longest running superhero series of the modern era, earning a multitude of awards and critical accolades from the industry’s most prestigious outlets in the process.