At C2E2 today, writers Jonathan Hickman (“House of X,” “Powers of X,” “X-Men”), Tini Howard (“Excalibur”), Benjamin Percy (“X-Force,” “Wolverine”), Gerry Duggan (“Marauders,” “Cable”), Vita Ayala (“Children of the Atom”), Leah Williams (“X-Factor”), and editors Jordan D. White and C.B Cebulski took to the stage to announce a new 15-part crossover comic, ‘X of Swords’ (pronounced ten of swords, like the tarot card), which will unite the various X-series in one long saga that will push Krakoa to the brink. 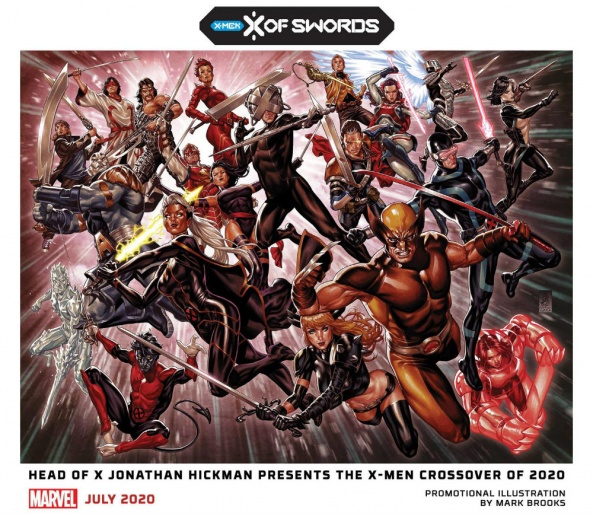 “Threatened by powerful forces from the unknown, ten mutants will rise up to defend their home,” reads the promo text. “Arming themselves with legendary blades both new and familiar, mutantkind will finally meet its mystical destiny.” In terms of “powerful forces from the unknown,” the X-Men aren’t exactly lacking in shadowy enemy organisations, but the most likely suspect would be the armies of Otherworld, who have regularly appeared in Tini Howard and Marcus To’s “Excalibur” (the most sword themed of all the X-books), and have been teased further in Hickman and Yu’s “X-Men.”

The promo art by Mark Brooks has twenty sword-wielding mutants on the cover, although many are simply armed with extensions of their own powers, as is the case with Cypher, Iceman, Storm, Armor, Cyclops and Captain Britain (although she’s a special case). There are a few recognisable weapons however: Xavier has the Cerebro Sword from “X-Force,” Wolverine has the Muramasa Blade (the only sword capable of killing him), and Cable has his sword from the promo art for his new series. Apocalypse is wielding a different sword from the one used during the Crucible in “X-Men” #7, and Magik, quite notably, has a different blade from her usual Soulsword. What does this all mean? Possibly nothing! But maybe there’s a few tidbits you can pick out amongst it all.

‘X of Swords’ will reportedly have Hickman and Howard writing the tentpole issues in the series, with Howard even coming up with the series’s name. Members of the panel also teased “a thing” in December. Look for ‘X of Swords’ in stores this July across all ‘Dawn of X’ titles.