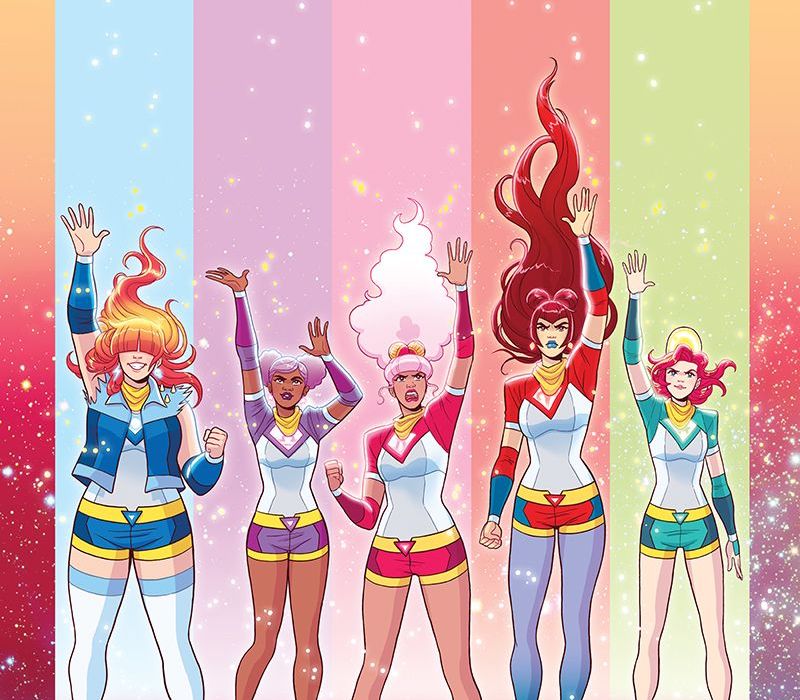 Two years ago, Dark Horse published “Zodiac Starforce: By the Power of Astra,” a four-issue miniseries from writer Kevin Panetta (“Bloom”) and artist Paulina Ganucheau (“Another Castle”). The series was a hit, spawning a very intense fan reaction. Well, those fans are going to be very happy, as we can exclusively announce “Zodiac Starforce: Cries of the Fire Prince,” a new four-issue sequel that starts in July.

Our Jess Camacho was a fan of the first series, and had a chance to talk to Panetaa and Ganucheau about the new mini.

“Zodiac Starforce: By the Power of Astra” was a really fun, magical girl tale for today’s reader. What were some inspirations going into this new miniseries?

Kevin Panetta: I took inspiration from SO MANY THINGS. The second mini-series explores the bigger world of Zodiac Starforce while still staying personal, which is something I love in shows like Avatar: The Last Airbender and Steven Universe. The villain is a little more over-the-top but still MEAN AS HECK and that is probably a little inspired by Glory from Buffy the Vampire Slayer. I think my weirdest inspiration is the first thirty-eight issues of “Amazing Spider-Man,” though. I always loved that Ditko and Lee aged Peter Parker in real times and that was something I wanted to do in ZS, too! So, this story starts almost a year after the first series and the girls are almost a year older!

Paulina Ganucheau: Visually. my inspiration lately has been a whole lot of Rumiko Takahashi! I’ve been on a huge Ranma ½ manga binge and her use of varied wardrobe, succinct comedy and action is exactly what I want to get across in this new series. I feel very close to these characters for this second go around so I really feel like I have the room to explore new things!

KP: Yeah, that’s a big thing for me, too. I feel so attached to the girls now. My biggest inspiration for the new Zodiac Starforce series is probably…Zodiac Starforce! 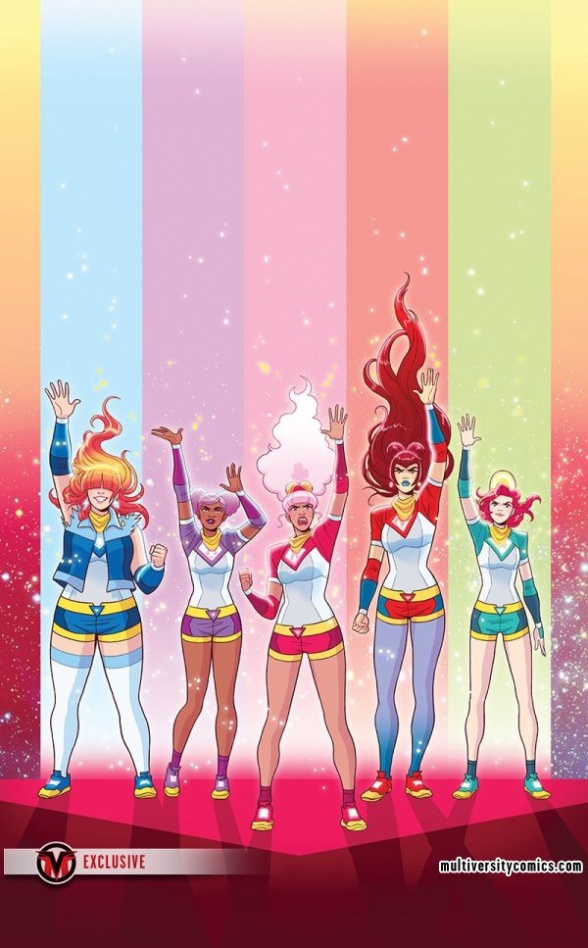 The first miniseries left the crew in a much better place than where they started. Where are they when this new miniseries begins?

KP: Well, they’re seniors now. Most of them are eighteen or about to be. So, while they’re all good as a team, they’re also trying to figure out what’s next for them in their normal lives. There are still some monsters and creatures that need whooping, but things have been mostly chill since the end of series one. Lily is learning her abilities, Emma has a problematic boyfriend, and Kim is thinking about a post-high-school career. Molly is really the only one that has everything figured out. But we all know Molly is a badass so that’s no surprise.

KP: If the team was five Mollys there would be nothing to write about.

PG: And would all look flippin fabulous 24/7.

KP: I have changed my mind. The fashion competition between all the Mollys could sustain a book by itself.

Zodiac Starforce had a short, four issue run but it resonated with readers. You got a lot of great fan art, tweets and reviews. What do you think it was about this story and these characters that appealed to so many readers?

PG: I think it was really easy for people to instantly see themselves as a part of this team! Readers love to feel involved in a book or piece of media and I think ZS really has the range for that creative thinking.

KP: The biggest question we get from fans is “When is Cancer showing up? Where is Scorpio, you jerks?!”. Everybody can find a sign or personality or look that they relate to. Oh, and by the way, we’ll DEFINITELY be seeing more signs represented in series two.

PG: I love that about Zodiac Starforce. We want to make a book for everyone and we’ll continue to do that as we expand the universe!

Paulina, your work was a real highlight for me as I read Zodiac Starforce. Could you talk about what we can expect to see in the new miniseries? Will we see some redesigns or even crazier action?

PG: First, thank you so much! Second, yes and yes to both! My style has evolved a loooot since the first series, so naturally it’s going to feel updated, but I definitely want to break the mold for most of the characters moving forward. New hairstyles, new outfits, new choices etc etc etc.

PG: Y’all aren’t even ready for the cute I’m gonna bring. And definitely crazier action. I’m more skilled as an artist now so I think I can pull more off! Also Kevin keeps writing me new visual challenges to conquer so I gotta crush them! (strong arm emoji)

KP: “New visual challenges” means I write forty characters on each page all fighting and kissing and driving cars at the same time because I am cruel.

PG: Cars are the devil, but I’m here for the kissing.

Finally, given that some time has passed between the release of the first miniseries and this new one, is this going to be easy to jump into if you haven’t had a chance to read Zodiac Starforce yet?

KP: I think so! The first miniseries wrapped up pretty cleanly, so series two is kind of it’s own thing. We’ve got a new villain, new characters, new locations, and a lot of other cool new stuff, too!

PG: We hit some familiar beats with this new story and some very unfamiliar beats so it’s very accessible while also being very fresh! I cannot wait for everyone to see where we’re heading with this series. These characters are so alive to me and seeing them evolve is such a huge part of what ZS is about.

KP: We’re both leaning into what we love about this book and the second series is going to be funnier, weirder, and more Zodiac Starforce than ever! 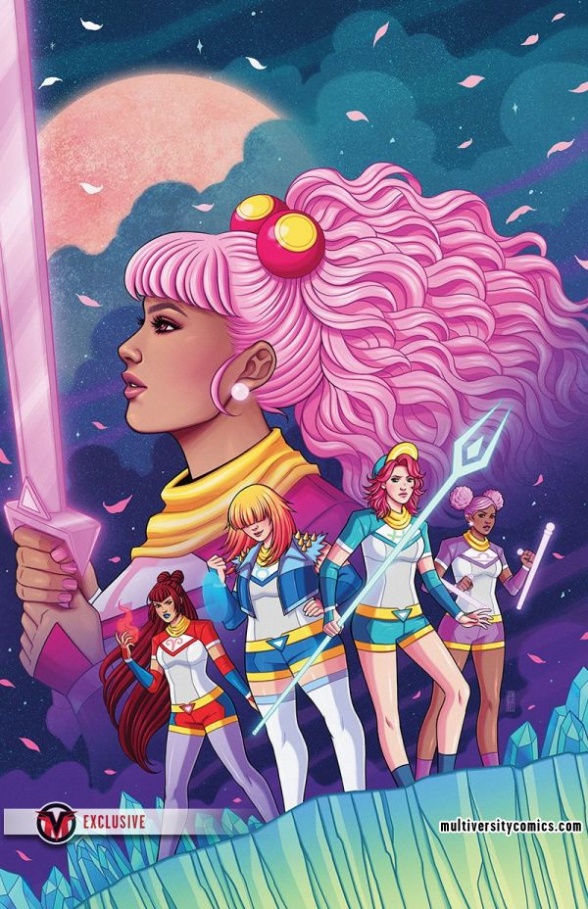 Read the full press release below, and look for the issue in your local comic shop or digitally this summer.

The Zodiac Starforce is an elite group of teenage girls with magical powers who have sworn to protect our planet against dark creatures. After defeating former Zodiac Starforce member Diana and her mean-girl minions, the girls thought they’d get a little break from protecting our world. Unfortunately, “Zodiac Starforce: Cries of the Fire Prince” finds our favorite magical teenage girls battling a new big bad!

The first issue of “Zodiac Starforce: Cries of the Fire Prince” (of four) goes on sale July 5, 2017.

Praise for Zodiac Starforce: By the Power of Astra:

“If you’re a fan of Gotham Academy, Giant Days, or The Runaways, I strongly recommend checking out this book.”—Comicosity

“Zodiac Starforce is a bright, brilliant debut issue of what promises to be an exciting new series. It’s lots of fun and smarter than one may expect. Well worth picking up.”—Major Spoilers

“This is a really fun story, but it’s not all rainbows and happy vibes—there’s plenty of action, dark threats, emotional tension, and monsters to balance out the cheery colors. Zodiac Starforce has a touch of everything, and it all blends together to create a truly exciting story.”—Comic Bastards

For more than thirty years, Dark Horse Comics has proven to be a solid example of how integrity and innovation can help broaden a unique storytelling medium and establish a small, homegrown company as an industry giant. Founded in 1986 by Mike Richardson, the company is known for the progressive and creator-friendly atmosphere it provides for writers and artists. In addition to publishing comics from top talent, such as Eric Powell, Mike Mignola, Geof Darrow, Brian Wood, Gail Simone, Stan Sakai, and Guillermo del Toro, and comics legends, such as Will Eisner, Milo Manara, Kazuo Koike, Neil Gaiman, and Frank Miller, Dark Horse has developed its own successful properties, such as The Mask, Ghost, X, and Barb Wire. Its successful line of comics, manga, and products based on popular properties includes Dragon Age, Buffy the Vampire Slayer, Aliens, Conan, Tomb Raider, Halo, The Witcher, Serenity, Game of Thrones, and Avatar: The Last Airbender. Today Dark Horse Comics is the largest independent comic book publisher in the US and is recognized as one of the world’s leading entertainment publishers.