Since coming over to BOOM! Studios, Joss Whedon’s projects have all thrived under new creative teams. Greg Pak and Dan McDaid are a really inspired pair for “Firefly.” McDaid’s time drawing Judge Dredd has allowed him ample time playing in a world that is futuristic but not overtly sci-fi at times, and he is able to really craft a book that both feels true to the source material, and full of new details. Pak is a master of dialogue, and he has nailed the cadence of Whedon’s television writing, without sacrificing his own style, either. We are thrilled to share an exclusive first look at the series’ 8th issue, due out on July 17th. 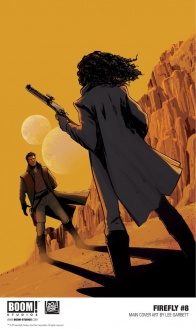 Mal and Zoe vs Boss Moon – and no one’s leaving without paying the price! But when the dust settles, will these bitter enemies discover an even greater threat?

Thanks to BOOM! for the preview, and make sure to pick up the book in 2 weeks! 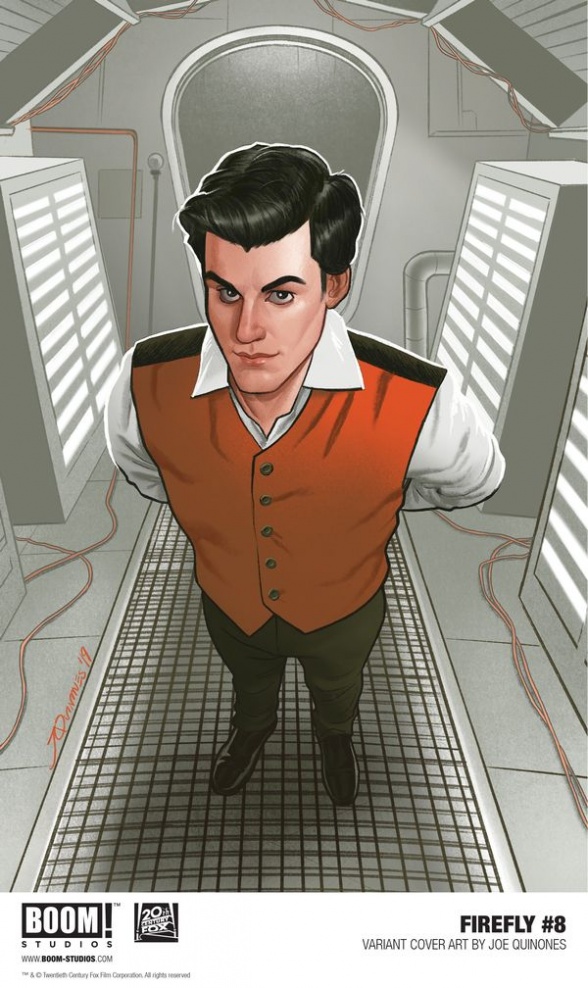 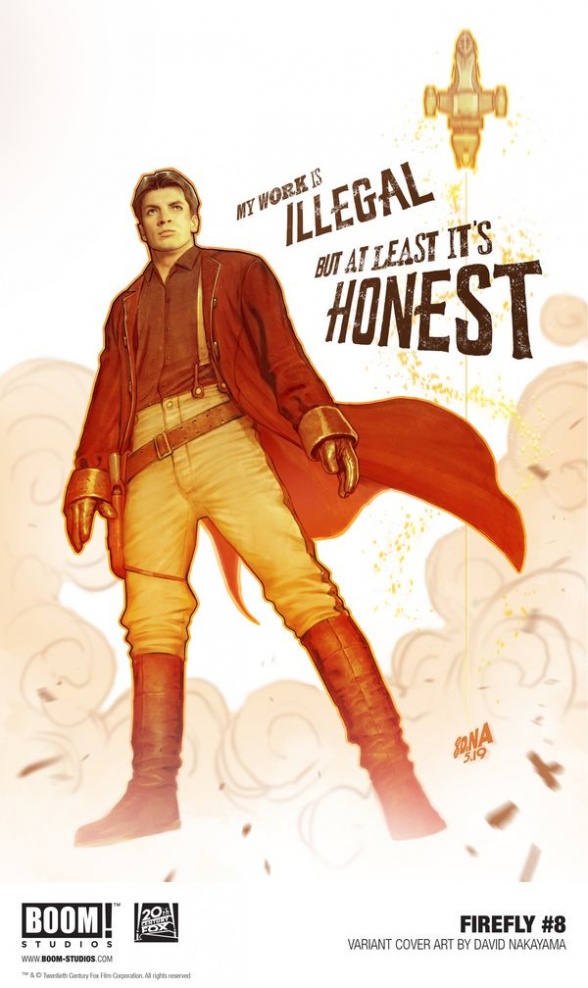 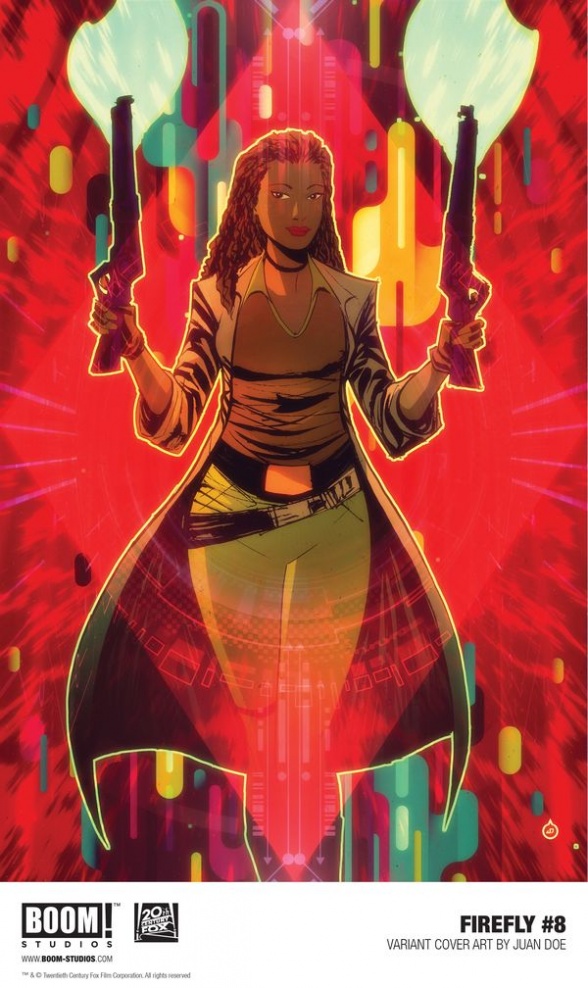 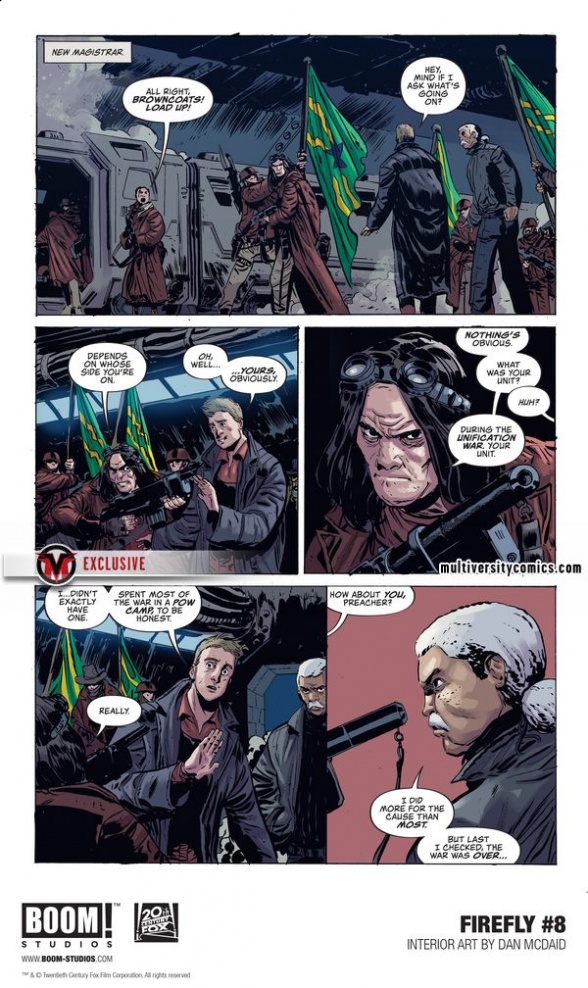 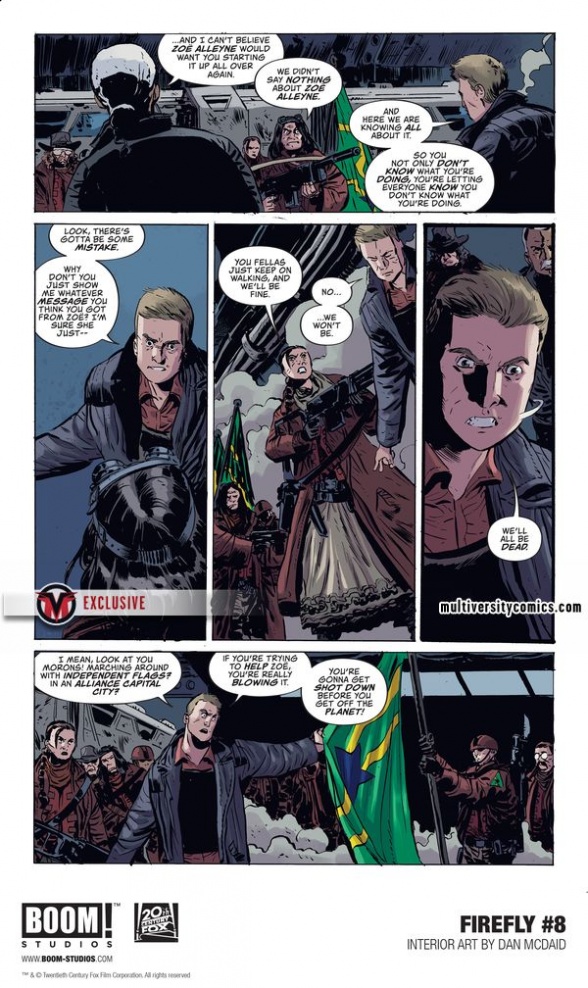 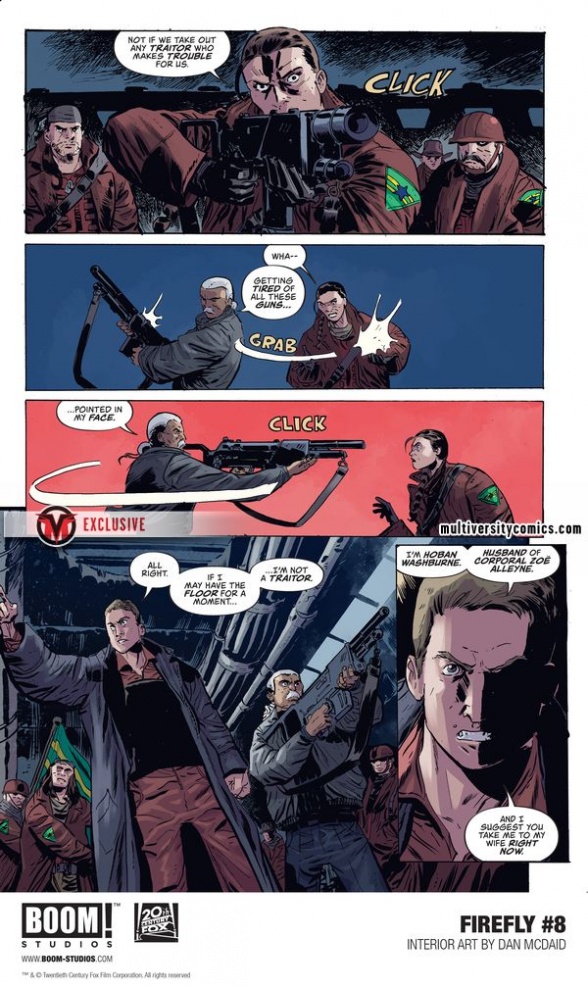 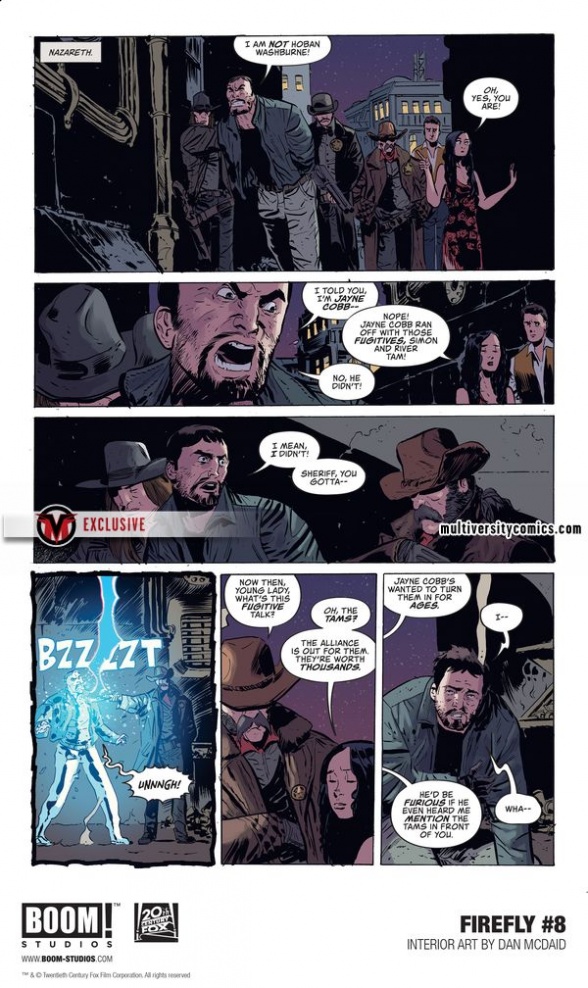 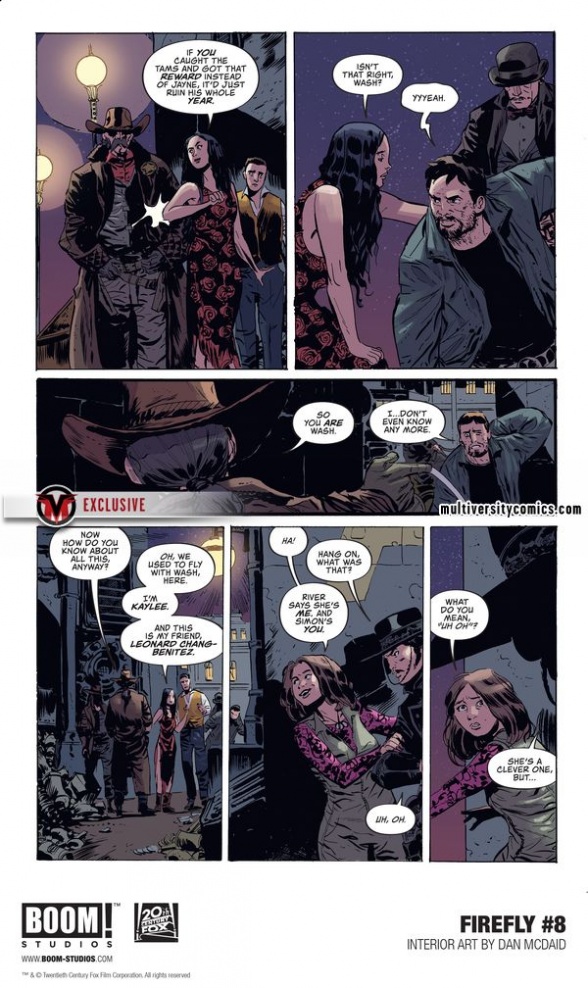 Your First Look at FIREFLY #8 From BOOM! Studios
Exclusive Look at the New Adventures of the Biggest Damn Heroes in the ‘Verse in July 2019

Zoe and Mal are missing so it’s up to the rest of the crew and their new friend, the gunslinger Leonard Chang-Benitez, to save the day! What can a former preacher, jokester pilot, soft-hearted engineer, proper Companion, and two fugitive siblings do to get their crew members back from a bloodthirsty gang of thugs and a militia of underground Browncoats? Actually, a lot, it turns out. But there’s danger at every step and if anyone makes a wrong move, the whole plan will fall to pieces in an instant!

Created by Whedon and set 500 years in the future in the wake of a universal civil war, FIREFLY centers on the crew of Serenity, a small transport spaceship that doesn’t have a planet to call home. Captain Malcolm “Mal” Reynolds, a defeated soldier who opposed the unification of the planets by the totalitarian Alliance, will undertake any job — legal or not — to stay afloat and keep his crew fed. Thrust together by necessity but staying together out of loyalty, these disparate men and women are seeking adventure and the good life, but face constant challenges on the new frontier, such as avoiding capture by the Alliance, and evading the dangers you find on the fringes of the ‘verse.

FIREFLY #8 is available July 17, 2019 exclusively in comic shops (use comicshoplocator.com to find the nearest one) or at the BOOM! Studios webstore. Digital copies can be purchased from content providers, including comiXology, iBooks, Google Play, and the BOOM! Studios app.

Available now, Firefly: Legacy Edition Book One collects previously released Serenity comics for the first time under one cover in a new value-priced format as Mal & the crew ride again in these official sequels to the critically acclaimed Firefly television series and Serenity film.

FIREFLY is the newest release from BOOM! Studios’ eponymous imprint, home to critically acclaimed original series, including Once And Future by Kieron Gillen and Dan Mora; Faithless by Brian Azzarello and Maria Llovet; Abbott from Saladin Ahmed and Sami Kivelä; Bury The Lede from Gaby Dunn and Claire Roe; Grass Kings from Matt Kindt and Tyler Jenkins; and Klaus from Grant Morrison and Dan Mora. The imprint also publishes popular licensed properties including Joss Whedon’s Buffy The Vampire Slayer from Jordie Bellaire and David Lopez; and Mighty Morphin Power Rangers from Ryan Parrott and Danielle Di Nicuolo.
Continued below

For continuing news on FIREFLY and more from BOOM! Studios, stay tuned to www.boom-studios.com and follow @boomstudios on Twitter.

ABOUT BOOM! STUDIOS
BOOM! Studios was founded by Ross Richie in 2005 with the singular focus of creating world-class comic book and graphic novel storytelling for all audiences. Through the development of four distinct imprints—BOOM! Studios, BOOM! Box, KaBOOM!, and Archaia—BOOM! has produced award-winning original work, including Lumberjanes, The Woods, Giant Days, Klaus, and Mouse Guard, while also breaking new ground with established licenses such as WWE, Mighty Morphin Power Rangers, Cartoon Network, and The Jim Henson Company properties. BOOM! will also bring their original series to life through unique first-look relationships with 20th Century Fox for film and with 20th Television for the small screen. Please visit www.boom-studios.com for more information.