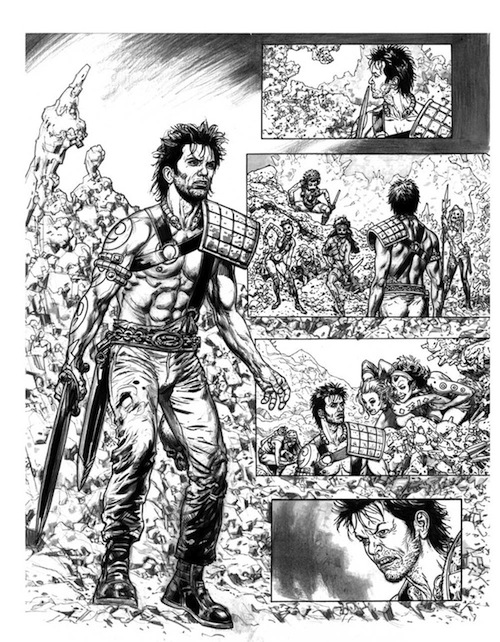 This morning we have some exclusive art from “2000 A.D.,” celebrating the return of Glenn Fabry to a character he hasn’t drawn in over 20 years, Sláine the Barbarian.  Fabry’s reputation was sealed by his Sláine work, including “Demon Killer,” “Time Killer,” and “Sláine the King.”  American audiences no doubt know Fabry for his work painting covers for “Hellblazer,” and “Preacher,” as well as doing interior work for “Sandman: Endless Nights,” “The Authority,” and much more.

Check out these beautiful pages, and then read the full press release below! 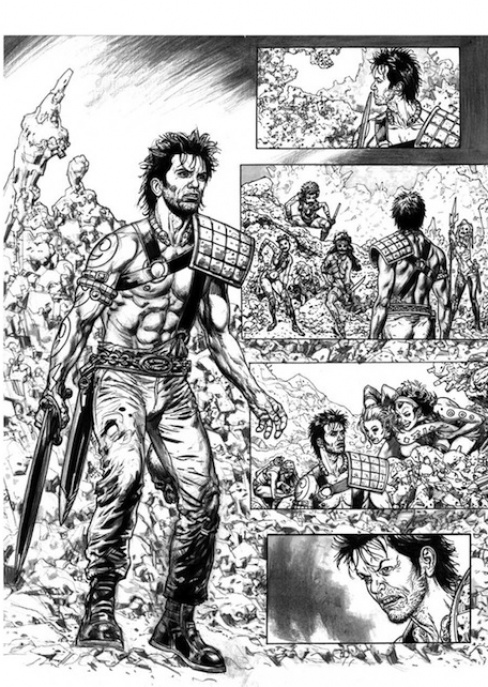 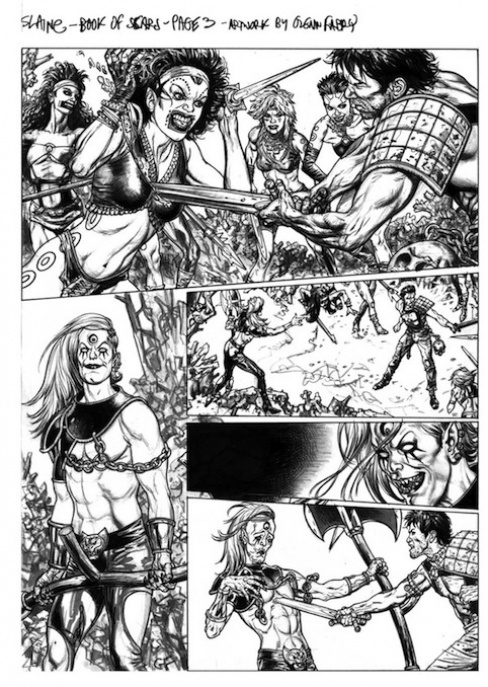 New Sláine the Barbarian series begins next week with variant covers and episodes by Bisley, Fabry, and McMahon.

For 30 years he’s been carving his way through the enemies of the Land of the Young, and now Sláine the Barbarian is back with a brand new series starting next week in 2000 AD.

Written by the creator of 2000 AD, Pat Mills, Slaine: The Book of Scars also marks the return to the pages of the critically-acclaimed comic book of the biggest artists to have worked on Sláine over the past three decades – Simon Bisley, Glenn Fabry, and Mick McMahon.

The story begins in 2000 AD Prog 1844, with Clint Langley’s tribute to the late Sláine artist Massimo Bellardinelli. This issue comes with variant covers by Langley and the new ongoing Slaine artist, Simon Davis.

Prog 1844 will be available on 7th August from UK stockists and in North America through Diamond, as well as DRM-free digital from shop.2000ADonline.com and the 2000 AD iPad app.

With a combination of authentic Celtic mythology, stunning artwork, and inventive writing, Sláine Mac Roth and his treacherous dwarf servant Ukko are some of 2000 AD’s most popular characters.

In Tir Nan Og – the Land of the Young – the barbarian warrior united the tribes of the Earth Goddess and became the first High King of Ireland. Fighting for the Goddess in other eras, he returned to his own time to save his people from the Fomorian sea devils. Now, he’s a wanderer and a sword-for-hire, but is his past about to catch up with him?

Sláine: Book of Scars will be quickly collected up into a special 30th anniversary hardback book, due out in November, along with a gallery of Sláine covers and additional material in a great collector’s item that’s not to be missed by fans of great storytelling, art and warp spasms everywhere!

It was Bisley’s breakthrough painted work on the incredible Sláine: The Horned God that brought the character to international attention in the 1980s, and 2000 AD is delighted to have him return to the strip that made his name. Fabry also cemented his reputation on the strip with incredibly detailed work on Time Killer and Sláine: The King.