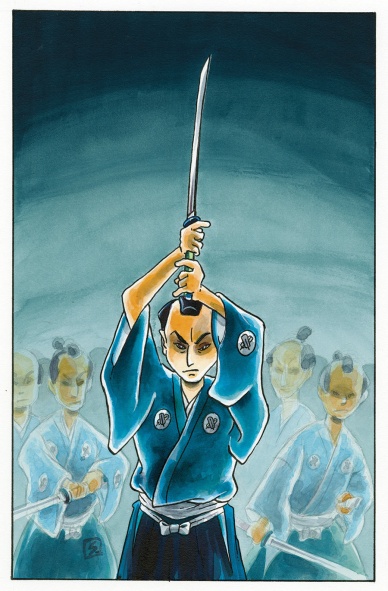 We are very excited to share a preview of the first issue of Stan Sakai and Mike Richardson’s “47 Ronin,” a new miniseries from Dark Horse debuting in November.  It’s historical fiction based on the true Japanese legend of Lord Asano, sentenced to commit ritual suicide, and his 47 loyal warriors who swore an oath to avenge him.   If you follow our monthly “Soliciting Multiversity: Dark Horse” column, you already know that this is one of the books I am looking forward to the most, and much of that excitement is due to the involvement of Stan Sakai.

Stan Sakai is a man of many distinctions.  He has earned no less than four Eisners (with an astounding 21 nominations), five Ursa Major Awards, two Haxtur Awards, a Silver Inkpen Award, a National Cartoonists Society Comic Book Division Award, an Inkpot and a Harvey Award.  He’s even earned something called a Cultural Ambassador Award, which is… I’m not exactly sure, but it sounds very distinguished!  He began his career as a letterer (his skill at which has earned him several of the aforementioned awards), most famously for Sergio AragonÃ©s and Mark Evanier’s “Groo the Wanderer.”  But perhaps his greatest distinction of all is the honor of creating the longest-running single-creator comic of all time, “Usagi Yojimbo,” the eponymous tale of a rabbit ronin (a ronin is a samurai with no master) and his adventures in an anthropomorphized version of feudal Japan.  Because “Usagi Yojimbo” is heavily influenced by the real-life sword-master Miyamoto Musashi and Japanese folklore, Stan Sakai already has decades of experience drawing epic tales based on ancient Japan, and will undoubtedly draw heavily on that experience for “47 Ronin.”

Mike Richardson is the founder and president of Dark Horse Comics, co-creator of “The Mask,” and author of the Dark Horse miniseries “The Secret.”  He also wrote the screenplays for “Timecop” and “Timecop 2,” and has produced many of the film adaptations of Dark Horse properties, including “The Mask,” “Hellboy,” “Barb Wire” and “Alien vs. Predator.”  While he may not have won as many awards as Sakai, he did earn an Emmy nomination for “Hellboy: Sword of Storms,” which is an impressive feat in its own right.  Between all of that, the founding of the largest independent comic book/manga publisher in America and ownership of retail chain Things From Another World, he has had quite the distinguished career as well.

This is a project the creators have taken very seriously, with Sakai traveling to Japan to visit many of the actual locations in which the story is set.  He’s paid special attention to designing period dress and architecture to make the book as accurate as possible.  The team has also consulted heavily with Kazuo Koike, creator of the extremely successful “Lone Wolf and Cub,” and one of Japan’s greatest manga masters.

But you didn’t come here to hear me talk, let’s check out those beautiful preview pages: 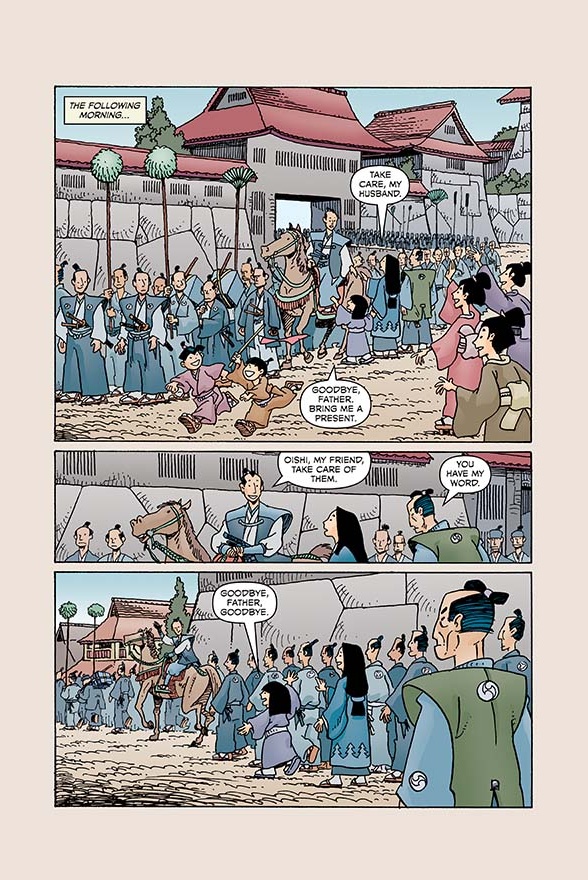 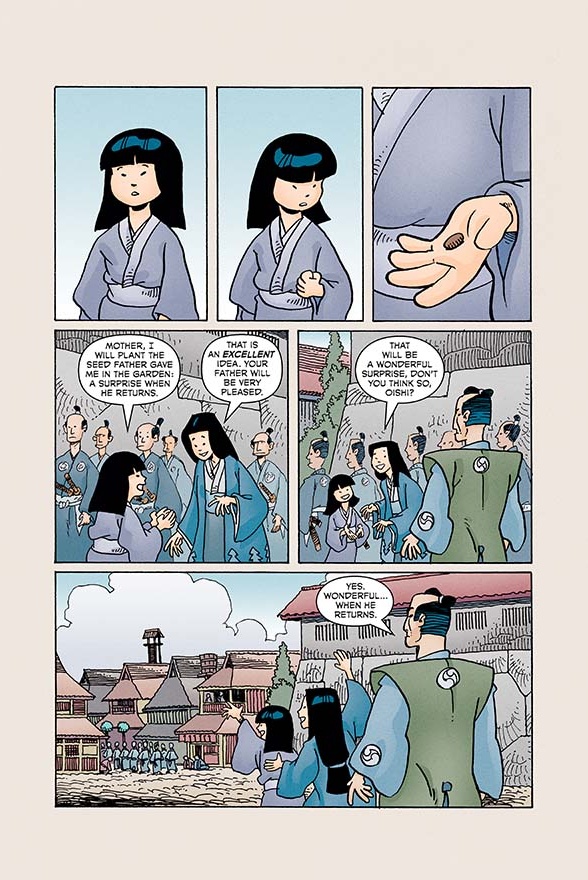 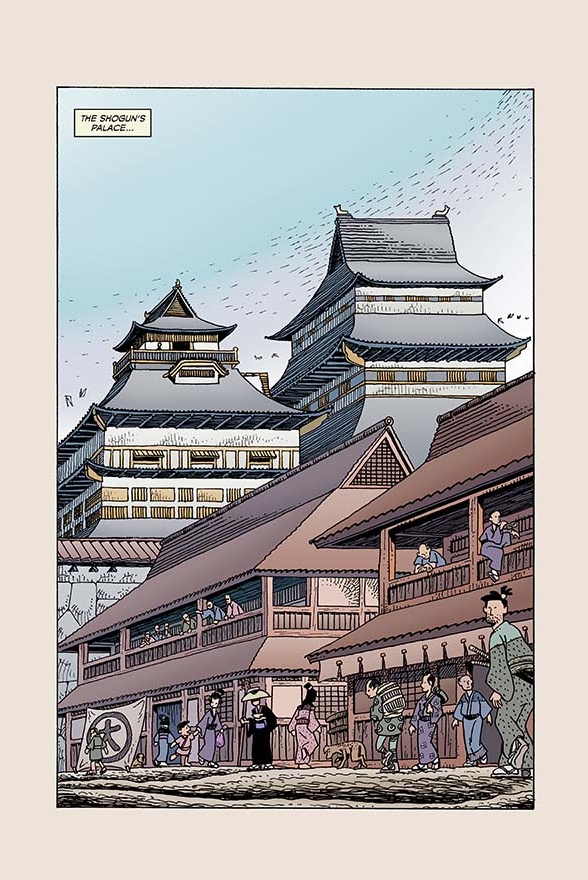 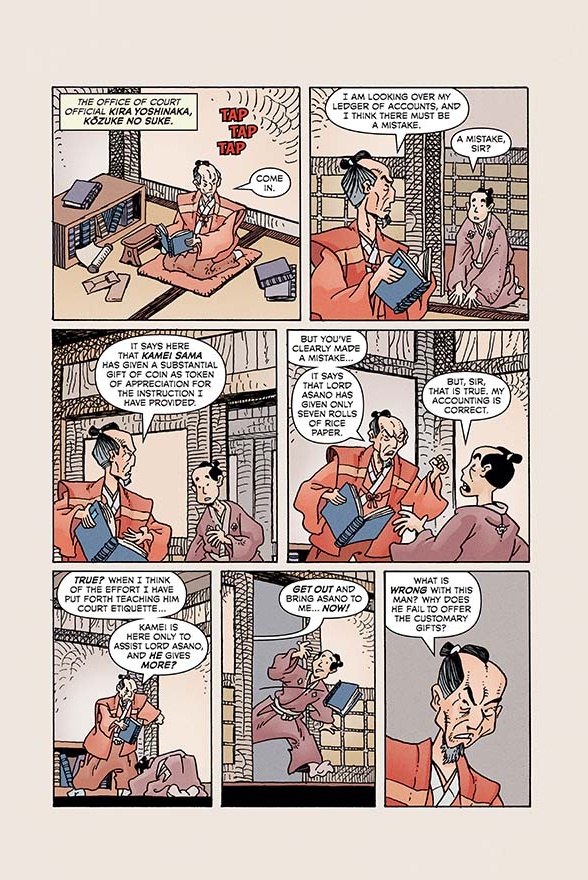 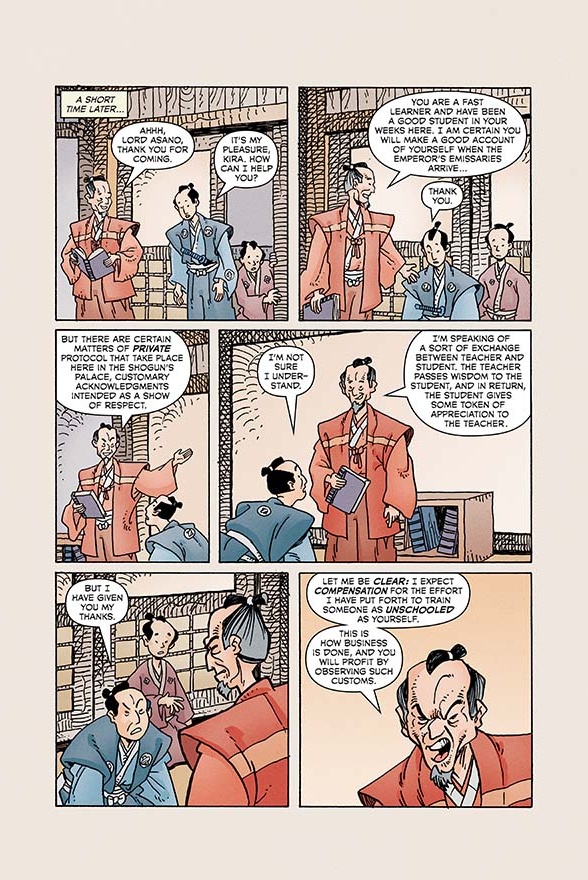 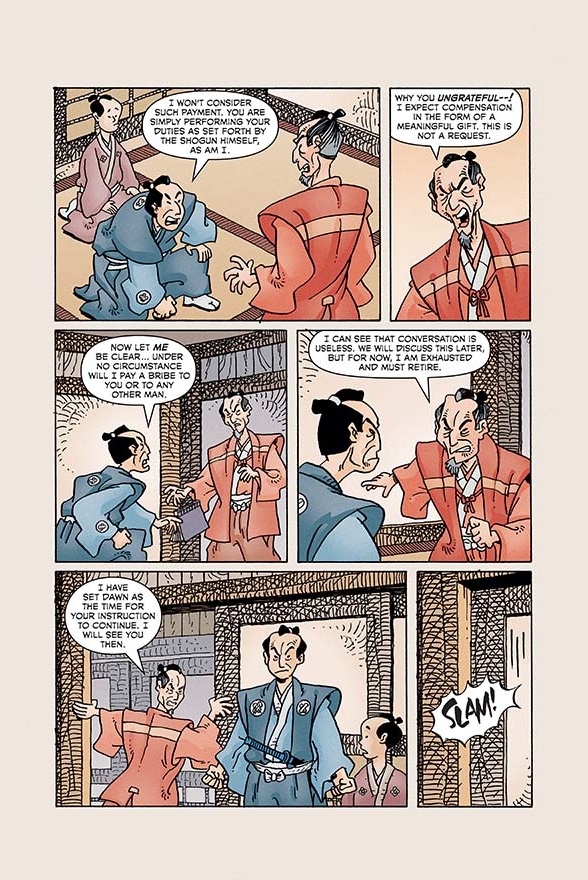 Here is the solicitation:

Among the best-known tales in Japanese history, the legend of the 47 Ronin and their epic mission to avenge their disgraced master epitomizes the samurai code of honor. It has been said, “To know the story of the 47 Ronin is to know Japan.” Retold through the ages, the legend at last comes to comics in a meticulously researched and beautifully illustrated miniseries from Mike Richardson, Stan Sakai, and editorial consultant Kazuo Koike! Recounting this sweeping tale of honor and violence in all its grandeur, chapter one details the tragic incident that would seal the fate of Lord Asano and set forty-seven of his vassals on a years-long path of vengeance!

“Sakai’s artwork is still as stellar and simple as you know it to be. His characters own their space on the page and his composition is so effortlessly meaningful.”–ComicBookResources.com

Look for “47 Ronin” #1 in your local comic store November 7th, or add it to your pull list so you won’t miss a single issue!